I doubt it was left until yesterday to decide if he was going or not, the likley story is that he knew ages ago and the info wasn't released to the press.

*CONSPIRACY THEORY* Perhaps they didn't circulate the info in the press until we had a striker lined up behind the scenes?

However if Defoe even gets a minor injury we are fucked. I don't like the idea that it forces our hand to buy a striker, but I can't see any other option apart from buying or loaning for 6 months.

Perhaps we should bring this little fella out of retirement?

Photoshop surely? He appears to be doing some sort of goal celebration. That ain't right.

ollieXcore said:
Erm, is the thread title supposed to be some sort of wordplay/pun? Because it doesn't really work. Like, on any level.
Click to expand...


As a connoisseur of horrible/failed puns, this is a fine example of the genre, especially when you consider Adebye-bye was so near at hand.

penpen said:
As a connoisseur of horrible/failed puns, this is a fine example of the genre, especially when you consider Adebye-bye was so near at hand.
Click to expand...

Adeba-going" is so bad..I love it.

penpen said:
As a connoisseur of horrible/failed puns, this is a fine example of the genre, especially when you consider Adebye-bye was so near at hand.
Click to expand...

Don't hate, appreciate. As said, it's so bad it's good, 'twas intended.

YidoBuckler said:
Well way to make me look stupid with that moment of genius
Click to expand... 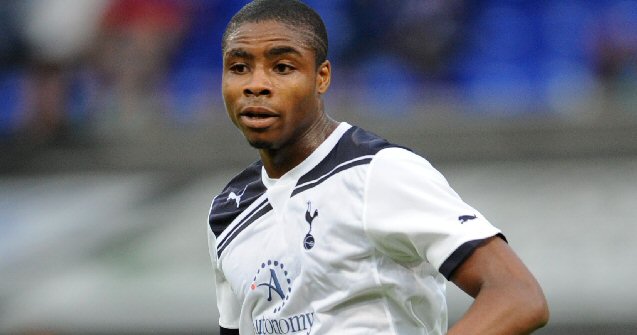 
Yep, scored 2 for the development squad recently, and a lot more experienced than the others.

Have we shown him the Adebay-door?

Emmanuel Adebayor admits Tottenham boss Andre Villas-Boas may not be happy with his decision to play in the Africa Cup of Nations.
The Togo striker initially refused to play in the tournament due to a row over team security and unpaid bonuses, but he has since patched things up with his country and will travel to South Africa after Saturday's Premier League game with QPR.
His absence will leave Spurs with Jermain Defoe as their only senior striker, although Villas-Boas has always insisted he would be happy to let Adebayor go.
But the 28-year-old told africatopsports.com on the Togo Football Federation's website: "That is what he said to the press, but not what he said to me."There is a difference between what you say to the press and what you say in private."
Adebayor's initial fears were raised over the possibility of the team being subjected to a similar attack to the one that took place in 2010 in Angola.Three people, including the Togo's assistant coach, were killed when terrorists ambushed the team's coach. Adebayor hid under a seat and survived the attack."In 2010 I wanted to go to the African Nations Cup to win and you saw all that happened, how that turned out. I hope this time will be better for me, for my team-mates, for all of Togo."

So he's definitely going, something tells me if we don't buy a striker in this January window we never will- I'm feeling positive however.

dmartins13 said:
He doesn't go out of his way to be liked does he
Click to expand...


HE DOESN'T GIVE A SHIT WHAT WE THINK... he probably hates us!

This, after all, is his parting gift for the ORIGINAL Adebayor song...
y'know, the one that mentions his Mum and Dad's professions... THIS IS WHAT SOME SPURS FANS GET FOR BEING MOUTHY CUNTS... 2 months of JUST ONE RECOGNISED STRIKER!

Enjoy it Spurs fans... we've reaped what we've sewn! ...unless we sign Leandro Diamio, in which case, all bets are off!