Come here to laugh at Dippers

No as Chirpy is a Cockerel

Had to listen to a Liverpool podcast in my mates car, think it's 'the Redmen' or something shit (I make him listen to TFC

).
Full of hypocrisy stating jems as we have a massive wage bill and Levy is like a mini Abramovich

my favourite part though was a 5 minute discussion about Martin Skrtel's possible move to Citeh. They said something like; "Weeeellch, Marten has beeeen a grrate grrate playyerch for oos this yeeear, bit thatxs it. Hee has beeyn shite for the last threee yeears, I meean If Citeh offerch oos £20 miillionn yuh caaaant turn that dowun becoos he has onley had onuh goood year. Ploos wee onley bauhgt him for £5 million, and hee is a world class center haalf. Wee could buy anovthaa worlud classs centre haalf for £5 million and be £15 millionch uop."
Basically they went on for a while that Skrtel has been shit for the three years before this one and said it takes time to flourish as a cb, then assumed they could sign an already world class cb for 5 million they signed him for because he is world class now

This looked a lot better in my brain

BUYLEDLEYNEWKNEES said:
Had to listen to a Liverpool podcast in my mates car, think it's 'the Redmen' or something shit
Click to expand...

That would be in my top three of my fucking hell!

Benjoss said:
Can't say I hate them that much.

But I do hate the fucking London born fans who only fucking support them because they were good when we were kids.
Click to expand...

This. And the twadpieces who 'announce' their support like it carries some form of weight, like we're supposed to fawn all over them at the mere mention of the rat-infested shitehole.

"The man who fucked up TFC" - Mick Cooper

Sweet baby Jesus. If they sell Carrol at a big loss then they'll officially rubber stamp their status as the biggest laughing stock in English football. In a city where unemployment runs at stupid levels, Liverpool FC's activities are tantamount to standing outside the Shankley Gates burning £50 notes.

I'm pleased we dodged the Brendan Rodgers bullet, his Billy Big Bollocks attitude is a bit much for a manager with no real credentials.

LLB Part Deux said:
I'm pleased we dodged the Brendan Rodgers bullet, his Billy Big Bollocks attitude is a bit much for a manager with no real credentials.
Click to expand...

Pretty sure I have posted this elsewhere, but it would seem appropriate to tie up some loose ends:

Add undeserved sense of self worth.

Steep with a dose of 'victim mentality'

Add bitterness at not making 'top 4', despite referring to the club as a 'top 4 club'.

(variation - remove the stupid accent, the not making top4 and add 'smugness' to make a gooner) 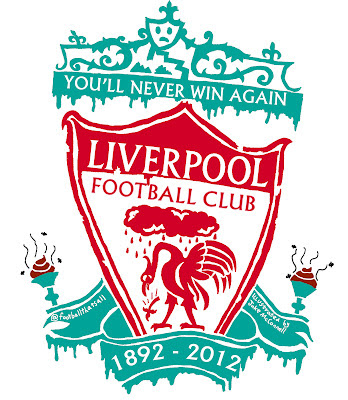 Joe Allen, 22, can leave Swansea for £15m thanks to a clause in his contract but only to a 'top five' club, which includes Liverpool.
Full story: Daily Mirror
Click to expand...

Supporter
Been to Liverpool once , it looked like a shithole to me and i did not understand a word they said

and then came Suarez

I hate Liverpool the club, never been out in Liverpool itself but I have always wanted to smash the back doors in of one of their fit birds...they seem to have fucking loads and most of them seem pretty fucking stupid

That picture is brilliant, but I fear we are building ourselves up for regret again!

Joe Allen, 22, can leave Swansea for £15m thanks to a clause in his contract but only to a 'top five' club in the most cuntish fans table' which includes Liverpool.
Full story: Daily Mirror
Click to expand...

It's amazing. Can you a thefightingcock.co.uk watermark on that?

I want to spread it about. Made me laugh.