What a joke another nail in the coffin off football

I'll always love spurs but high level football is becoming more and more un watchable, it's all about money and the common fan is getting forced out 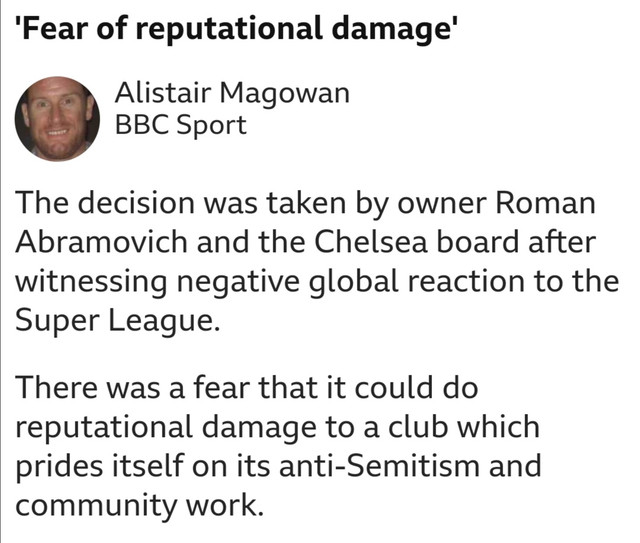 Chelsea have a reputation to damage?
Pride in their anti semitism work?
Bah ha ha ha, good one

Cranston said:
And the fucking brass nutsacks on Levy to sign up to this when we haven’t won shit.

Mourinho will probably claim he managed Tottenham into the Super League.

Raiders said:
Reading through this, I am embarrassed. I didn't expect anyone to support it but there seems to be people who actively do. More sad is that there is a lot of people who clearly would go a long with it. The selfishness and arrogance is unbelievable. The bizarre talk about deserving to be elite. The pride at being picked by greedy fuckers. It is devastating reading it.
I have asked a very simple question a few times without answer, would you support it if we weren't involved?
Click to expand...

I'm embarrassed for people saying I stand with Gary Neville and he speaks for all fans. No he doesn't, he's a self serving weasel. Hypocrisy runs right through everything he does.

Him and his millionaire mates ploughing money into Salford, paying extortionate wages and having players drop down leagues to play for them. That's a fair and level playing field. Exactly the same as the Chavs and City investment all those years ago. Neville's dad was involved with Bury for years yet he did fuck all to help them.

He constantly bleats on about manager's needing time yet he goes through them quicker than Levy FFS. The media is full of people like Neville.

Then we have Uefa and FIFA , corruption goes hand in hand with these corner boys. Taking World Cup's to Qatar to grease their own hands. The Champions league, it's filled with teams who come 2nd, 3rd and 4th in their own league's. Why? Because they make more money. Why are PSG not signing up? It's certainly not to do with morality, more like their owners are in bed with FIFA due to getting the World Cup in Qatar.

So to me football has been a shameless, money grab for years. It greatly amuses me now to see the outrage of people. They literally have buried their head's in the sand for decades.

Richard Jolly
@RichJolly
·
55 min
There is a growing possibility that Jose Mourinho may be the only European Super League manager ever to be sacked. The Special One.

Half an hour ago, I was outraged at this disgraceful moral farago.

Col_McCafferty said:
You Yanks should've stuck to your own sports, a dark day when your lot stated to take an interest in the Beautiful Game.
Click to expand...

This anti Yank sentiment has been growing throughout this thread.
A handful of us happen to really appreciate proper football.
I know youre looking for someone to blame for this, but it isnt our fucking fault... 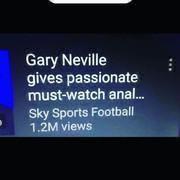 Football is a joke, but the hypocrisy from Sky is hilarious. Those cunts orchestrated the start of the Premier League. Fuck them!

City fans apparently felt sick and that something was ripped away from them after the ESL announcement.

Seriously, football wants to destroy itself. This rubbish, VAR, constant messing around with European competitions, oil money clubs winning everything. I'm as close as i've ever been to knocking the whole thing on the head. Its just all greed

If this happens I’d be done with top level football and for sure done with Spurs. It’s a disgrace we’re involved with it.

Levy taking the piss, wants money and acclaim without ever actually funding a team that can earn it on its own.

Coming up on Super Sunday;