Is this the dumbest Spurs team ever?

Just to be clear, I was talking about footballing intelligence. A player can have an IQ of 160 and be an idiot when it comes to simple decisions during a game.

Admittedly I also think many of our players are just generally thick, though thankfully not at Darren 'to beat us you have to score more goals than us' Bent-levels.

Thick, self centered and under zero threat of their cushy lifestyle coming to an end any time soon.

One look at the two ballsacks in charge of player sales/recruitment and they know they don't have to bother trying. It's the managers fault innit.

Maybe we should get some rocket scientists in the team - then we will win stuff. 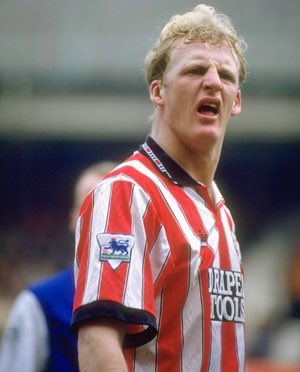 This club needs to be educated on how to be a winner not serial runners up . And yes this is the dumbest team ever just ahead of some of those terrible teams in the 90s

Dr Rocktopus said:
Apart from Kane, Alderweireld, and Lloris this seems like a collection of downright morons. Even if you leave the question of technical ability aside the vast majority of our players seem incapable of making the most basic of decisions.

I'm not saying we need a team of geniuses, but our players really do seem a bit thick.

Take Gazza for instance , in footballing terms he was a genius
Outside the game he had the IQ of a flip flop
I have met several sportsmen who on the field could perform tactical computations and pick options and execute them at bewildering speeds but could barely tie their own shoelaces.

It's my belief that the current squad malaise is a motivational issue rather than a lack of sporting intelligence.

Mick Cooper said:
Intelligence and sporting intelligence are unrelated in my experience
Click to expand...

Your experience as PL manager / player?

I don't think they're any thicker than the average footballer, and have better footballing ability than most other professional footballers.
(except Sissoko and Doherty, sorry guys).

It's not as if Liverpool and Man City are stuffed with Mensa members.

It's totally down to the coaching, the (lack of) engrained attacking and defending routines, lack of confidence leading to timidity and mistakes, and the team ethos.

Yes, a clear out is needed as many players are jaded and stagnant, but the biggest gap is obviously a decent manager.

General dumbness combined with lack of leadership which has bred the wrong attitude.

When during a late attack Lamela spaccered the ball out for a throw whilst trying a rabona noone went for him. Noone went for him and said - What the fuck are you doing, you fucking idiot?

Are they scared of him? Did they themselves think it was an appropriate thing to do? Or do they simply not give a fuck? All of the above IMO.

They're definitely a "special" group of players we have at the moment.

The team has problems and currently are the dumbest Spurs team of recent seasons. Part of this is down to poor coaching and also poor recruitment. Since the summer of 2017 there seems to be absolutely no idea in player recruitment. Then there is the fact we keep players way too long Lamela has been at Spurs for eight seasons and has spent most of it as a useful squad player and he was once our most expensive signing.

So my belief is the problem is at the very top of the club with Levy and Hitchen with a lack of an idea or plan. We sacked Poch then we went and hired Mourinho who did not fit with the way we were playing and was known for falling out with players, we then went and sacked Mourinho a week before the final.

No but it is the dumbest managerx sorry coach !

I went to school with Danny Thomas, and his brother Valmore, neither of whom were the brightest bulb in the chandelier, ditto a guy called Noel, who played for Sheffield United for a short time

My comment had nothing to do with management
it was an observation about the relative intelligence of people playing the game, which is what the thread is about.

I'm on subject - you however are just trolling me, because that's all there is in your life. Pissing people off in the knowledge that you are 7,000 miles away and hiding behind your keyboard

Mick Cooper said:
I went to school with Danny Thomas, and his brother Valmore, neither of whom were the brightest bulb in the chandelier, ditto a guy called Noel, who played for Sheffield United for a short time

My comment had nothing to do with management
it was an observation about the relative intelligence of people playing the game, which is what the thread is about.

I'm on subject - you however are just trolling me, because that's all there is in your life. Pissing people off in the knowledge that you are 7,000 miles away and hiding behind your keyboard
Click to expand...

No one is afraid of you here, Mick - sorry to tell ya

A lot of these guys played under Poch and they didn’t seem dumb then.

Some of Poch’s late additions and Aurier and Tanguy do seem less smart but I don’t think it’s just down to the players.

Yes, I am talking about Mourinho.

ArcspacE said:
No one is afraid of you here, Mick - sorry to tell ya
Click to expand...

I have absolutely no idea what you are on about, and frankly - I couldn't care less.

Mick Cooper said:
I have absolutely no idea what you are on about, and frankly - I couldn't care less.
Click to expand...

You keep implying if you knew me - you want meet up for a fist fight. Please don’t make me laugh and have a word with yourself please. Is just the Internet - even for a 75 year old

1882 said:
The irony is that Dier and Aurier are possibly two of the more intelligent people in the playing squad (Dier speaks about 3 or 4 languages doesn't he?) Whilst Aurier wears glasses off the field, so by virtue of that fact alone means he MUST be bright!!

Yet both are consistently 2 of the stupidest footballers in our squad!!

And winks..he's always got this look with his eyebrows up like he is thinking something. Guys an idiot.

My mind goes back immediately to Steve Heighway (Liverpool) who was famous in the 1970's, for having a degree, because the sport of football has always been knee-deep in morons.

Dr Rocktopus quite rightly says, IQ and Sporting Intelligence have absolutely nothing to do with each other. Just look at our elite athletes to see the living proof - Paula Radcliffe being a prime example. I think that being a bit thick probably helps, especially when it comes to the monotony of daily training - who, with half a brain, would choose to run 10 miles every day?

CollyQC said:
So many lists here about players that are dumb and players that need to be sold. Y'all left out Lamela! Shame on you for such an oversight.
Click to expand...

That’s because he is quite the opposite of footballing stupid.... a lot of South American footballers have this intuition as to just how far they can push gamesmanship. Lamela is a paragon of this .