Club legend in my book

Andersen said:
I never understood the sentimentality when players leave. They are all high paid mercenaries BUT the ones that really make a statement; Gareth Bale , Modric . Yes but fuck me if Verthongen . Get over it and fast. It is embarrassing,

You're entitled to your opinion, but think you're just being confrontational to get a reaction/start a row by making this post. Why would anyone be embarrassed by being upset that one of our loyal players has come to the end of his time with us, unlike Modric and Bale who buggered off as soon as Madrid came sniffing round.
And there was never any evidence that he did play away, it was just a internet rumour that became a bit of a joke. Eriksen wanted out, and hardly put a performance for us last season.
Last edited: 27 Jul 2020

That's the difference between an ingrown toe nail and a broken leg..
Last edited: 26 Jan 2016

Putting this here as don't know where else to put it.
Been a bit behind with reading and posting as in Malta meeting my newly born great-nephew. When he cries, I sing the Jan/Toby song to him and he seems to really like it. He also likes the Poch is magic one, but not keen on Dele's.
Poor kid. Only 5 days old and he's already been indoctrinated. His first words are going to be Yid Army

Like Eric Dier knows how to use a phone. I’m calling bullshit.

Really felt for him tonight, never nice seeing the writing on the wall...

I'll be gutted when he goes, but it's the right time for him to move on. Glad he's not going to another English club, wish him nothing but the best for the future.
Would love to see him back in a coaching capacity in the future.

InBK said:
Sad he’s going, but time catches up to all. I’ll never forget him dropping in at LB against Dortmund in CL and being the best player on the pitch. Hope one day he gets the send off he deserves.
Click to expand...

Not sure if posted already - Jose on Jan.....and a subtle invite to coach at Spurs.....and a name check for youngsters training with first team.

That's really sad to hear but good on him for speaking up. There was obviously something not right with him last season because his performances were so strange.

I can't help but feel he is taking a big risk to his future health by continuing his career, however. A head injury that takes 9 months to clear up sounds like something that should have pushed him towards retirement. I pray that he doesn't end up with early onset dementia or any of the other illnesses associated with this type of injury.

i know what Vertonghen did was on the fence morally, (although watching the game back today, those two had a massive battle going on throughout the game. Last night in the crowd it was hard to tell it was the same two over and over) i must admit i fucking love that whole incident. Jan doing his bit for the team, Dawson swinging round in "DID YOU JUST NUT MY MATE" way, Soldado's almost schoolboy "OMG SIR, HES JUST FLOORED JAN, SEND HIM TO THE HEAD"
Then in the little fight after, Sandro gives the "you better fuck off now before i do you in son"
then Naughton pulling him away "Leave it out mate, its not worth it its not worth it"
Fryers trying to look involved so he doesn't seem to be bottling it, in a sort of 'small kid hiding behind the big kids' kinda way (even when Ade is holding him back he looks too scared to go anywhere near him)
and then Ade comes along and bear hugs the motherfucker and starts counselling him, gently whispering into his ear "its ok, calm down. you don't need to do this. you're better than this. violence won't solve anything."

But most of all, every single man in white there showed some fucking passion. It was glorious. first time I've seen them look like a team in a long time. Id much rather see that at the beginning of the game, than a stupid, forced, fake huddle.

Channing Tatum was solid today,looked really up for it. Great face during one of the celebrations. 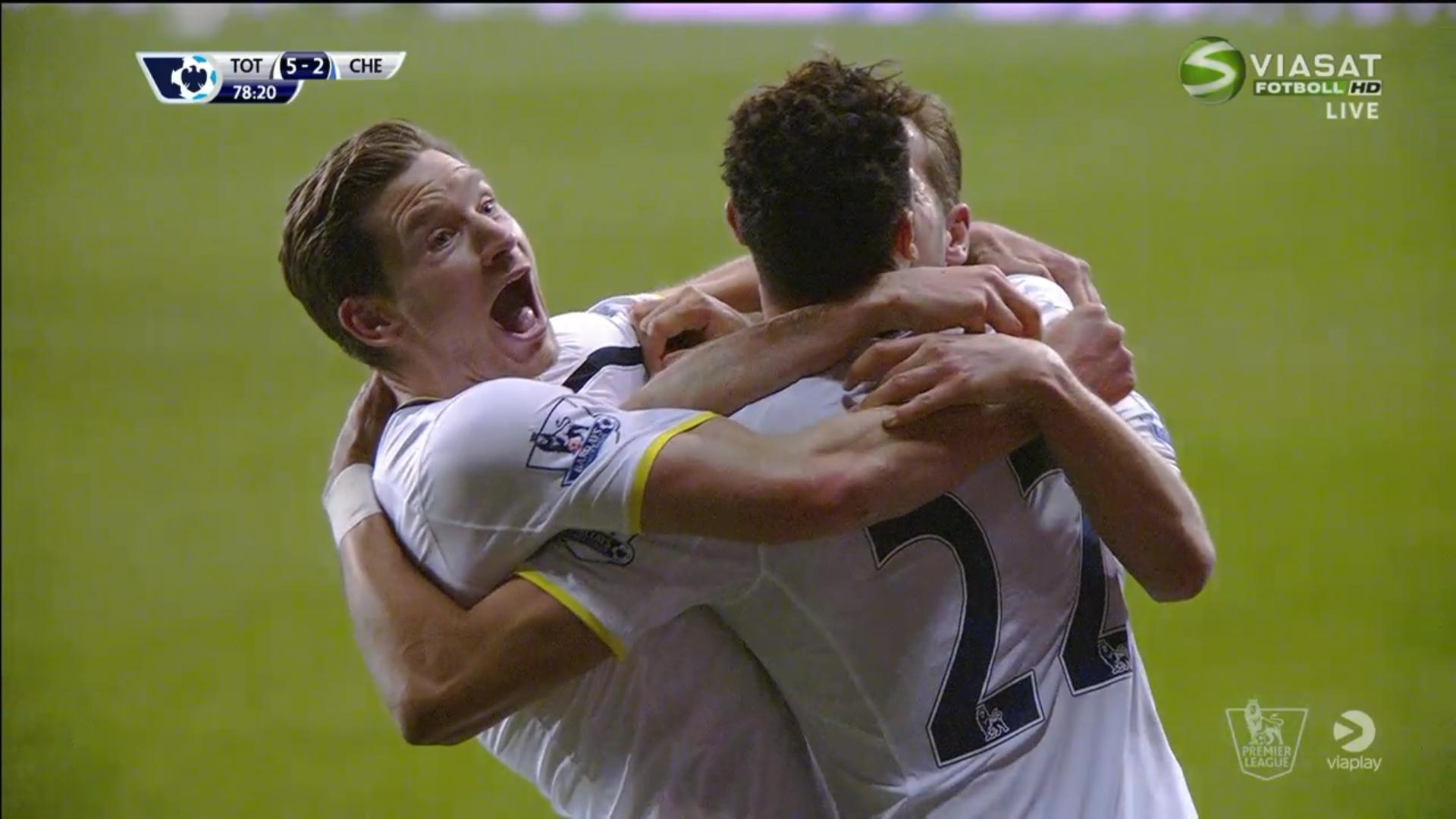 Feel this team Ladies and Gents, Boys and Girls. There is a connection and it is coming from our leaders on the pitch! I know you're reading this thread Jan. Feel the love bro!

Jan Vertonghen has stopped sulking and improved his mentality to become one of the best centre-backs in Europe, according to Mauricio Pochettino.

The Tottenham manager said Vertonghen's "mental aspect," particularly his body language, has changed since they started working together in 2014 and he described the 30-year-old as the club's most-consistent defender.

Vertonghen is one of just 14 players to have played every minute in the Premier League this season and his form alongside Davinson Sanchez has helped to mask the absence of Toby Alderweireld, who was injured for more than three months from November.

After a fine maiden season in England, Vertonghen struggled under coaches Andre Villas-Boas and Tim Sherwood in 2013-14 and footage of him lounging against the wall of the tunnel ahead of a 4-0 defeat at Liverpool epitomised Tottenham's apathy pre-Pochettino.

"He has improved in an aspect that was so important for him -- the mental aspect," Pochettino said. "Now he is a complete centre-back. We have worked a lot together to reach the level that he is at today.

"I remember his body language when I watched the game against Liverpool when [Luis] Suarez scored, the season before we came.

"He was slouched in the tunnel," said Pochettino, who stood up to imitate Vertonghen's relaxed stance.

"When I came, I told him: 'Why are you like that? You are here for a battle! You cannot show this body language -- you are a warrior!' It is difficult after showing this energy to go out and take part in a battle and fight.

"We worked a lot on this aspect and, yes, it is true that we clash a lot in training because he is clever and always has an argument and a reason why, but in the end I appreciate a lot his efforts in giving the team what we expect from him.

"It is good to praise him because he is a very good player who sometimes does not get valued enough.

"I am so proud that he has achieved this level today. Not only on the pitch but off the pitch. In my opinion he's one of the best centre-backs in the Premier League and in Europe."

Pochettino added that Vertonghen is fit enough to play for another decade until he is 40 and suggested the club will offer him a new deal before his current contract expires in summer 2019.

"He has unbelievably quality, physical condition, technique," Pochettino added. "He is so strong, he looks like a 20-year-old because when he runs he is fast, he is like my new dog -- a Rhodesian Ridgeback!

"It is easy for him to run. Physicality is his talent. It is genetic, it is his natural condition. He is an athlete. It is up to him but he could play until he is 40.

"The club believe that he needs to be rewarded. He's one of the players that deserves [a new contract]."

A source has told ESPN FC that Alderweireld's Tottenham future is in the balance after contract talks with the club broke down last month and the defender could be sold this summer.

Alderweireld's current deal worth £50,000-a-week expires in 2019 and he would like a long-term contract worth closer to £150,000-per-week, which Spurs are not willing to offer a player who turns 29 next month. Pochettino, though, insisted that Alderweireld is "still in our plans."

However, in comments that suggest Spurs are preparing for life without Alderweireld, Pochettino hailed Vertonghen's influence on summer signing Sanchez, 21, and claimed youngster Juan Foyth could become one of Europe's best centre-backs.

"We need to think of Juan Foyth too, he is 20 now and a great talent too. He only needs time to adapt himself to the Premier League. He is going to surprise many people. Juan is a great kid with a lot of quality to become one of the fantastic centre-backs in the Premier League and Europe too."

All of the above is very true, Foyth looks brilliant albeit in Cup games but I would love to see Super Jan holding a trophy above his head, has been threw alot

sammyspurs said:
Whoever took him out in training needs fucking shooting
Click to expand...

I reckon Aurier threw the ball in his eye