oski said:
Can't we just bask in the glow of victory a little longer instead of having a rematch so quickly?
Click to expand...

I still have the VAR song bouncing around in my head

Bill Madrid said:
I don't think the French add milk either, it sounds like English devilry to me, like adding chorizo to paella.

Pretty sure our Gallic chums just use eggs and butter.

Maybe a touch snail or frog perhaps
Click to expand...

Sort of thing I make for supper after a few beers

sammyspurs said:
Well this is the thing.....you have pundits, journos and fans alike. Everyone is the expert..

But at the end of the day, 10yr olds understand the game. People trying to make out like you need to be Steven Hawking to reeeaaalllly get it.
Click to expand...

There is a reason why the clubs that win things usually have some of the best managers and coaches working on tactics day in day out with their players rather than any old idiot with just just basic understand on how the game is player.

A 10 year old only understands the rules of the game, not the little details that can turn results of a match.

Still , no matter how brainy someone might be or think they might be, if they still think Sissoko is shit, their opinions are far too biased to be taken seriously.

ArcspacE said:
What a phenomenal night

Guido said:
The Times Tweeted out their pre-match article almost on an hourly basis before the game, I love it when someone gets it so wrong and especially after 7 mins

Mick Cooper said:
Boredom is setting in and folk have free time on their hands.

How are you Paddy, are you well?

What's your guess for today?
I reckon that unless Poch puts out two lines of 5 defenders, with our current standing pros, we'll get spanked if we try to play the Tottenham way.
Time for a pragmatic approach and go "The Full Santini"
Click to expand...

Joe Clash said:
Dunno mate, but I’ve seen you before. And no hat can cover up that shame. Awkward. 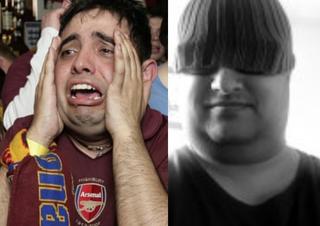 Did you take offence to my comment about looking like Ramsay Bolton? It wasn't meant as an insult but ok ochbye:

Mick Cooper said:
I hope you're right
But I'm still in favour of locking and bolting the door, we need all the points we can get
Click to expand...

While you are bolting the door make sure your on the outside looking in!

deadleyledley said:
This wasn't what I was expecting when I said can we get this thread to 200 pages

We kept the thread chugging along at a tricky moment tho. And any way, it's Sammy's fault, he brought the omelette trope to the table.

Any, back on point. Many City cunts have been correctly highlighted but I would also like to mention the cunt who "designed" his cardigan/hoodie abomination.

Back in the day my mum was a prodigious knitter. She used to have hundreds of weird knitting patterns like the one below. I'm sure the designer took his inspiration from one of these.

Saw an interview with Walker on the sky coverage.

Was quite interesting that it sounded like we sold him as opposed to him engineering a move.

Really good. Just going out again now. Here are some of your observations about the manager who has got us to the semi-finals of the CL. Get off my case you port sodden old mether. Have you noticed how even the more moderate posters are turning against you? This is what happens when you team up with the dog.

The main reason we get the hump with Levy is because he continues to appoint crap managers like Poch@AVB!

They don't work and he then fires them!

If you like supporting a team that is content to hover around 6th place then good for you.

I don't which is why I want Poch out.

I would take Moyes, Rafa even Tim rather than this clown!
He doesn't even rate alongside Pardew, Pulis or BFS!

Fair enough but tell me exactly what he's achieved as a manager!
Click to expand...

Bazali said:
My but you like insulting people on here rather than debate!

Or were you referring to Poch?

Whatever I still think he's a clown and, despite me asking exactly what he's achieved as a manager, no takers!

As for Moyes he wouldn't be my 1st choice but he did ok at Everton even qualifying for the CL!

As for him not doing well at ManUre well would anyone have done better following Fergie?

If he had been backed to the tune of £165 million like LVG has then he might have had a chance!

There I've made a few points without name calling etc
Easy really!

Bazali said:
Back to Poch though remember this thread towards the end of November next season when we're languishing half way in the prem!

But let's give him a chance eh!


My point about Levy is that he takes easy options, Poch, or takes a risk with damaged goods, AVB!

Tim wasn't my favourite but he had something about him unlike this clown!

Bazali said:
So we're looking like sliding down to 8th!

And this is progress?

A lot of you clever apologists for Poch who want to "give him another " season/chance etc would do well to remember Mr Ramos because if we keep this clown we will have a relegation battle next season!

And Arry will be too old to rescue us next time albeit he we'd be a distinct improvement on this idiot!

Apparently he got us to a minor cup final this season which we lost convincingly with Chelski barely having to break into a sweat but that's enough to let Poch carry on!!!

Well perhaps we should have kept Tim following that flawed logic!

I've not been posting here for long but generally it's a good board.

It's amusing though when you post something certain individuals disagree with they don't offer debate but post insults such as "buffoon" or "clueless" or childish little pics of babies etc BUT when you then ask a sensible question such as "what exactly has Poch achieved as a manager?" there's no response!


I don't think for one minute that this squad is worthy of top 4 whoever is in charge but the quality of football last season was generally abysmal with the 2 home games against the squatters and the Chavs excepted!

Lamela and Dembele would be class players with a decent coach but, sadly, this won't happen with this clown in charge!

So remember this post next November when we're in the bottom 3 if things stay as they are cos I will.

We downgraded when TS took over and we've managed to downgrade again with this clown!

But don't worry come December him and his "philosophies" will be gone but the problem will be that the season will be over!

Levy took a chance with AVB but at least he had achieved something as a manager but this twat?

Bazali said:
Fans pay a lot of money to attend games as I do

If I don't like some of the crap we play with this clown in charge then I won't make a noise.

Bazali said:
Do you honestly think we'll finish 5th this season with this clown in charge?

We'll be lucky to finish top 10 if he's still here by December which I don't think he will be!

All downhill now while he's in charge!

I'm Spurs and I do not 'hate' any of our players!

I do not even 'hate' our incompetent, stubborn manager!

Bentelab has potential as I've stated in previous posts but he hasn't yet realised it and won't do playing for this clown!

He needs coaching and to play in a system suited to him and this could apply to most of our players!

If Bentelab plays like a cunt giving the ball away needlessly making wreckless challenges I'll call him one or anyone else for that matter!

Some of us need to get real.

You get some posters saying yesterday's performance was 'great'!

It wasn't especially against a very poor side who let us have a lot of possession.

Yes we should have scored at least 3 goals but we didn't.

Yes the referee had a very poor game especially in the 2nd half where IMO he lost control and 6 yellows were ridiculous as it wasn't that sort of game.

Consider who we've played so far.

An out of sorts ManU side who were there for the taking and 3 poor to average sides.

We've only got 3 points!

Wait until we start playing some decent sides!

This game was just one more which is going to lead to Pooch's sacking by Xmas when we will still be embedded in the bottom half of the table and our season virtually over!

One thing that stuck out for me yesterday was Pooch waiting until 87 min to bring on the promising Pritchard for the headless chicken Mason!
That should have happened at least 20 mins earlier!
WTF was Pritchard supposed to do in 5 mins?


So no I don't hate Bentelab just the shite football we're playing!

Bazali said:
And if we hadn't have done it with Ramos we would have been relegated, make no mistake so no let's not review it after an entire season, get rid of this clown now.
For clarification I'm not saying we will get relegated with Pooch but mid table and no cups isn't good enough!

You see? You witter on about ‘support’ but the meaning of the word is lost on you. You wrote the guy off before he’d even got started. Who’s the bloke looking clueless now Borezali? Fucking hell - I don’t know how you have the brass neck to even post on here now. Just read the shit you’ve written. You’re an embarrassment - that and abusing our lady members. Nah, not for me. Even your mate can’t help you out with this one. Two of the rare posters with a negative reaction score - and that’s for a reason. No wonder you cling on to each other like faeces. You two are ruining this forum. The doesn’t go and the never been. Absolute shower.

For those who haven't read, you really, really should!

Spooky - on the money, every fucking time...
Click to expand...

Very well written. But my favourite part is the picture of Trippier shushing the Man City fans. Fantastic.

Big Muff said:
My nerves are shot but at least I’ve discovered that I can still bite my toe nails! COYS
Click to expand...

I see you’re a John Martyn fan, but are you Spurs? Asking for a friend.

The greatest game I ever saw, and we fucking lost....

No way should that have been a freekick to City, Wanyama didn't foul Walker there. Tripps woeful again.

Christ , we were a team. Wipes tear from eyes

Sir Alfred Conn said:
So what the FUCK changed by the Final??