Col_McCafferty said:
Ah but Napoli were still up against giants like Milan and Juve so it's wasn't as if they had zero competition.

The World Cup is still the pinnacle of the sport, please don't let Sky or BT tell you any different.

Win a CL and you're a great, win a WC though and your name passes into legend.
Click to expand...

Totti said:
It is still a great achievement regardless. It would have been like Newcastle being bought by those Saudis and become one of the riches clubs in the country and signing Messi.
Click to expand...

Jamie Vardy has to be up there after leading Leicester to Glory!

Is the CL really all that? I mean according to some on here we were shit under Poch and yet we still managed to reach a Final.

Col_McCafferty said:
Messi has never led his country to WC glory nor taken a team outside of the elite and made them Champions of their country. Twice.

In many ways his exploits for Napoli really show what a great player he was more so than '86.

Messi has been in his comfort zone at Barca all his career, surrounded by world class talents. Xavi AND Iniesta in the same team? No wonder Barca dominated as did Spain as well when those two were in their pomp.

Third CL title Messi won he had both Neymar and Suarez for company.

Messi is undoubtedly in the Top 5 players of all time but both Maradona and Pele are better.

The Messi fanboys should be gracious and accept this.

Completely agree.
Zidane is also in my top 5 for similar reasons. Players like Maradona and Zidane had that extra something that means they can drag a team kicking and screaming towards glory.

SchmoodSpur said:
The idea the World Cup is the peak of modern football is the biggest fallacy in the game.

The Champions League is exponentially better.

P.s. Pele was dogshit in comparison.
Click to expand...

Jenny Talia said:
The internet is turning up some gems at the moment. What happened to bring about this photo? 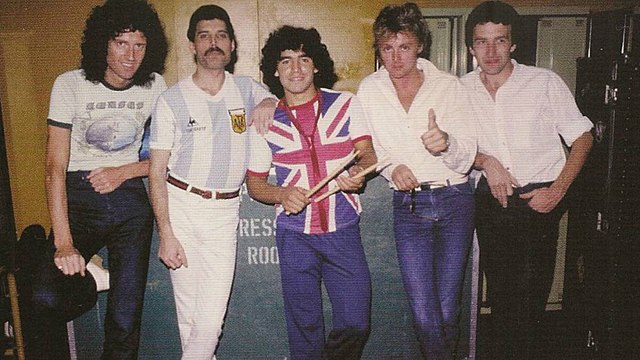 Top 5: Pele, Maradona, Messi, Cruyff and then it's really hard to pick.

From a British perspective I'd go for Best but someone in Portugal may pick either Eusebio or Ronaldo. German Muller or Beckenbauer and so on.

90% of Pele's appearances were in glorified exhibitions and the MLS.

I'm not Lineker's biggest fan but I doubt it was his intention to offend here, I think he's Tweeted it without realising how bad it sounds!

As for Diego RIP, greatest ever IMV. Can see arguments for Messi et al. but I reckon Maradona had the higher ceiling and would flourish in the modern game too. Why? Better protection, the balance tilted in favour of the forward, more fouls given, and the rubbish defending everywhere nowadays.

An insult that should be used more!

Napoli had been purchasing good talent for a few years before Maradona.

Maradona was like their Aguero. Before that Napoli had been like City buying the likes of Elano and Robinho in comparison. Maradona marked when they started spending more wisely.

This is complete bullshit.
There was Fernando Di Napoli and a young Ciro Ferrara. Apart from those two, there weren't really any notable big names.
Also, the entire squad was Italian apart from Maradona.

Your comparisons and those of your friend who wish to soil the memory of Maradona, well, those comparisons are disgusting and typically English. The pure hatred of the Argentinian. Why does the Englander feel like this?

It's still Fenwick's o.g for me!!
But yeah, the build up was pretty *special/magical/superhuman/unreal/impossible!

SausageVince said:
This is complete bullshit.
There was Fernando Di Napoli and a young Ciro Ferrara. Apart from those two, there weren't really any notable big names.
Also, the entire squad was Italian apart from Maradona.

Your comparisons and those of your friend who wish to soil the memory of Maradona, well, those comparisons are disgusting and typically English. The pure hatred of the Argentinian. Why does the Englander feel like this?
Click to expand...

Soil his memory how?

I fucking love Diego Maradona and have him in my top 3. Higher than any Englishman.

SchmoodSpur said:
This isn't the place for that debate. It's not even a debate really. Messi is quite obviously better.

Even Diego himself said it.

He had Diego Maradona as his manager at a WC for god sake. As fun as it was seeing him belly dive in the pissing rain when they qualified. His tactics were quite mad.
Click to expand...

Well Messi has said Maradona is better so quoting that doesn’t get us anywhere.

Jenny Talia said:
Well Messi has said Maradona is better so quoting that doesn’t get us anywhere.
Click to expand...

Asking an Argentinian to be impartial on Maradona. 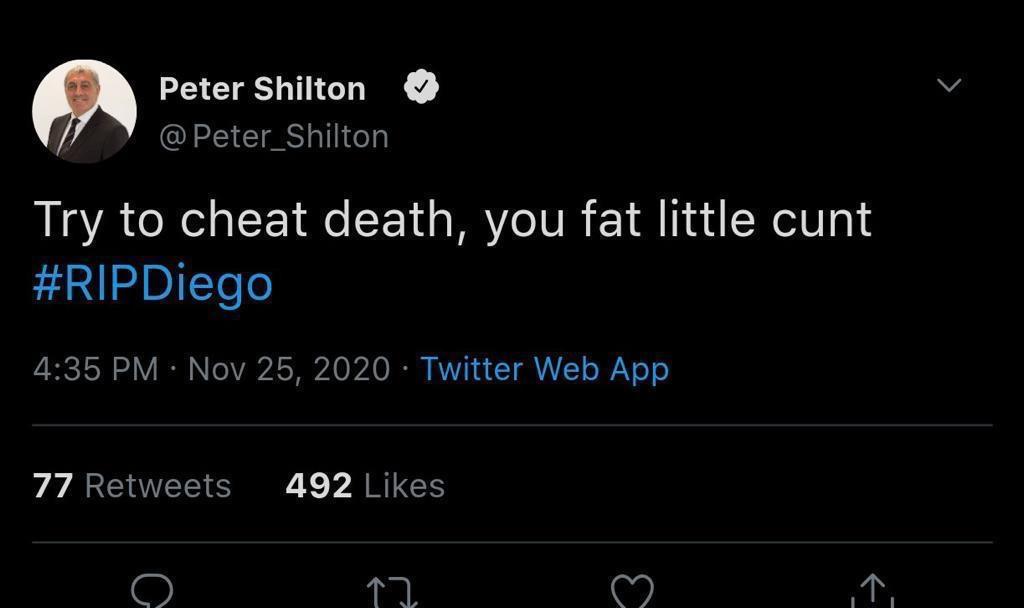 If only it was real huh.
Click to expand...

I know I shouldn't, and I know it's not real etc... but that is fucking hilarious... and the humour is so English!

I can't even think WHICH English footballers' death would generate a 3 day mourning period... Gazza? Beckham? maybe Kane one day...? Even Bobby Moore only got a minutes' silence.... I genuinely can't think of one...
Maybe that's the difference between us, and South American Football! We just don't hold our players in SUCH ridiculously high esteem... we just build them up to knock them down... Fuck, Maradona did all the 'knocking down' for himself, it was totally self-inflicted, the Argentinian people didn't have to lift a finger.... and yet they STILL loved him!

SchmoodSpur said:
Soil his memory how?

I fucking love Diego Maradona and have him in my top 3. Higher than any Englishman.