I disagree with the argument about a plain white shirt being too plain. Sorry, but thats our kit.

The key for these so called designers should be to make a nice fit, and a high quality material. Badge, logo, and sponser, and maybe some piping. Some of these kits are as if you gave a child a felt tip.

You dont put huge flashes or bands across a shirt just because you think that makes it a design....go and work for H&M kids department then.

Its like our shorts this season....apparently navy blue is way too simple. Navy blue with white piping? Nah. Lets put curving white nappy straps over the arse...Loooooovely.

I dont see Liverpool fans asking for white sleeves, or huge white patches down the side.

Luda said:
That looks more like a gym shirt with the badges photoshopped on. I think the sleeves look a bit baggy for a "soccer" jersey.
Click to expand...

I like design. My point was about the cut/fit. It looks more like a tshirt than a "performance" piece of kit.


sammyspurs said:
Some of these kits are as if you gave a child a felt tip.
Click to expand...

Or photoshop. Some of them are truly appalling and it's discouraging to read some people think they're leaks of the actual kit.

That one on the previous page: Spurs would never allow the crest to go in a white circle when we have a white version available.

I'm surprised that the shirt with the blue chest band and white badge is one people are still talking about. Despite the giveaway of the fighting cock url at the bottom, it's one Sibs mocked up based on the templates Under Armour had available. Which is why it looks "terrible"--he was testing out some ideas.

The only leak of the Spurs shirt I'll believe is the leak I see on the Football Shirts blog. Everything until then is just people fooling around with photoshop--maybe nowhere near as eager to deceive as they end up being considered. (Sibs's design was never meant to fool people into thinking it was a leak. It was from the start a conceptual exercise. Down the tubes, someone decided it was a leak, and now we're seeing it on the same forum that birthed it, presented as what next year's shirt will look like, instead of something resembling what the shirt could, potentially, sort of look like.

Oh for fucks sake, I know I'm an insensitive bastard but really they died nearly a quarter of a century ago - move on, don't dwell on things......it'll kill you as well if you do

The thing is the memorial symbol has only been moved to a different part of the shirt, yet the club is supposed to consult the families? I am pretty supportive of the JFT96 thing but they should know how to pick their battles.

Still, if it had happened at Spurs and my dad or brother died, and the club badge had incorporated a tribute since then, I'm sure I wouldn't exactly be happy if it was dropped altogether with no club statement. But I wouldn't expect it to go on forever and wouldn't expect to be consulted, tbh, just that the club came out with a statement addressing it respectfully. I think it's pretty good that, now the time has come and the badge will no longer include the tribute, the tribute will still be on the shirt after all, anyway.

Anyone got any gossip on who are new sponsors are going to be, or whether we are going to renew are current ones.

Oh for fucks sake, I know I'm an insensitive bastard but really they died nearly a quarter of a century ago - move on, don't dwell on things......it'll kill you as well if you do
Click to expand...

The new kit even has "96"with the two justice flames embroided at the back....whats the issue??

They just love to be victims don't they.


Ben said:
They just love to be victims don't they.
Click to expand...

It must be hard forever thinking your the biggest club around and being shown your not, over and over again. "The Victim" is the only card they have to play these days

under armour are our kit sponsor next season,

also dawson has signed a personal sponsorship with UA,

Oh, I know they're the sponsor, I just meant they should try again with the kit. Not a fan personal

Just not Spurs. We don't wear a flipping sash. 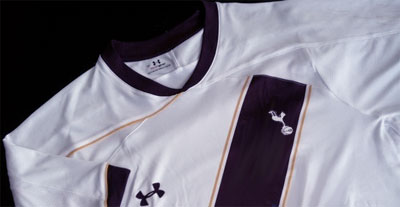 How fucking hard is it to get a plain white shirt with minimalistic navy-blue trimming. Bring back Adidas and Holsten.

I just stick to training shirts now. Like the darker navy one Jamie Gascoigne wears... No fuck off logo on the front and it doesn't go out of date as quickly either.

The away ones are the ones to go eccentric on. Pink and purple spots with Benny's face all over it and I will happily hand over more lazy-earned dosh to the plc.