Tottenham Hotspur FC will look to confirm their place in the UEFA Europa League round of 32 as they take on Panathinaikos FC, the only side that can deny them a top-two finish in Group J.

Previous meetings
• The sides drew 1-1 when they met for the first time on matchday two. Michael Dawson headed the English team ahead in a first half characterised by a slow tempo, but Spurs paid for a lapse of concentration as Toché levelled with 13 minutes remaining.

• Spurs' five games against Greek clubs have ended W1 D2 L2 (W1 D0 L1 at home – W0 D2 L1 in Greece). They met PAOK FC in last season's group stage, drawing 0-0 in Salonika and losing 2-1 in London. They have not won in four matches against Greek opposition.
• Panathinaikos's record in 17 games against English teams is W1 D6 L10 (W1 D4 L4 in Athens – W0 D2 L6 in England). That lone victory came against Spurs' north London rivals Woolwich FC in the UEFA Champions League group stage on 26 September 2001.
• Panathinaikos ended a run of three straight defeats in London (all against Woolwich) when they drew 1-1 with the Gunners in their most recent visit to England, in the 2004/05 UEFA Champions League group stage.

Match background
• Spurs are unbeaten in their last six European games, but that last defeat came against another Greek side – 2-1 against PAOK last season.
• Panathinaikos have lost their four most recent UEFA Europa League away games –the last three by the same 3-0 scoreline – without scoring.
• This is Panathinaikos's fourth UEFA Cup and UEFA Europa League group stage campaign, and they have successfully reached the knockout phase of the competition in all of their previous efforts.
• Spurs are returning to the group stage of this competition for a fifth time. Including their 2010/11 UEFA Champions League campaign, they have reached the knockout phase in four of their five previous UEFA group stage attempts, missing the cut for the first time in last term's UEFA Europa League.

Team facts
• This is Spurs' 100th UEFA Cup and UEFA Europa League game; their previous 99 ended W56 D26 L17.
• Spurs and FC Twente have been the group stage's draw specialists, with four ties each from their five games. The Dutch side, however, are already certain to miss out on a place in the round of 32.
• Hélder Postiga played for both clubs: he represented Spurs in 2003/04 and then spent half a season on loan at Panathinaikos in 2008. 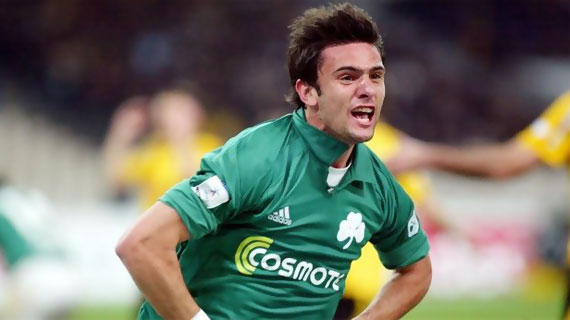 • Panathinaikos's Ghana winger Quincy Owusu-Abeyie had a trial at Tottenham in January 2009. (I didnt know that!) He started his career at Woolwich, and also played for Birmingham City FC, Cardiff City FC and Portsmouth FC during his time in England.
• Other Greens players with Premier League experience include Jean-Alain Boumsong (Newcastle United FC) and Sebastián Leto (Liverpool FC).
• Panathinaikos defender José Manuel Velázquez and Tottenham attacking midfielder Iago Falqué spent a season together in the Villarreal CF B team in 2010/11.
• Tottenham manager André Villas-Boas :avblol: received his first break in coaching as a teenager from then Porto boss Sir Bobby Robson, and later assisted José Mourinho at Porto, Chelsea FC and FC Internazionale Milano, before striking out alone at A. Académica de Coimbra and then leading Porto to a domestic double and the UEFA Cup in 2010/11 :avbscream: . A move to Chelsea :avbfacepalm: that summer proved to be ill-fated, but he took charge at Spurs in July 2012.

• André Pinto was on the books at Porto during Villas-Boas's spell in charge, though he spent that season on loan with Portimonense SC.
• Panathinaikos parted company with coach Jesualdo Ferreira after matchday four, with the Under-20 coaching team of Ioannis Vanortas and Juan Ramón Rocha taking charge for the remainder of the season. A midfielder for the club from 1979-89, Rocha was Panathinaikos coach from 1994-96, leading the Greens to the 1995/96 UEFA Champions League semi-finals :baeshock: , and was briefly caretaker boss again in 1999.

awesome OP but there is already a thread!

Thelonious said:
awesome OP but there is already a thread! it's kind of a match thread, I can update the OP with your stuff, because it's 1882, it's better to keep the focus on 1 thread, however, as Arty has said, it did us no harm against Fulham
Comment

I'll keep this one open but I'll update the other OP with your shizzle.
Comment

Team guesses anyone?
I'm really struggling to predict what lineup AVB will go with for this one...
Comment