This time next year rodders we'll be championship

club can go to hell

I don't really get the overly negative reaction on here.

It's pretty obvious that we're going for a two-tiered managerial system with Paratici as General Manager and Fonseca as head coach. It's clearly Paratici who's on the phone to Kane convincing him to stick around. This is the guy who convinced Ronaldo to quit Madrid and brought Juventus back from Serie B to 7 consecutive titles...he's no mug.

If he's handpicked Fonsenca it's probably because he's a pretty good football coach. He's probably one of the few who are happy to just get on with the work on the training ground and not bother with agents/ transfers all that bollocks. Both Shakhtar and Roma consistently sold their best players, I don't think football is ever as simple "Roma finished 7th so he must be shit".

Personally, I'm happy we've got Paratici's man and are putting some structure in place. I would much rather that than some egomaniac like Conte running around the gaff demanding 100's of millions and mouthing off to the press.

Hey guys. You have to be calm, Paulo Fonseca is a fucking great manager, you’ll love him. His style of play is just incredible and when he found better players, even better. Pep Guardiola already talk about it in a very positive way.

He was my choice to replace my club manager (Jorge Jesus) but never happened. His last years in Rome were difficult (changes in their board, some icons like de Rossi left, there isn’t investment, has to play with a lot of youngsters...) but in Shakhtar he left a legacy with an amazing offensive style.

There is a thing that will happen for sure: you will play way better with an offensive style very similar to Guardiola.

Just look at these videos:

AlabamaSpur said:
Why don't y'all take this cunt off to private messages?
Click to expand...

Honestly, if we'd hired Paratici before the season ended, held a press conference with him and Levy making clear that Levy was stepping back from the day-to-day of transfer bullshit and handling the reins to Paratici to build an attacking, possession-based squad to link up with our academy and our club's culture and DNA, and that the resources made available by our new stadium would be brought to bear in that effort, and then Paratici had gone out and hired Fonseca during the week after the season ended, I would be excited about the new direction and talking myself into Fonseca who does at the very least fit the brief.

We've done the exact opposite of all of that, in terms of giving us as fans reasons to give anyone the benefit of the doubt in any of this.

Let's be clear here, I don't think any of us want Fonseca to fail. Not his fault Levy is a cheap bald snakey cunt. I just think, understandably, most of us have a hell of a lot of doubts.

I would LOVE to see him do well, get rid of the deadwood, and have us playing exciting football (and winning!). But I won't be holding my breath.

My criticism/anger is 100% for Levy and Enic right now.

Bye Kane. Bye Sonny and who could blame them with us appointing a Championship level Manager

Hercules has just called this. 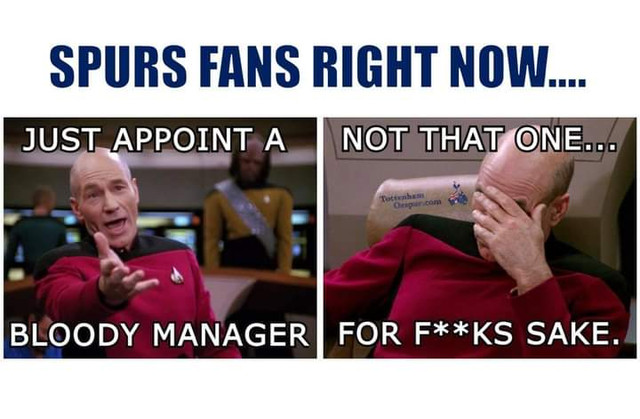 I'm laughing at all these bandwagon jumping cunts who'd never heard of this guy before yesterday....but now know that he's shite and will never do it here...

There was someone laughing at the fact that "wait and see" is leading the poll....Wait and see is the response when someone sensible see's a manager he's never fucking heard off and would like to wait and see, as it were, how the cunt is going to turn out...

The evidence is there for all to see on the Pochettino thread...

Fonseca not my first choice. Thats the first thing I want to say...

But then, I have seen so many nonsense things said about him & his records...
So, want to do some mythbusters or atleast give some context...

Roma sacked Fonseca : Not Correct. He signed a 2 year deal in 19/20. Roma had a change of Ownership in 20/21. Both sides didn't want to renew. New owners wanted to look at other options-they ended with Jose

Spurs & Roma finished 7th, so he is poor : Spurs finished 7th inspite of largely fitter squad, inlcuding Kane who wasn't injured + inspite of Kane & Son's incredible form. In short Spurs best players were fit, available and in form. On other hand, Roma lost their biggest star Zaniolo to ACL before the season...and he did not play 1 minute of football in 20/21 + they had lot number of injuries post Feb 2021....So, Spurs finishing 7th (lucky to have finished 7th) is incredibly poor and Roma reaching EL semis & 7th with such a bad hand isnt that bad.

Ole's United destroyed Roma : More like Ole got lucky on the day. Roma went into the game with injury issues. Then they took the lead 2-1 at 33min. But by 37 min, they had lost incredibly 3 players including their first choice GK and their CM and LWB. 2nd half thanks to 2 keeper errors and a dodgy penalty and tiring players, United won the game. For what its worth, Roma won the 2nd leg. May be on another day, Roma could have held on or won - they were simply unlucky

Zorro Mask : Many are making a big deal out of this. Shakhtar were in a touch group with City,Napoli,Feynoord. Zorro mask was more of a joke from his manager colleague who wanted PF to wear the costume,if he could stop City's 29 game unbeaten run and get them into CL knockouts. He did that convincingly...ended up scoring 12pts from that group. It was a bit of fun but I have seen some not having the heart to take this as a joke.

Bad at Roma :
We got to understand how difficult the circumstance was for Fonseca at Roma.
Pre 2019/20 - Monchi was the DoF. But he had a torrid time at Roma. He sold big players like Salah, Allisson etc for 230m+ and reinvested 200m+. Almost every one from that list were flops or didnt do enough. Even now, in Roma squad carries some of those deadwoods.
19/20-Fonseca was put in charge...of a club which was in financial trouble.
Constant fights between new DoF and the then owner is public knowledge.
Inspite of these off field issues, Fonseca got them playing good football - used the deadwoods and loans like Smalling to good effect. Roma finished with commendable 70pts in league finishing the season in strong form including a away win at Juve 1-3.
20/21 - Owner sold the club and new US owner came. He got some backing. But a Zaniolo 2nd ACL injury meant he was out of season without playing 1 minute. Roma were 3rd in March21. But injuries to Vertout, their LWB and few completely took the life out of the side. But they did play well to reach EL Semis...which Roma fans didnt even dream of start of season...


Just looking at league table doesnt give the full picture. Look at the context. He has done as well as any manager could under the situation.

So, lets see if/when he comes, lets back him and hopefully he can deliver...especially if Kane stays

Wellsey said:
I'm wondering if we'd have been better sticking with Jose for a bit longer?
Click to expand...

Bloody hell no. The main positive in Fonseca is that he isn't Jose Mourinho.

Whatever thoughts anyone has on Levy / Enic, at least give this guy a chance. We were only a couple of wins away from Champs league last year. We were all crying out for more attacking flair. If he can shift a few and bring in a CM + couple of defenders I think he'll do alright.

All I ask for is a team that puts in the effort, plays with heart, passion, flair, at pace with a never say die attitude. If we lose playing that way then fair enough.

I‘m sorry but if we appoint this man then I will have no words. We sacked Mourinho only to replace him with the man who was sacked and replaced by Mourinho?

Supporter
We've officially reached Wet Spam levels of banter club if this is true. Fuck me.

Whoever it is, I hope we follow Paratici's lead on this one. If he thinks Fonseca is best for the job and he can make a good case for that, then give the guy a run at it. If he thinks it's Lopetegui or Ten Hag and a deal is within reason, then get it done. Just a consistent direction instigated by somebody with a clue, please and thanks.

Igula said:
Yes I am a Spurs fan does that mean I have to ignore reality and just fan boi a manager because we signed him?

What a stupid way to act.
Click to expand...

Not really fair to not give Fonseca a chance though is it. It doesn’t make you a fan boi you fucking idiot.

It’s Levy you should direct your ire at. Get behind whoever our new manager is and shut the fuck up.

He may or may not work out. I’m not particularly hopeful but I’ll back him to start with.

Embarrassing by Levy - fuck off you bald fraud cunt! 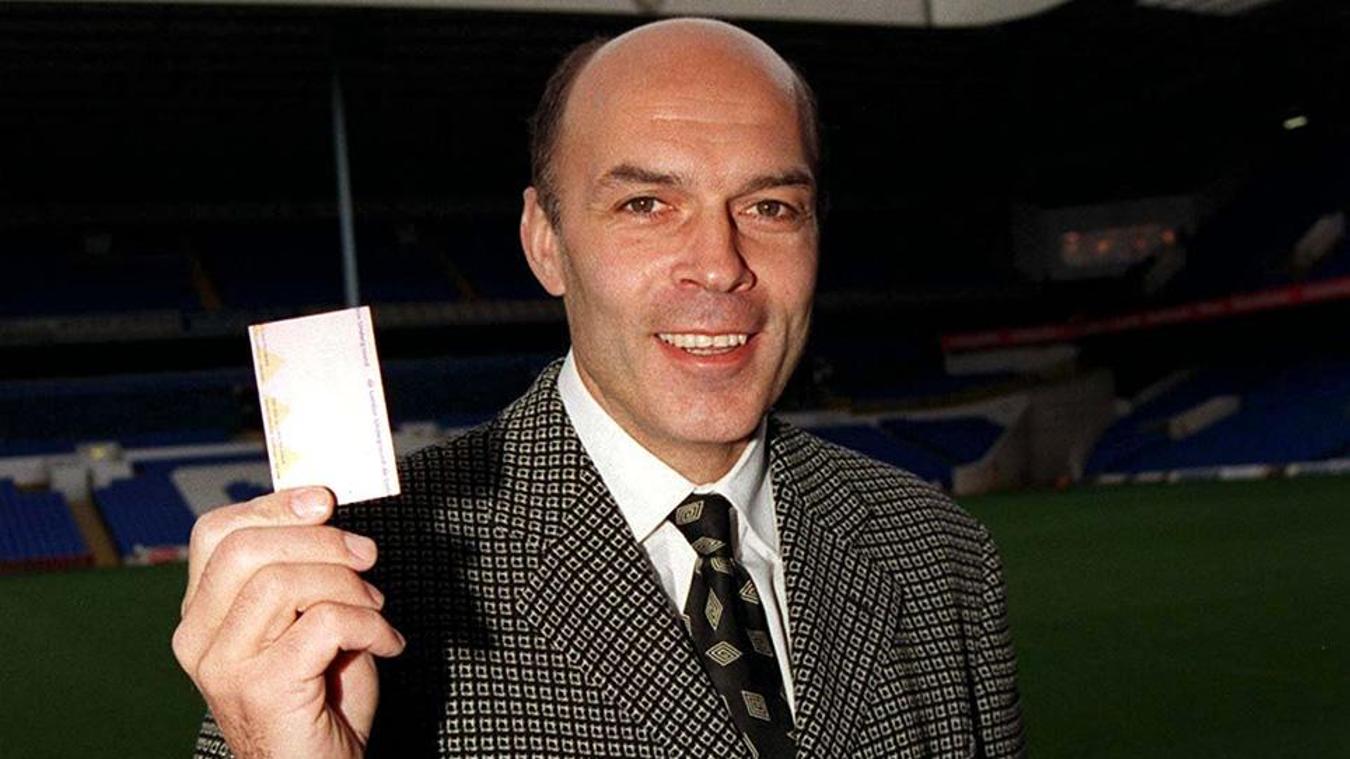 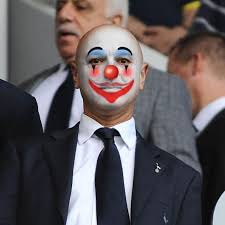