We need to get a back up for him in as soon as possible. January would be ideal. He is a warrior but I worry that he will end up crocked like Wanyama and Sandro just because we don't have a genuine option for him.

We now need someone to back him up, or wait for Skipp to return from loan ?

And they said he wouldn't work as a DM...

Can we send winks/sissoko out on loan in January and re-call skipp to play Europa league/cup matches?

Hojberg needs to be protected.

Stopspot said:
We need to get a back up for him in as soon as possible. January would be ideal. He is a warrior but I worry that he will end up crocked like Wanyama and Sandro just because we don't have a genuine option for him.
Click to expand...

We need to go get Romeu from Southampton

Tottenham till I die

Maybe Real Madrid fancy sending us Casemiro since Bale and Reguilon were clearly not a priority?

Edit: While this is/was as a joke, as of January he's able to negotiate leaving on a free for next season.

We now need someone to back him up, or wait for Skipp to return from loan ?
Click to expand...

My preference would be Skipp to be able to shadow him.

In training, in the mess with Levy and Danny, taking a shit. Everywhere.

Remember how many on here didn't fancy this signing?

BuT He'S NoT a ReAl DMMMM

Mrs Perryman said:
My expectations weren't high (influenced by Matt LeTissier!), first game wasn't impressed, but boy, has he turned it around quickly! He has become one of the first names on the team sheet, alongside H, Sonny and Hugo.
Keep it up Pierre, you may be the missing link.
Click to expand...

It was not difficult to be misguided about him in the first few outings.

In the preseason games, he was playing along with Winks, and playing further upfield than Winks, he was not occupying the DM role as he is now!

Quite a few weren’t sure after those games but when he was with Winks, he wasn’t showing his abilities as a DM which he is so good at.

Don't know why but I always imagine this guy being on a leash in the dressing room waiting for the kick off and someone having to let him loose on the opposition. I love his tenacity, we've badly missed someone with his bite and it's great to see the way he puts himsef about. A warrior and in some games they are the players who get you through.

(Visions of us playing Barcelona and Jose giving PEH an old boot of Messi's so he can 'get the scent')
Last edited: 3 Nov 2020

H4SPURS said:
We need to go get Romeu from Southampton
Click to expand...

He's 29. He's a very good and very underrated midfielder (imo) but too old for us to realistically want him. I had mentioned him as a possible target a couple years back but I think we we're aiming higher than him at the time.

VonnegutBusy said:
Remember how many on here didn't fancy this signing?

BuT He'S NoT a ReAl DMMMM
Click to expand...

Rather some 10 year old from weaker leagues because the stats are better.

PEH has been absolutely fantastic

VonnegutBusy said:
Remember how many on here didn't fancy this signing?

BuT He'S NoT a ReAl DMMMM
Click to expand...

I have faith that Doherty would turn things around like PEH as well.. just needs to get used to the playing style

I’ll be the first to admit I got it wrong about Hojbjerg. First few games as others have said he looked very iffy but since he’s moved back into the anchor role he’s looked absolutely brilliant.
As others have said though, he must be protected at all costs. Skipp is an incredibly similar player to him and should most certainly be recalled in January to back him up.

Been a revelation so far. Quite a few on here didn't fancy him either, 'not a real DM' apparently.

Son is too mercurial
Kane has peaked, should be sold
Aurier is our worst ever RB

Fun of it is it is a game of opinions.

Good on him, proving me wrong in being so disciplined.

I wonder though, as I still think we need CM help, if people want DM competition for him since I don't think that is his best position.

If we could get a player like Ndidi, would people want a midfield of

Or do people feel that when healthy, we have enough umph in

I for one feel PEH is best in a free role where he can hassle the players up the pitch more and be a leader of a press, but that also doesn't seem to be our style of game

I think that if we had a player like Ndidi my preferred MF would be Ndombele-Ndidi-Lo Celso, but ultimately the good thing is with those 4 players I think you could play any combination of the 3 of them and feel good about your MF.

The issue I see with a Ndidi-PEH-? MF is that it is very reliant on Ndombele/Lo Celso to the majority of the passing, especially against a team that presses as PEH struggles against the press and not sure Ndidi (or a similar player) is likely to be much better. I think it means that the Ndombele/Lo Celso role is then forced to play too deep, like we currently see.

I think with PEH, even though he may not play a traditional DM role and you are right is likely better in a role that allows him more flexibility to move up the pitch to press, is going to be the "DM" in any MF we play. 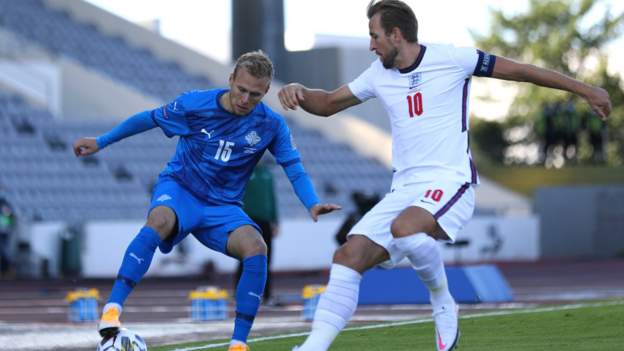 England's Nations League match against Iceland is in doubt because of the UK government's new travel restrictions on visitors to Denmark.

Under the new rules, UK citizens and visa holders can return from Denmark - but will have to isolate along with all members of their household for 14 days.

That means Danish Premier League stars may also have to isolate for 14 days upon their return if they travel to the country for international duty. That would affect Leicester goalkeeper Kasper Schmeichel, Everton's keeper Jonas Lossl, Chelsea defender Andreas Christensen, Southampton centre-back Jannik Vestergaard and Tottenham midfielder Pierre-Emile Hojbjerg, who are all in the squad.

It could also affect Sweden's British-based players who are set to play Denmark in a friendly on Wednesday including Manchester United defender Victor Lindelof, Newcastle full-back Emile Krafth and Everton goalkeeper Robin Olsen.

World governing body Fifa's rules, issued at the start of the pandemic, allow clubs to withdraw players from international duty if there is a risk of coronavirus infection.

The club has to block him leaving, it’s as simple as that.