Our former youth goalie Oscar Jansson (2007-2012 in our youth ranks and out on loan). Is nominated for goalkeeper of the season in the Swedish top flight. Having had a career high season between the sticks for Örebro.

Not so much a youth anymore at 29 but I found no better thread for this.

Was highly rated before his car crash. Nice to see him score and help Crawley through to the next round of the FA Cup.

Maksim Paskotši is a member of the Estonian A-team for the first time. The central defender, who is scoring goals every day in Tottenham Hotspur, admitted that the invitation was very unexpected for him and he realizes that under normal circumstances it probably wouldn't have come yet.

Paskocsi, who grew up in Lasnamäe, Tallinn, can become the owner of one record in the Estonian football team during the March window. So far, Mattias Käit, who was 18 years old, 3 months and 8 days old, scored against Gibraltar in October 2016, has scored as the youngest team member in the qualifying game. If Pascoch, who had been hit hard in the English youth league, had to find a goal net in a match in March, he would have hit the top mark from Käid about a month younger.

The former captain of the U17 team, who joined the A-team for the first time, replaces Markkus Seppik in the team. "It was very unexpected, but I can't say I wasn't ready for it. It's a very big dream come true. Given the situation in the world right now, I can say I'm lucky. I'm not happy that others were hit with Corona but it was good for me, " he tells Soccernet.ee.

Pascoch, who was a member of FC Flora's representative team until last summer, did not go to the Premium League, but he could smell that level in the cup games. He is very grateful to his teammates for the days of Flora and named Konstantin Vassiljev, who is experienced and can be included in the team.

"When I got to Flora, there was no attitude that 'who this young boy is, we won't talk to him.' All the players helped me a lot and so did Kostya. His experience and leadership skills definitely helped me become the player I am now. He did a lot for me, it's hard to point out anything specific, but he insisted that when I am young, I have to work hard and my time will come. I must not think I am a superstar. He taught me to behave. . "

As the current Spurs player, the environmental change for the defender moving from Flora to England was not even as great as might be expected. "There are small nuances where the clubs are different, but overall I can't say that Floras has been a bad workload. Tottenham just has very experienced coaches and their work is a bit on a different level. In Tottenham, coaches can give examples of their careers. Every step emphasizes how important something is. "

On a daily basis, Pascoch lives with a local family in London, for whom the club pays. He doesn't have to go to school because: "School takes place in my room! I do everything online . On Mondays and Thursdays there are trainings later and I study in the morning. Every other day I do school work in my free time."

Paskoch adds that he is principled and takes school work seriously. "If I start something before a workout, I definitely want to finish it so that it doesn't stick in my head."

Pascoch has merged with Tottenham's U18 team in an exemplary manner. In the league of his own age, he has scored five goals in 14 games, which is an impressive balance for the central defender. Although the young boy from Tallinn has not spoken to Jose Mourinho, the well-known head coach of the representative team, he thinks that the Portuguese probably still knows him. "If you do a lot of work and play well, it's not possible that they (RV coaches) won't notice you," he says.

Pascoch's opinion is also confirmed by the facts, because two young men in the U18 age group are already training stably with the representative team and have even been invited to the games. "Some people train at the mission during the team break. If someone is needed to attack or defend there one day, they will be brought from us. Unfortunately, I haven't been invited yet, but I'm working hard for that."

In Tottenham, Mourinho is not doing best, as he lost 0: 3 to Zagreb Dynamo in the European League on Thursday and was eliminated from the competition. In the home league, you will find yourself in the sixth row of the table. Pascoch confirms that they are not directly affected by the work of the representative team. "We have our league and we think about our results. We have hard training and we continue to work!"

And Pascoch's work ethic is beyond doubt, at least in words. The midfielder is already thinking about next season, where he plans to be a Tottenham U23 player. This is the same level where the front goalkeeper of the Estonian team Karl Jakob Hein Woolwich is currently playing: "I will do my best to be a U23 player and, if possible, train with the representative team."

What does it mean to Pascoch that he "does everything"? "I'm trying to work harder than others. I'm really doing my best and I'm doing something extra. I'm very happy I haven't had any major injuries. I can't say I wasn't injured at all, but they didn't bother me."

Dane Scarlett in 2nd place in u18's
Click to expand...

I remember feeling a bit despondent about 3 seasons ago when striker Reo Griffiths (Eu17) and a high scorer at youth levels decided to move to Lyon at aged about 17 or 18, given we've had very few decent striking prospects in recent years - probably Jon Obika or Shaq Coulthirst being the best of them.

But we now seem to have 4 decent prospects in Kion Etete (the oldest at age 19) who's got a decent goal and assist record in u23's this season, Troy Parrott (just 19) who has struggled to score on loans this season but a full Republic of Ireland international, whilst E u17 Dane Scarlett has been knocking them in for Spurs u18's after a decent pre-season with first team and 3 first team appearances (one goal), this season, whilst E u16 Jamie Donley had a good pre-season with u18's in Scarlett's absence, has had a few appearances and goals for u18's but seemed to step up a notch with 2 goals and an assist in his 45 minutes in the FA Youth Cup match v Wimbledon.

Might we get Harry Kane's successor (or even more than one) from the Spurs youth ranks ? We can but wait and hope ! 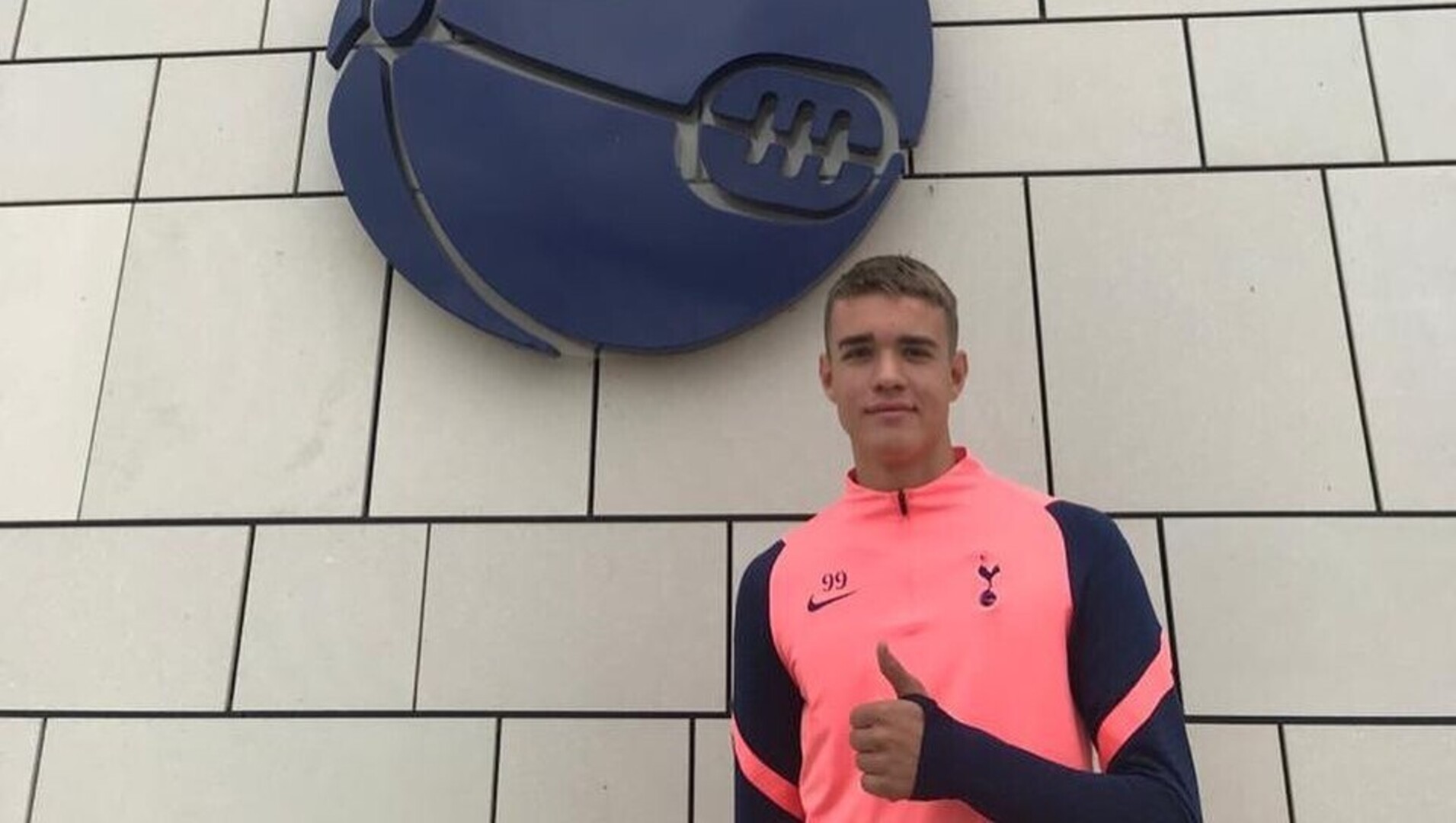 another estonian CB on trial at Spurs, the name is Erko Jonne Tõugjas and he is 17 year old. Has represented Estonia U-17 11 times so far. Can't say I know anything about him, except that he plays for 2nd tier club owned by former fartsenal GK Poom. They seem to have a good academy, just last week one 16 year old signed for Inter

ElTel said:
They have always taken it seriously but if a young player wants to leave what can the club do. This lad is doing well at PSV but other highly rated departures like Reo Griffiths who left to Lyon hasn't done much and I see Keenan Bennetts is on loan at Ipswich after struggling in Germany
Click to expand...

If we persist with what we have done in last 6 years we would have no club trained players = problem to get a full squad in european tournaments.

If we produce a decent set of club treained players we dont need to buy squad players and we do not need to buy other HG players.

I see The Grauniad has highlighted Alfie Devine as the one to watch from the Spurs yootdem in their yearly Next Generation article... 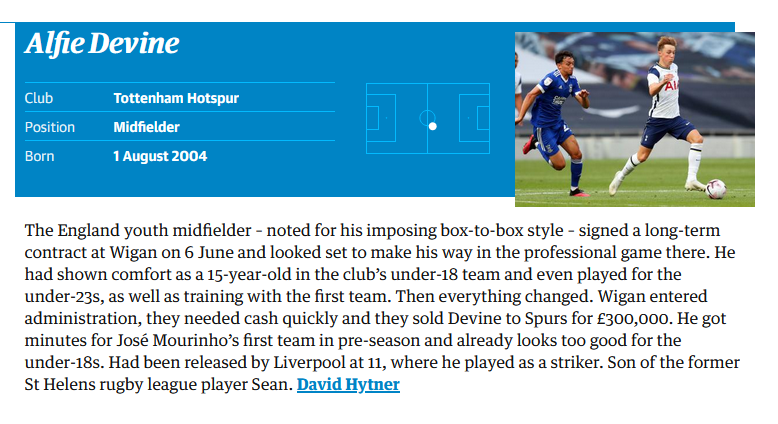 Next Generation 2020: 20 of the best talents at Premier League clubs

That said, he's not a TrueDefensiveMidfielder™ so he can do one as far as I'm concerned
Last edited: 7 Oct 2020

Good luck to him, although suspect this is his level.

Also will allow Etete much needed playing time in u23's, which has been largely taken so far by Sterling playing as striker

Incredibly bad luck, only just back from a season long injury

Cravenspurs said:
Happens to all clubs, but sucks to see one we had get away. Exciting to see his path
Click to expand...

Last 3 or 4 years Spurs lost players as no youngsters getting through to first team, no confidence vote from youngsters in Poch policy.

All downhill from there for bringing players through - other than Winks. We are now struggling to field enough HG players (see Squad thread post today) as a direct result

New contract for Harvey White, until 2024. Happy for him. Haven't seen a huge amount of him but what I have he looks very promising, great weight of pass over medium and long range and obviously great set pieces. Hopefully he gets a good loan next season.
You must log in or register to reply here.
Share:
Facebook Twitter Reddit WhatsApp Email Share Link
Top Bottom