Allejo10 said:
We've been shite this half, there's no more than 4 good players in this team and two of them are 16 years old.
Click to expand...

We have 16 year olds playing against Ex-England players. Bit of perspective might be in order.

KaneIsAble said:
Burnnett is a twat. So much fucking shouting. Yap yap yap. Let the boys think and read the game a little.
Click to expand...

My thoughts too - the worst was after Okedina gave away a pen, was head in hands, and Burnett was on and on at him about how to make a tackle, like the kid hadn't just learnt a hard lesson. I really hate this micro-management style.

I just posted a bit about Skipp in his thread - he's showing as the 10th best U21 player for "distribution" in Europe's top 30 leagues.

Interesting that Noni Madueke is 1st for shooting and 7th for shot creation of U21's in Europe's top 30 leagues.

Data is more than ever a must when it comes to scouting. The CIES Football Observatory has developed a unique methodology to assess the performance of players on an objective basis. Using the data from InStat, issue number 317 of the Weekly Post presents the 10 best performing footballers born in the 2000s for each of the six areas of the game covered in our approach. Only players fielded for at least 450 domestic league minutes up until December 7th are included in the rankings.

Nathan Collins (Stoke City) stands out when it comes to rigour (duels). He should soon receive his first call for the Irish senior national team. At the top for recovery, Mohamed Camara (RB Salzburg) is following on the footsteps of other top footballers trained in the academies ran according to the precepts of the French maestro Jean-Marc Guillou. Born in 2002, Ryan Gravenberch (Ajax) heads the distribution table, while Khvicha Kvaratskhelia (Rubin Kazan) has the top score for take on.
Dominik Szoboszlai (RB Salzburg) and the 2002-born striker Noni Madueke (PSV Eindhoven) are at the top for chance creation and, respectively, shooting. The 60th edition of the CIES Football Observatory Monthly Report details the basic principles of the statistical approach developed and presents the top 10 overall rankings in the different areas of the game taken into account for each of the 35 leagues examined. 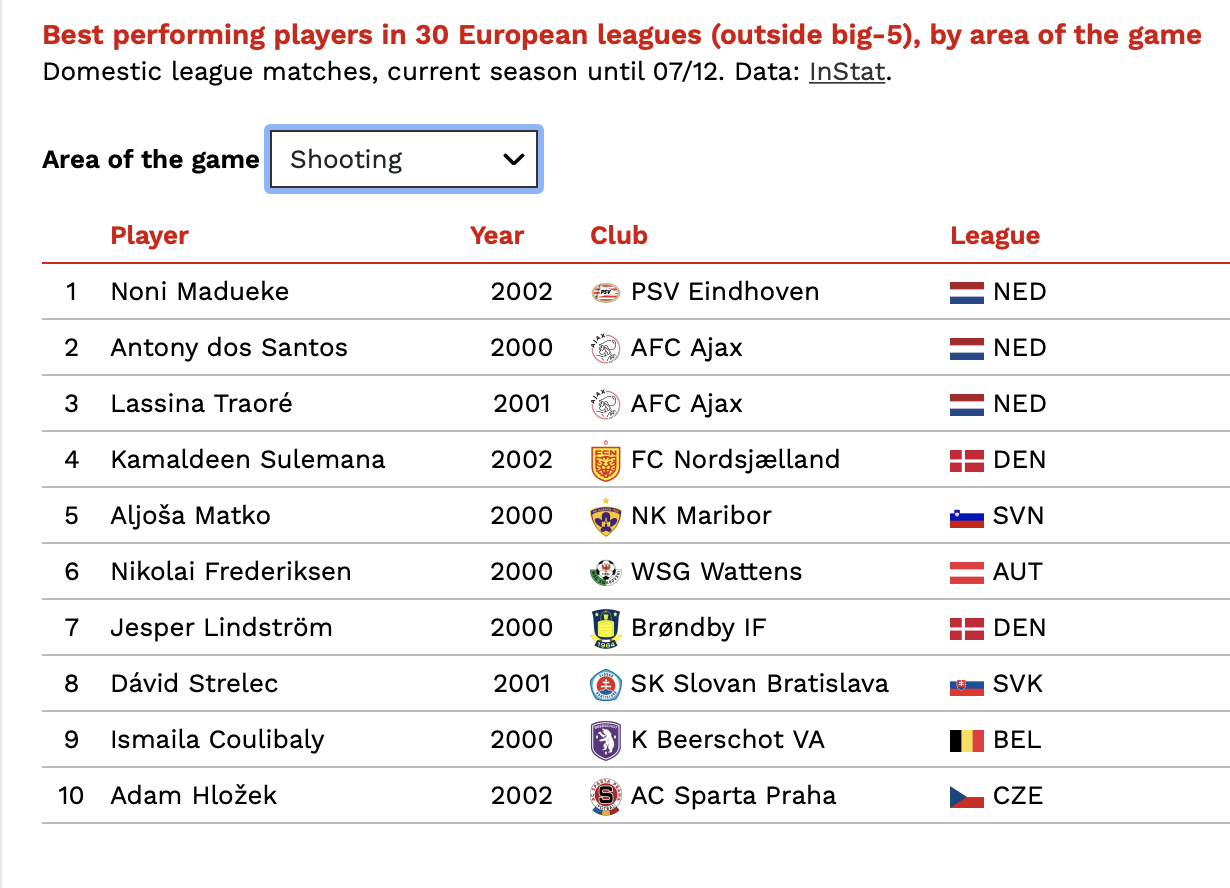 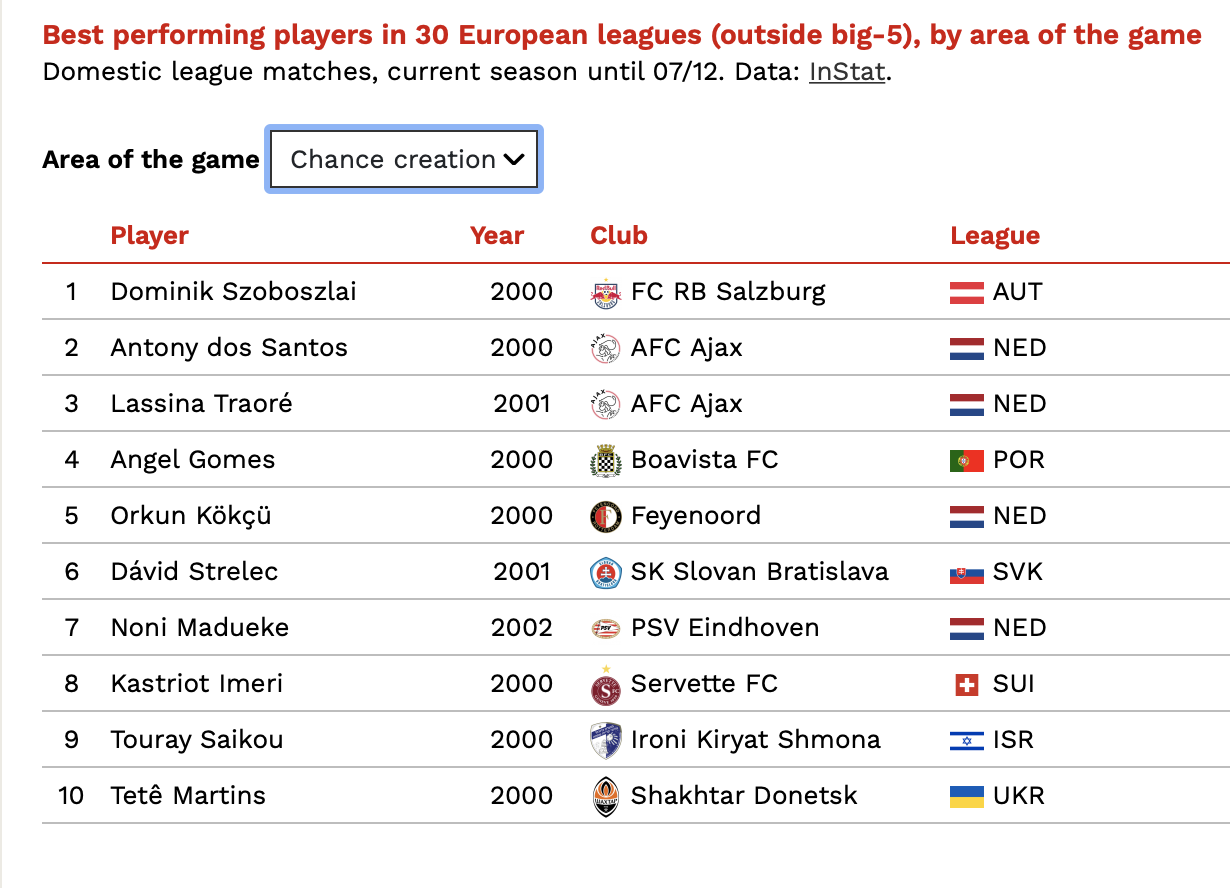 A match last year when he was playing for Stevenage

I understand the midfield player is both a Spurs u16 this season and played for E u16's a few days ago in a friendly
Last edited: 24 Dec 2020


A match last year when he was playing for Stevenage

I understand the midfield player is both a Spurs u16 this season and played for E u16's a few days ago in a friendly
Click to expand...

Worth commenting that our u16 squad is now starting to look very, good, with a lot of players capped at England u15 or E u16 :

At this age other kids put on a spurt either physically or mentally so can join the above level of player and equally some will drop off, but Spurs u16's starting with 7 players capped at that level makes this a good solid intake year likely to do well in Academy u18's next season.
Last edited: 25 Dec 2020

Another pointer to how highly White is regarded

great finishes for his 3rd and 5th goals


Probably half the team enthusiastically on social media !
Click to expand...

This kind of shit is so essential to building a club identity and a sense of belonging. A million Ndombeles and KDBs isn't the same as one Harry Kane in that regard.

Skipp and White both scoring tonight.

That's the best Spurs performance of the year.

Still a bit pissed off that Poch's 'train but don't play' and general no route to first team made us lose a few players out of Spurs academy - the obvious example being Spurs u16 captain Noni Mandueke who didn't sign an academy scholarship and moved to PSV.

He's now 18 and has scored 9 goals and 8 assists (17 involvements in goals) in 1040 minutes (ie involved in a goal every circa 60 minutes) despite only 5 of his 17 league appearances being starts, suggesting his manager is still using him carefully. Probably a certain starter next season.

Rumours that if someone buys Jaden Sancho from Dortmund that they will try to replace him with Mandueke - that's how highly he's now being rated.

I'm sure Spurs ae aware now of the risks of a no route to first team' on recruitment to and retention of our best youth players, and that is one of the reasons why Mourhino went the extra mile in pre-season to include 16 year olds Devine and Scarlett as well a few older youngsters. And that's a reason why there have been a number of youngsters both on EL benches and indeed making EL and FA Cup appearances which have been followed up by loans

Not all will make it but I think its probably sent a big signal that youth is back on the agenda (Just a shame - and VERY costly, Mandueke worth £xm now - it went away for a few years.

And last season in addition to Tanganga, Walcott made a surprise appearance in CL.

And there's about 10 players on loan, most of them from the above lists.

Of course, I'd have liked some of them to have got more minutes, but its certainly a big step in the right direction.

Parrott with his first of many, we hope

stevee said:
So unless Dragon 1 is going to be the next manager, I'm not sure he has a clue what he's talking about.
Could be wrong though.

Totti said:
Is Dane Scarlett genuinely meant to be good?

All this time, I thought hype was just over his brilliant name. Or was it Dante Cassanova who is the one hyped up over his name? Can never remember.
Click to expand...