The impact of the Y Word

The word isn’t an insult in Yiddish, never has been. It’s a greeting, like saying ‘mate’ or something similar

It’s part of our identity now and must be kept

The idea that if we stopped singing it, then other fans would magically see the light and stop their disgusting - and let's not forget, almost always unpunished - abuse is utterly laughable.

Supporter
There is some chatter that our family line goes back to a Jewish mercenary that came over with William the Conqueror (no idea if true, never done the research and too lazy to start). If it is though I think that gives me a legitimate reason to shout Yid Army with impunity.

Bill Madrid said:
The idea that if we stopped singing it, then other fans would magically see the light and stop their disgusting - and let's not forget, almost always unpunished - abuse is utterly laughable.
Click to expand...

About a minute or so after the Leeds fan had been removed for screaming "Shut up you f****g Jew**sh c**t", the entire stadium, as if through divine intervention, erupted into a few choruses of 'Being a Yid'. Made me chuckle a bit.

I love the way you feel that the rest of us become a part of it.

I'm going to post an opinion that I doubt will be very popular, but hey ho...
(EDIT: Actually it seems not - thankfully most who have posted on here so far seem to fully support using the word - thank god for that ).

I should start by saying that I do have Jewish heritage, my grandmother is Jewish and my mum actually learned Hebrew a few years ago, such was her interest in that part of her own heritage. However my own personal use of 'the Y word' was never anything to do with that, and that's my point (which I fully expect to get shot to pieces, but as I say, hey ho, I am asking for it here I guess):

I've always shouted 'Y-army!' at places like music festivals and during games in pubs etc, because it's a Spurs chant, not because it has anything to do with Jewish history. Call me ignorant for that if you wish, that would be a fair criticism, but that's the reality. When I shout it, I do so as positive war-cry for my team, with no negative whatsoever towards anyone (other than today's opponents of course!). For me, it is one of many words that have many different meanings to different people. And this is the bit that I will never understand - if a person uses a word in a context where their intended meaning is clear, such as supporting your favourite football team, why can't people recognise and accept the use of that word in that context, why do people have to remove the word from the context, ignore that context, then claim offence as a result?

I'm not saying all usages would be ok - if someone says to someone else 'you fucking stingy y**' or something like that, then I can absolutely see why someone would take offence to that, but if the y-word is used purely to support a football team, with nothing but positive vibes, how can anyone take offence at it? And if someone removes my context and nuance in order to find the word offensive, my concern would be where that ends. If I have a relative who is scared to be around people, can I complain at scousers singing "You'll Never Walk Alone" as it is disrespectful to him? I know it's an extreme and deliberately ridiculous example, but where is the line? I know someone will say it's totally different because YNWA isn't steeped in a history of being used abusively, but why is that relevant if the current usage by me isn't abusive but supportive and positive? I am not responsible for past or present atrocities, my words should not be tarred with the same brush as those of others, my words should be taken with respect given to their context and intent. As soon as we start ignoring context and intent, you could find 'thereby legitimate' reasons to ban pretty much any word that someone doesn't like, and I fear that is the direction the world seems to be going in. And I don't want to bow down to that, so will continue to shout 'Y-Army!' until someone convinces me that it's the wrong thing to do (or - god forbid - punishes me for doing it, at which point freedom of speech would truly be dead).

Please do forgive me those of you who have debated this before on here, as I'm sure it's been done to death many times before my time as a forum member, and I'm sure the rather simplistic opinion I've provided above could be torn to pieces here just as I'm sure it has been many times before - I just wanted to remind everyone of what I expect may well be the most likely reason for most (non-hardcore / non-forum) Spurs fans still using that word.
Last edited: 23 Nov 2021

reclamation of the word, its ours to use as a defiance, I will continue to use it and love it.
the feeling I get when I am walking out of the Lane singing it will thousands of others after a win on a cold day makes me feel warm and safe and loved.

Not this bollocks again. Delete thread surely, this debate has been crushed a long time ago. We're not pandering to the masses who follow gimps like Baddiel as though they actually have a clue. 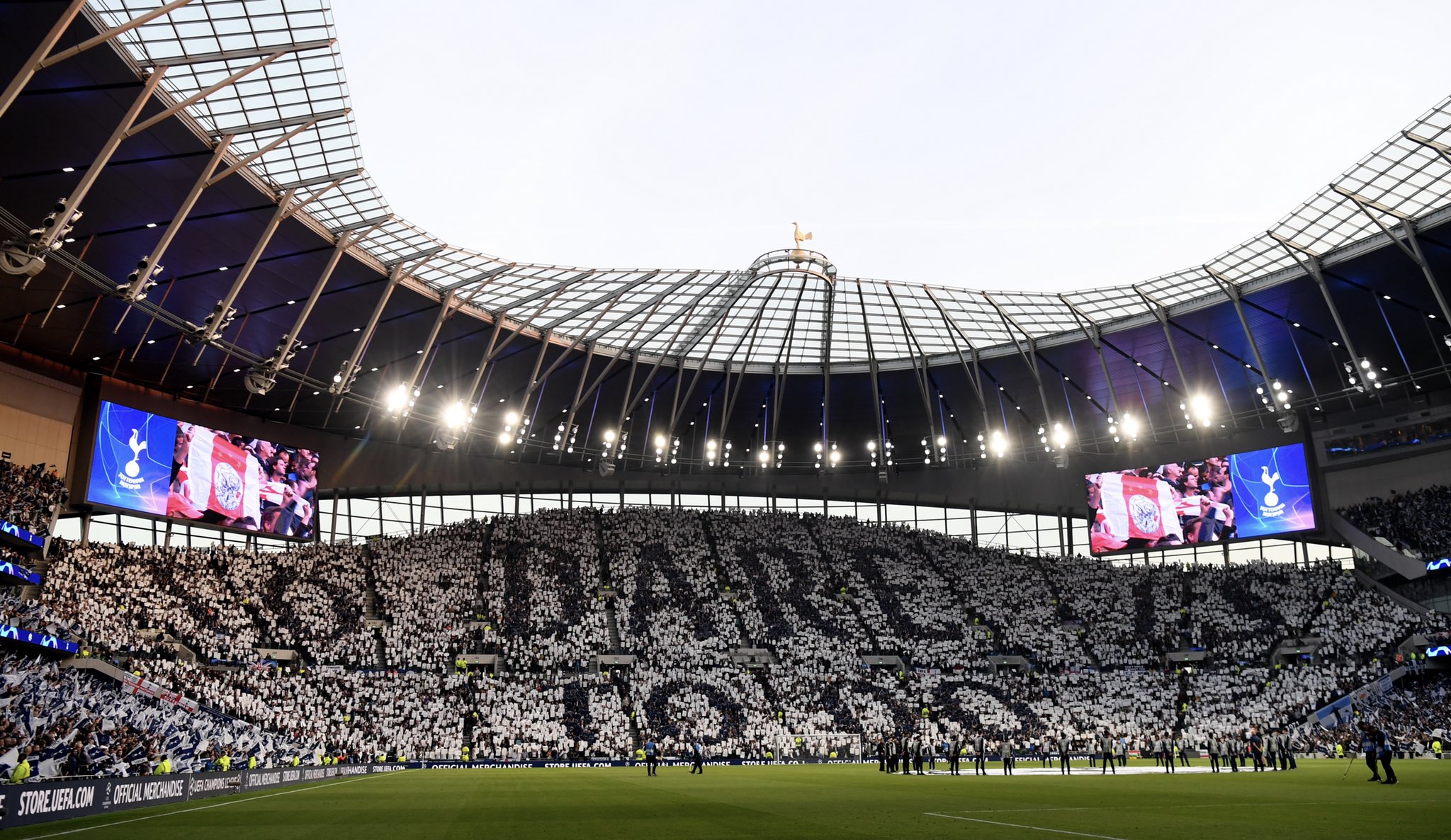 '...I do genuinely believe that the word, and its use at Tottenham, has helped me to understand an element of history that so many choose to ignore'

I wonder if I'm the only person on this forum who read that and thought 'Oh, after all these years, THAT'S what the old man in the hole is saying in Life Of Brian" :/

I'd personally like to see us move away from it now. Think we've made the point about why we adopted it, we were justified in doing so given the vile abuse we got from our nearest and dearest.

I just think its time to move on and stop using the word.

Just my own opinion.

To be honest, having read the article three times now, I'm not entirely sure I understand what his argument for ceasing to use the word actually is. :/

"At the end of the day, if the people we’re trying to defend feel the word does more harm than good, that’s the ultimate opinion that should matter. I firmly believe our use of the word helped to bring a sense of togetherness at the club, especially for Jewish fans, but there’s also every chance it gave the anti-semites a stick to beat us with. And, at the end of the day, their use of the word will cause far more offence to Jews than non-Jews."

Is his argument simply that the shitbags who use it abusively cause a lot of hurt therefore it would be better if no one uses it? That's like saying that because a few people stab people with knives, therefore it would be better if everyone stopped using knives in any context. Even if someone personally affected, for example someone who had lost a child due to a stabbing incident, suggested that therefore all knives should be banned in any context, hopefully we would all agree that this wouldn't make any sense and wouldn't be the right answer. Knives are a great tool when used for kitchen purposes, DIY purposes etc. Surely the right answer is to punish people who stab people, and let everyone else use knives as they are supposed to be used, for positive purposes, harmlessly. Similarly, punish people who use words with obviously vicious negative abusive intents, and let everyone else use those same words with positive intents, harmlessly.

Done - was quite interesting to participate actually. One of the questions is about BLM being dropped by the FA due to its comments about Israel / Palestine. This is the whole problem with allowing politics or 'movements' of any kind into football - they have the potential to contradict each other's believes, then you get in a mess. It's a bit like the old 'who wins out of a transgender foreigner with mental health problems and a gay black cripple' etc (or words to that effect - from Family Guy I believe). It's not a pleasant 'joke' obviously, but you do see the point they are making...

A good piece this, almost same experience for me.

Everyone I know seems to be taking the same view of differing this over the Spurs Jewish supporters to sort out with a thumbs up or thumbs down. I wonder if they could get organised maybe the Club could facilitate this?

On a different note, we all know the abuse will still be there so our collective solidarity should still be present as a response, why not adopt a different song that doesn't use the word but still sends exactly the same message, still keeps with what is now almost a 100yr old identity as being known as a Jewish club and sing something like Hava Nagila.