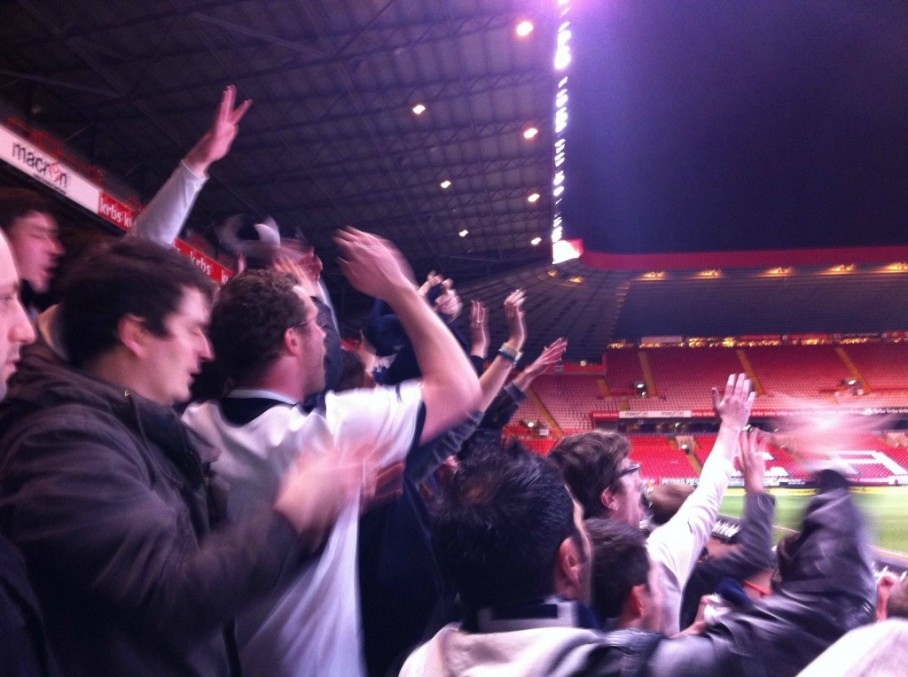 For many years the atmosphere in modern football has been on a steady decline. Sky Sports took over the broadcast rights of top-flight football, the Premier League was formed, and we have seen the type of vocal support, once synonymous with football clubs, suffer ever since. Football had become sterilised, the fan experience less important. The key was money, and making lots of it. Football in England became a commodity, and the fans with it – easily taxable for a chance to see players of ‘world’s most exciting league’ in the flesh. Clubs would hire expensive branding consultants to redesign and re-launch the badge – it should be sleeker, advertiser friendly, free of symbolism that would confuse potential fans from far off lands, the latin slogans translated into English or dropped altogether.

Sky Sports pumped vulgar amounts of cash and launched news channels; the Premier League allowed them to reschedule football matches to make them easier to market. We had Grand Slam Sunday and Monday Night Football. Supporters suffered, while players, club owners, agents, and television stations reaped the reward. And so, fans sick of paying money out only to see their team perform with mediocrity (as they had no doubt always done) would sing and support less, and moan, mutter and boo instead. Winning became all-important, and to many club’s fans, the only thing that mattered.

One part of the reason why I love Tottenham so much is that for years our supporters bucked the trend. We would, win or lose, sing for the shirt and the players within, loudly and proudly without a moment’s thought. The atmosphere at The Lane was heralded across the land by our own fans and the media alike:

Tottenham fans deserve credit for injecting the most electric atmosphere in London football. Chelsea’s Stamford Bridge, Arsenal’s Emirates Stadium and the rest are muted compared to this enclosed bowl.

But eventually, the inevitable happened. You’ll find some Spurs fans that still regard the support we provide the players as something to behold. And in certain games this remains fact. But the more honest of us will admit that over the last few seasons certainly, the volume at the Lane has been somewhat muted.

It’s a difficult thing to remedy. You’re attempting to stir the inner passion of 36,000 people. You’re up against everything that Sky Sports has instilled in your everyday fan. If your team wins they’re amazing, and if they lose they’re nothing. Tradition and love dissolve to nothing when your players have their backs against the ropes.

[typography font=”PT Sans” size=”20″ size_format=”px” color=”#222222[/linequote]We sung our hearts out. Every minute flew by as the passion carried us through a tight and scrappy affair. Tightly packed in the corner of the stand, in front of a blue and white Banner that simply stated ‘FOLLOW’, surrounded by cowbells, horns, and flags, we sung.[/typography]

But then The Fighting Cock had an idea. The Tottenham Ultras. We wanted to find a fixture we knew would be poorly attended. White Hart Lane sells out every home game that the first team plays in. The academy team obviously doesn’t have such a luxury. We decided upon a FA Youth Cup fixture scheduled for 16 February 2012 against Charlton at The Valley.

Forget the word ‘Ultra’. When we decided to use that word we knew exactly what it meant. But we chose it so people instinctively knew what we wanted from those that attended: come along, support the young players who are as much part of the club as Gareth Bale or Luka Modric, and sing as loud and for as long as you can. Show them players, and more importantly, the shirt their wearing, what they mean to us. But the Tottenham Ultras was and is certainly nothing to do with violence. We only harnessed its proper meaning:

Ultras are a type of sports fans renowned for their fanatical and elaborate displays of “support”. They are predominantly European and followers of football teams. The behavioural tendency of ultras groups includes the use of flares (primarily in tifo choreography), chanting/singing in large groups and the displaying of banners at football stadiums, all of which are designed to create an atmosphere, which they believe encourages their own team, and intimidates opposing players and supporters.

We thought that 100 would turn up. Actually we desperately hoped that 100 would turn up. On the morning of the game I had images of just 30, and you know what, we would have been happy with that. What we were not expecting is the Yid Army in force. 250 Tottenham Hotspur fans turned up and did not let up, it was a cacophony of noise, it was everything we had hoped it would be, and more. Neigh. It was the one of the best moments of our Tottenham supporting lives. Passion. Pride. Energy. Everything that following football was once about. And it was a fiver on the door.

We sung our hearts out. Every minute flew by as the passion carried us through a tight and scrappy affair. Tightly packed in the corner of the stand, in front of a blue and white Banner that simply stated ‘FOLLOW’, surrounded by cowbells, horns, and flags, we sung. Not even the confiscation of our marching drum – ordered especially from Germany at no small cost – could quell the tide of Tottenham euphoria. It was truly an amazing thing to be involved in, and no doubt bear witness to.

We lost 1-0. A quality free kick in the 94th minute to smash our dreams. But we were defiant. We would not be crushed. And responded with yet more song, louder than before. The final whistle went and the young players were crushed, many of them slumped to the pitch. But we cheered, and slowly they rose, and they came to us, looked at us, and saw the passion in our eyes. For that moment, we were one together. Tottenham Hotspur, player and fan, a unit, the Yid Army.

Click here for more pictures and videos of the night.