We know the man, we know the name, but what does Louis van Gaal the manager believe in? Is he a “get out there and run around” or is he dossier dude? Jai B delves into his mind and footballing philosophy.

The Fighting Cock recently posted an article on Louis van Gaal that focused on his personality more than his football philosophy. The article received a great variance of opinions in the comments and forum. To counter balance this I thought it would be a good idea to give more of an insight into the footballing ethos and philosophies of Van Gaal. If he is to be our next head coach, it would be a worth a look to see how his system could be implemented at Tottenham as well as the players that would fit into a Van Gaal formation. I’ll be analysing this through the use of slides he had prepared with his time at FC Barcelona.

In general Van Gaal has stuck to the same system throughout all of his clubs, and if needed I will further look into his work at Ajax and Bayern Munich at a later date; but fundamentally there will be significant overlaps.

Van Gaal had set three main targets for the Spanish giants. These were: to win the greatest number of trophies available, to do achieve this with an attractive style of football, and to play this football with the greatest possible number of players that have been trained at the club’s academy.

Perhaps though the main attribute to a Van Gaal style of play, that is not listed, is that the team is greater than all of the individual players.

In his Barcelona presentation Van Gaal writes, “Each individual player has an obligation to meet and defend the idea of the club.” 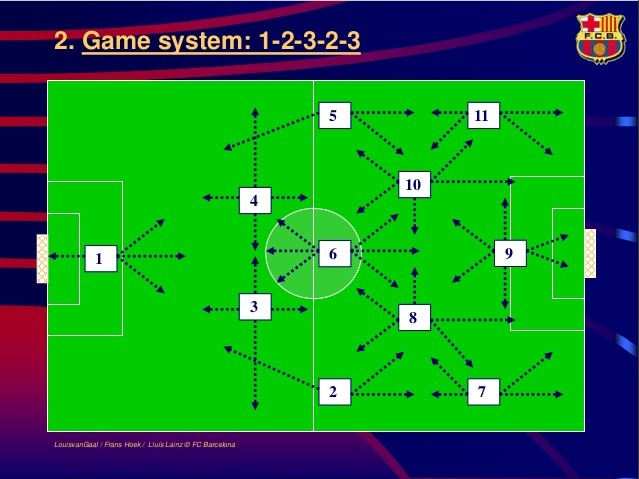 Van Gaal believes that this is important high up the pitch, as winning possession in the attacking third would allow less time for the opponent for positional organisation whereas his Barcelona side would already be set up for seizing goal scoring opportunities after the transition of position.

The current Netherlands manager describes being in possession as, “using the space and time, in relation to colleagues, to take possession of the ball for as long as possible.” Holding the possession is then split into four further subsections: phase construction, preparing to create a chance, creating the chance, and scoring. I will look more deeply into how this is achieved further down in the article. 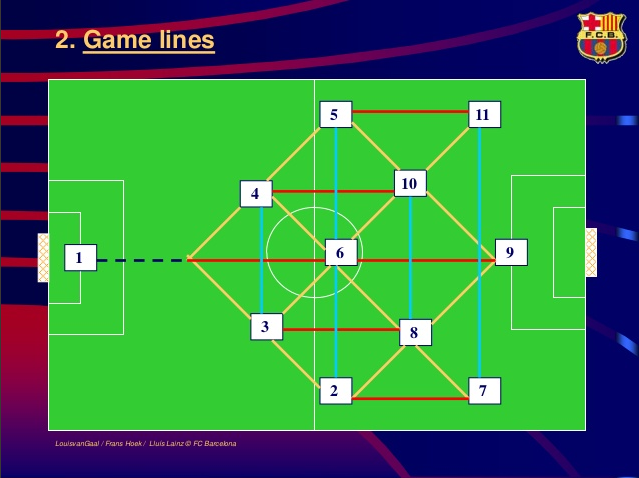 You could argue that Van Gaal’s default formation is a 4-3-3 with a deep lying midfield playmaker, but in truth this one system can be tweaked and changed almost effortlessly depending on the type of opposition that the team is playing against.

This formation is based on a set of positions, with horizontal/vertical/diagonal lines drawn to form triangles which allows for a perfect coverage of the pitch via movements of the ball, with further positional rotations to retain the fluidity of the system, and players, while not deviating from these passing lines. 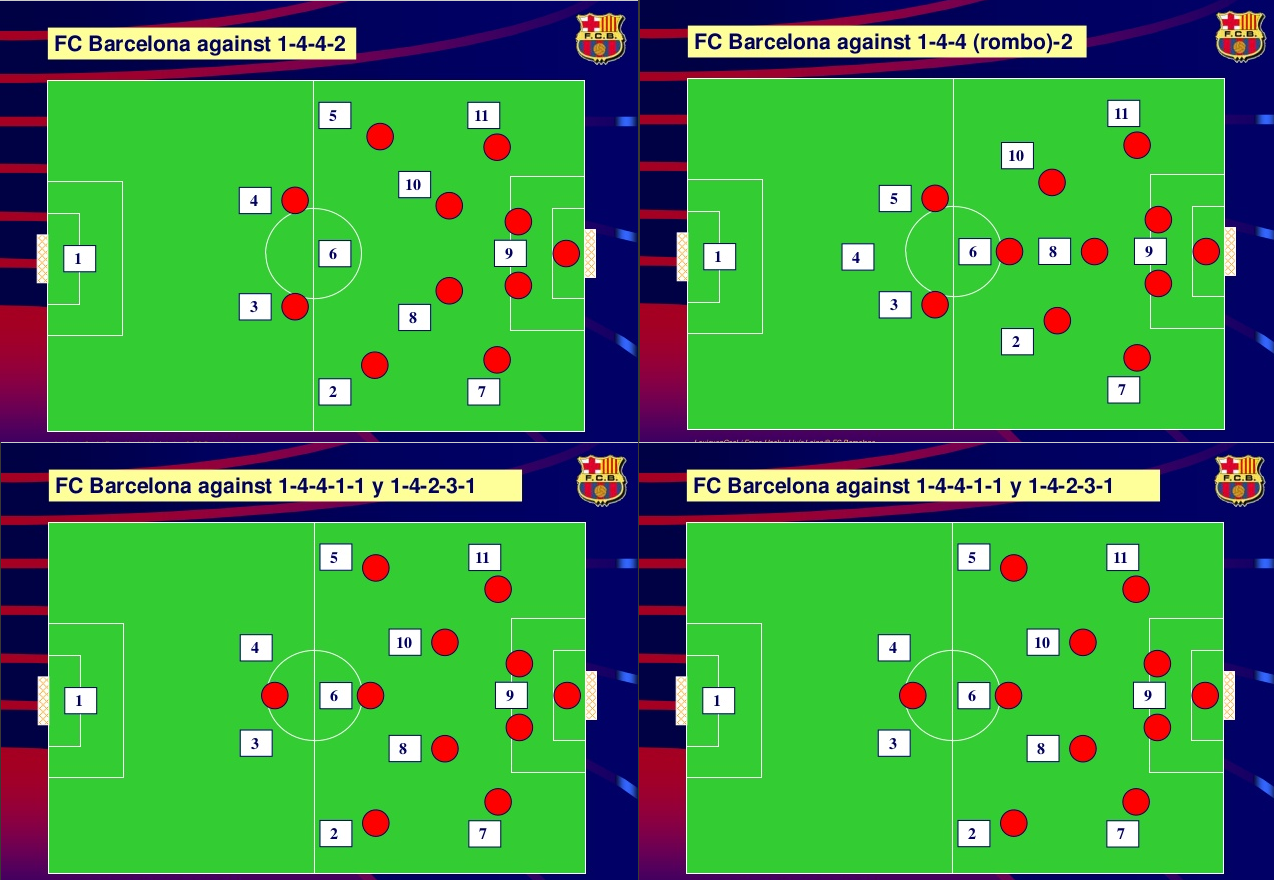 We will look into the passing roles of the centre backs later on. Even if the opposition secondary striker, or number 10, presses the centre backs whilst they are in possession, the number 6 is made free to receive passes and dictate the play.

The number 6 holds the key advantage when playing against a 4-4-2, the player in the number 6 position holds the most paths in terms of passing lines. And when paired with the centre backs in a 3v2 situation against the opposition forwards, the numerical overload would allow for greater time on the ball to pick which of his eight passing channels would be most effective in terms of changing possession into a view to create a goal scoring opportunity; the next phase of possession as outlined above.

Within the teamwork and positional play that Van Gaal had set up for FC Barcelona, and his other clubs, he still appreciates the personality, technical and physical qualities of the players available in his squad. I will only examine briefly, the centre backs, and the three central midfielders.

The two centre backs, most likely chosen from Dawson/Vertonghen/Chiriches/new transfer (I don’t see Kaboul signing a new contract with the club), are as important as starting the attacking play as defending in this system.

It is their responsibility to change the direction of the game, in order to catch the opposition out of position; they must always be available to receive the ball between them with the potential to switch the play of attack.

This is on top of regular defensive work, Van Gaal writes that “ability to communicate marking techniques effectively within a game” as the main mental aspect towards the role of his ideal centre back. With Dawson’s leadership skills and perhaps some more training on his sporadic diagonal balls it is reasonable to assume he would be a stalwart in Van Gaal’s side. 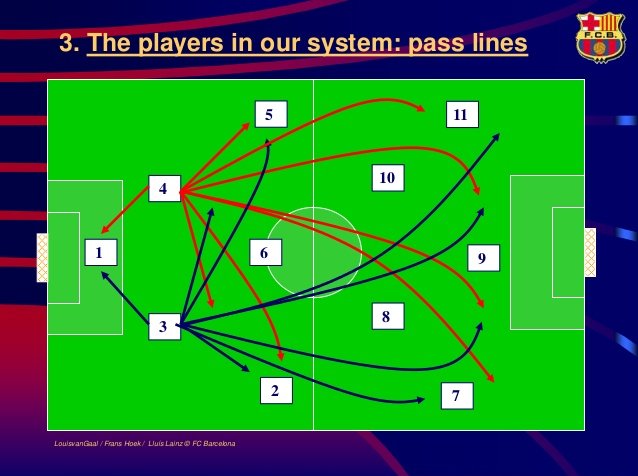 Further forward in the central areas of the field lays perhaps the most important player in the Van Gaal system, the number 6. Both Pep Guardiola and Xavi have taken up this role for Barcelona under the tutelage of the Dutchman.

The number 6 should be always available to receive the ball, can pass the ball directly, and create space in central areas by off the ball movement, whilst also adding to the goals scored column. Which Spurs players come to mind after reading this description?

Personally, I believe that Lewis Holtby or perhaps Moussa Dembele would be the best fit. Holtby, in particular, shows a great work ethic and does have the ability to influence the game from deeper areas.

In his slides Van Gaal has described his ideal number 6 as: “a leader/conductor, disciplined and responsible, showing self confidence with authority and charisma.”

Holtby has captained his national side at u21 level, and has also played under Felix Magath, an intense and hardworking coach, for two different clubs; making him already conditioned for life under Louis van Gaal. It is important to also note that Dembele has previously played for Louis van Gaal at AZ, winning the Eredivisie by an 11 point margin.

In his stint at Ajax Van Gaal said:

“Lots of coaches devote their time to wondering how they can ensure that their players are able to do a lot of running during a match. Ajax trains its players to run as little as possible on the field. That is why positional games are always central.”

The other central midfield players are the number 8, and 10; who clog the central areas of the pitch. One of the main aims for the clogging of the centre is to increase the numerical advantages in the system, in terms of bodies. Through triangular passing rotations the extra men in midfield will be able to move the ball forward, using quick passes, in order to create goal scoring opportunities; with a view to play the ball to the centre backs who can switch the play if an opportunity doesn’t present itself.

The skills that are heavily required from the more creative and advanced midfield players are: the ability to beat a man in a congested area, smart and overlapping runs, quick mental thinking with and without the ball, and the decision making to score goals for the team.

In a defensive aspect, these two players must be able to communicate effectively to construct successful presses to regain possession high up the pitch with a view to create a goal scoring opportunity from the transitional phase. 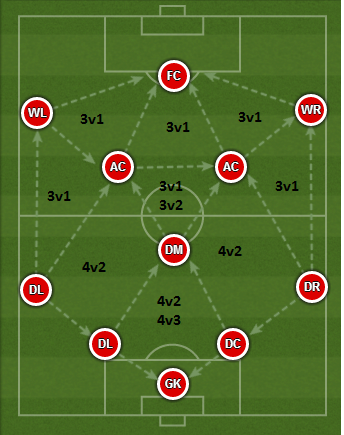 However, this form of passing is not only done in the midfield. Louis Van Gaal’s system has automatically set up shapes of play, known as ‘Rondos’. The above graphic shows the potential overloads in every area of the field. ‘Rondos’ allow for quick passing of the ball, and keeping the possession too.

This is both effective when clearing the ball from the back, and fishing out opportunities to create goal scoring chances in the attacking third. An example of a ‘Rondo’ is shown in the video below, here the Spanish u21 side are successful in keeping possession in a tight defensive area after winning the ball back from the opposition in the transition phase. Then, as I’ve stated above, they move the ball through to the other side of the pitch in via the centre backs to shift the play.

There are three lines of passes used in a ‘Rondo’. These are aptly named: first, second and third line passes. The first line pass refers to a pass that is directed to a teammate using the horizontal pass lines. The second line pass is a pass that goes past a defender, but not in the space in between them, with a third line pass being one that dissects the two defenders. The technical advantages of this is to create one and two touch short passing, with a quick rhythm of play with constant movement, and improved control with the ball at your feet.

Players such as Christian Eriksen and Gylfi Sigurdsson would be ideal for the advanced midfield positions, especially in regards to third line passes, with the likes of Tom Carroll and Nabil Bentaleb probably playing cup games in these positions, or the number 6 role.

Youth players like Carroll and Bentaleb would relish an opportunity to play under Van Gaal as he picks a team regardless of previous merit, age and reputation. If you recall, his third target when taking over FC Barcelona was to use the greatest number of players trained in the club academy as possible.

In fact Van Gaal was the one to promote Carles Puyol and Xavi from the FC Barcelona ‘B’ team. The arrogant Dutch manager has also always kept one coach from the previous reign to help his knowledge on the youth players of the club. This worked wonders at FC Bayern Munich as David Alaba, Thomas Mueller, and Holger Badstuber.

During his time in Germany he also reinvented Bastian Schweinsteiger as a deep lying midfielder, though he was less successful when playing Rivaldo as the number 11 rather than in the centre at FC Barcelona; leading to a famous row between the two. With Rivaldo being quoted as saying: “He does not like to listen to the opinions of the players”.

An ideal situation for Tottenham would be for Van Gaal to take over as head coach for the start of next season, with Tim Sherwood as his direct assistant.

This would allow Tim Sherwood to further increase his coaching potential by learning from the best, and it would also give allow him to work closely with Van Gaal on the development of the younger first team players. With a certain footballing philosophy being transferred to Sherwood and the younger players at the new training centre, this could be a second second start in the modern era of Tottenham Hotspur.