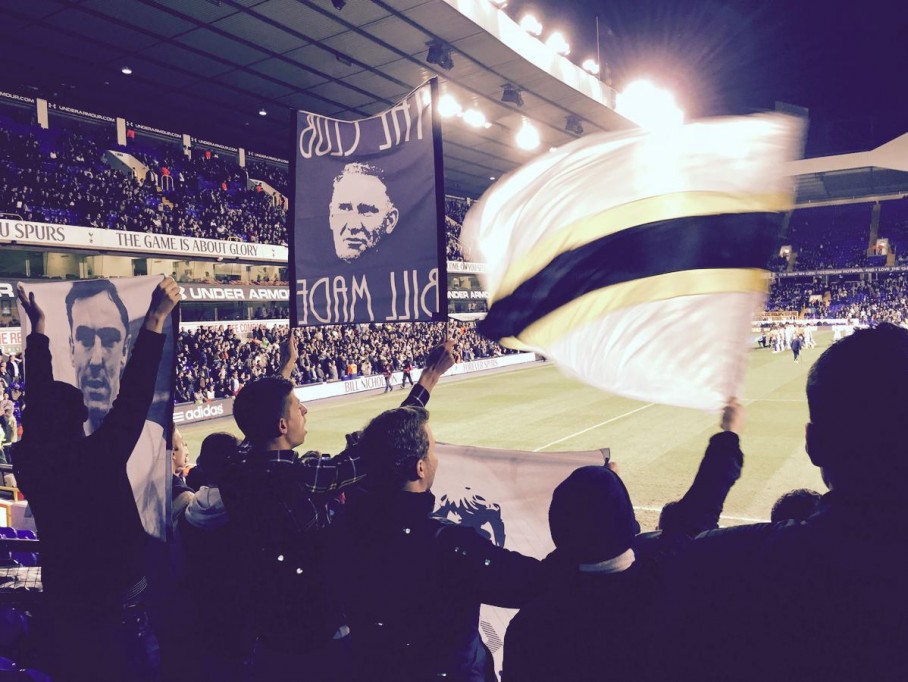 Forget all this transfer nonsense for a minute and let James Harris take you back to a magnificent night in October under the lights at the Lane.

It was a cold Thursday night in October against an unknown team from Greece, in a half empty stadium. The type of night that is normally forgettable, yet a night I’ll remember forever. Standing in Block 35 in the Park Lane, bouncing, laughing, singing until I was hoarse.

The night I walked back to Northumberland Park station with my jaw aching from laughter, the night we fell in love with ‘England’s number one’, Harry Kane. Night’s like that are what really make me miss Tottenham Hotspur and White Hart Lane early in the summer.

The best moment I’ve witnessed at the Lane came later in the season of course; the moment time stood still when Kane looped that header into the far corner. But it was when Asteras Tripolis came to visit that shone a light on the simple beauty of having fun at football.

After Kane’s opening goal of the night came the first real memory – Lamela’s rabona. In my group of five, four of us went crazy, disbelieving of what we had just seen, the ball arrowed into the corner in front of our eyes. The other wondered why Block 35 had erupted into a frenzy over what seemed merely a decent strike, before his jaw dropped with the rest of ours as the scene was replayed on the big screen. Feeding on the excitement, the songs came on louder and the flags were waved more furiously by those of us attending with the 1882 movement, as Spurs rattled in three more goals, Kane completing his hat-trick.

The majority of the match passed as a bit of a blur really, until Hugo Lloris was shown red and was forced to pass his purple top onto, of all people, Harry Kane. The more quick-witted in the Park Lane had already begun the ‘England’s number one’ chant before the young striker had even placed himself between the sticks. I rarely film moments at a match, but the novelty of the situation was too good an opportunity to pass up.

Somehow, inexplicably, Kane conspired to let the resulting free-kick from Lloris’ indiscretion nestle in the bottom corner, via the temporary goalkeeper’s hands. Watching the recording back now, for a moment there was silence, maybe even a groan or two. ‘I don’t believe it!’ one man shouts, but you can hear his smile in his voice. Then chants of our makeshift goalkeeper’s name came on in a wave, followed again by ‘England’s number one’.

The disbelief led to hilarity; for the few thousand who had turned up behind the Park Lane, nothing else mattered, we were singing, laughing and having fun whilst one of our own was struggling to hide his joy at telling us what the score was from his new position, despite his comical mishap. A minute into the post-goal chanting comes the simple observation from one of my friends; ‘no one even gives a f***’.

Feeding on the excitement, the songs came on louder and the flags were waved more furiously by those of us attending with the 1882 movement

For once, everyone who had decided it was worth making the journey to White Hart Lane felt no pressure. There was no burning desire to reach the prestigious top four, the be all and end all of English football if we were to believe what the men and women in the shiny new television studios tell us. We were just having fun.

There’s been no shortage of football since the season ended. The England Under-21’s succeeded in failing just as spectacularly as the first team in a major tournament. Thankfully, the England women have done their country proud, breaking new ground with their achievements in the World Cup. The Copa America has given us another chance to witness some supreme South American talent, including of course, that man Lionel Messi. None of it though can possibly compare to the feeling of walking up the steps of White Hart Lane to look out onto that perfect green rectangle of grass.

Football is wonderful because of how much it means to people; I’d never been as ecstatic in my life as I was when Kane headed that winner against Arsenal. However, it’s also wonderful when it’s nothing more than simple fun. It can be as ridiculous as a home-grown boy scoring a hat-trick, conceding a comical goal through his arms and then going on to be the young player of the year and scoring for his country. And that’s just what makes it so fun.

What’s the point in football if you can’t enjoy it? Like every Spurs fan, I absolutely hate supporting Spurs. However, I’m so glad I do support them. There’s so many let downs, so many what ifs and near misses. It’s worth it though. It’s worth it for moments like Kane’s header, Christian Eriksen’s free-kick against Sheffield United, the trouncing of Chelsea on New Year’s day. It’s worth it for Asteras Tripolis too.

Football is wonderful because of how much it means to people

The break from Tottenham is always needed, they eventually tire you out over the year. When you get a chance to look back and reflect though and realise how much fun you’ve had, even against unknown minnows, it makes you want that feeling all over again.

That night in October I watched with my friends as our local-boy striker fumbled the ball into the same net that our record signing had fired a rabona into just half an hour before. It’s those ludicrous situations that make you realise what a special club we belong to.

There hasn’t been any reason to miss football with all the summer tournaments, but I have missed Tottenham and I’m going to miss White Hart Lane when the famous old ground is finally knocked down. It’s the place where we can feel at our highest and lowest, sometimes both within 90 minutes. It’s where memories are made. It’s where we go to have fun.