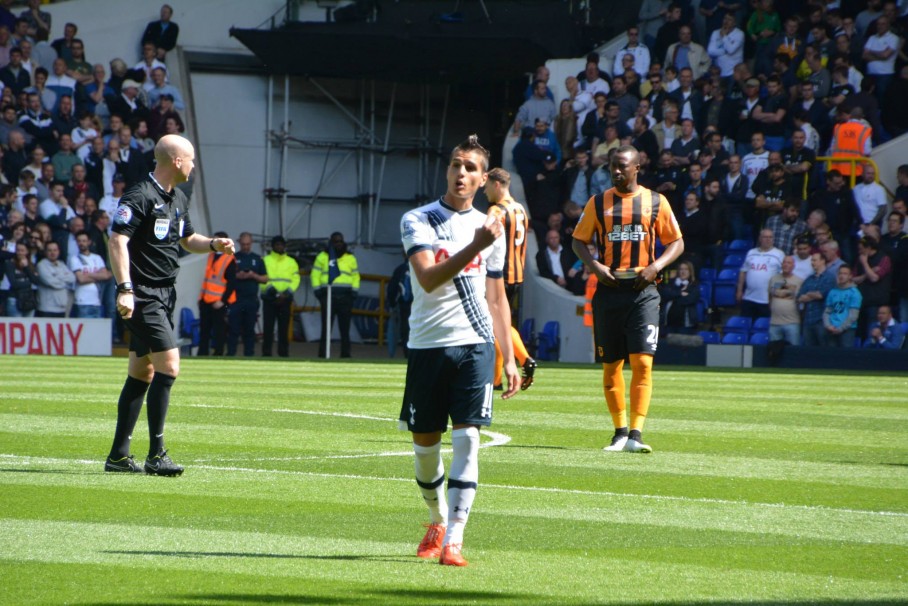 James Harris returns to The Fighting Cock to talk about Lamela and his progress from running joke to game changer.

Then the people rose to their feet. And he walked tall and proud to a hero’s ovation. And Saint Michael (Owen) the Archangel awarded him with man of the match. Érik Lamela’s resurrection hasn’t quite been biblical, but the recovery in the last few weeks has been astonishing, much more so when you consider where he’s come from.

The performance against Manchester City felt like a turning point. Lamela’s form had been simmering up to that game for a while. The moment arrived with perfect timing – every ingredient came together in a wave of determination, flair and excitement. The £30 million performance. For anyone that still had lingering doubts over whether it was merely a decent performance from one of the cogs in Pochettino’s machine, Lamela provided the coup de grâce with a typically clumsy, but superbly executed goal.

The Argentine’s time at Spurs has been plagued by false dawns since his lauded arrival. He’s provided moments of audacious wonder, free from care – of course the rabona will always stand out – but then has quickly followed it up with amateurish mistakes, stalling with the fear and hesitation of a rabbit in headlights. His memorable moments, sadly there are few to choose from, came in games with little significance against opponents of small ilk. Against the league leaders though, Lamela displayed the confidence and technique of a master painter, hopefully what will finally provide the platform for consistently good performances.

Against the league leaders though, Lamela displayed the confidence and technique of a master painter

He’s continued well too, providing further hope that we’re not being led astray once more. The goal away at Monaco may shoulder more importance than just the point it earned. It’s Lamela’s third in four games and will only instil more confidence in the 23 year-old, who looked visibly annoyed to be substituted on Thursday. How much better it is to have a player that feels bold enough that they should stay on the pitch and continue their torment of the opposition, rather than be put out of their own misery by being hauled off.

More impressive than the actual performances has been Lamela’s climb from a pit of abuse and hopelessness to where he stands now. His strength of character has been stretched to breaking point and yet, where so many would crumble, this young, frail man, who arrived in the country without knowing a word of the language, has persevered and dragged himself through. Every punch that has come his way – from injuries, managers, opposing players and fans and most hurtful of all, from fans of his own club, Lamela has taken on the chin and never wavered.

The abuse fired from Spurs fans has been unforgiving, even cruel, to a player that never gave up trying. As his early season form dipped from a promising end to last season, more and more began to give up on any hope they had in Tottenham’s record signing. As the summer dragged on, it seemed many would get what they so vociferously desired – Lamela’s departure. On deadline day, when it seemed a move to Marseille was inevitable, I and plenty of others still didn’t want the forward to leave. What if he somehow sparked? Just one more season. However, I wouldn’t have been too upset if he had made his exit. It truly did seem the end of the road, with no way back.

Just a month on though and Lamela is being talked about in a whole new light; there are already plenty of written opinions on his change in fortunes. What a testament that is to the Argentine’s mental strength. Virtually out of the door, with no visible desperate desire from either manager or fans to keep him, it would have been so much easier for Lamela to retreat into himself. There would still be clubs interested in January and the player had little to owe the fans that had spit venom at him for months.

As before though, Lamela ran as hard as he could for as long as he could, chasing lost causes, committing over-enthusiastic fouls. Now though, he was combining with a more serious attacking threat. More direct runs, more consistent incisive passes, more determination and less mistakes. Against City, the flaws seemed to disappear almost completely. Instead of taking six touches, Lamela would take two, and speed up Tottenham’s attack, rather than drag it to a halt.

Lamela has shown what a bit of patience can achieve; it’s not only those that believed in him the whole time that can revel in satisfaction, but all Spurs fans

Lamela’s own bubble, one in which he’s seemingly never believed that he would fail, has once again shone a spotlight on the fickle nature of modern football. Whether the former Roma man’s twist of fate is permanent or another misleading sense of hope, it should provide a reminder of the virtue of patience. Success doesn’t come instantly and this notion is especially important for Spurs fans to understand right now. Pochettino is still in the long process of construction, much like the builders outside White Hart Lane.

In truth, it’s too late for football fans. The boos will still come after a disappointing results because football now demands that every game is a must-win and blocks the idea of any foresight at the bigger picture. Érik Lamela though, the slight-framed boy from Buenos Aires, has shown what a bit of patience can achieve; it’s not only those that believed in him the whole time that can revel in satisfaction, but all Spurs fans. Some may now be a little more forgiving when things don’t fulfil all their hopes in an instant.

Even greater than that, Lamela has triumphed in adversity that could have broken his self-esteem into millions of tiny shards. Whatever happens next for him, his willingness to always be his biggest believer provides an inspiring lesson to never give up and to work your hardest to achieve what you want most. Lamela’s surely achieved at least one of his goals – acceptance and respect. A great feat indeed.