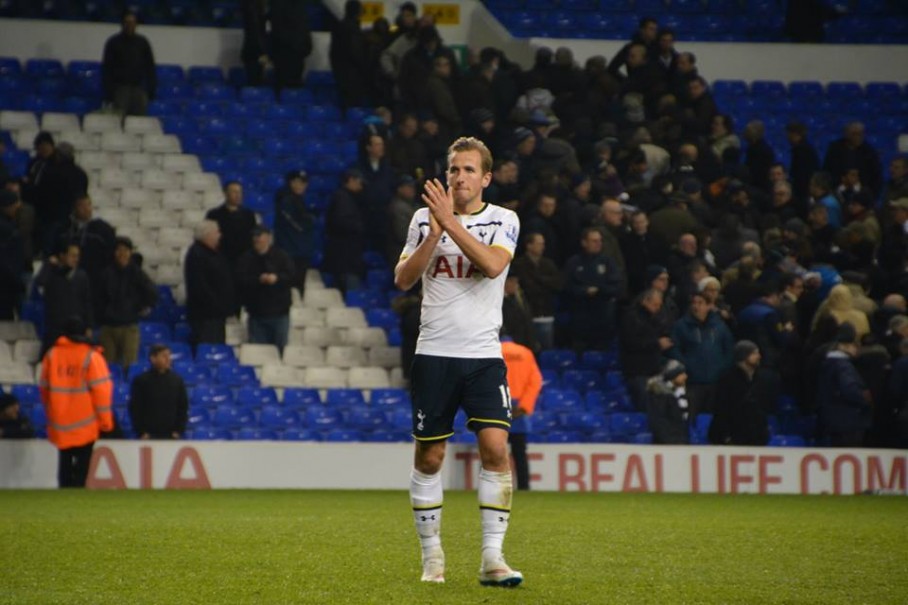 Harry Kane is living my dream. He’s living your dream, the dream of millions. James Harris takes a look at 'one of our own'.

Red faced, arms flailing, screaming until there’s no oxygen left in your lungs – that’s how a derby goal should be celebrated.

That’s exactly how the vast majority of the 36,000 inside White Hart Lane did it and that’s how the goal-scorer did it too. He really is one of us.

Chairs were battered, shins too; I came home with a gash on the back of my leg and an ache in my neck. That’s because when a goal is scored against your rivals, all sense of logic and thought is lost and absolute bedlam ensues. If only we could trap that feeling in a bottle because there truly is nothing like it.

That’s how a derby goal should be celebrated.

Harry Kane knows that sensation just as well as us. He is the hero, the headline maker, but you get the feeling he’d be just as delighted to be in the moshing hordes in the stands, watching someone else score that goal.

And what a goal it was. Kane had been looking more lively than in recent weeks from the early minutes, eager to take shots, desperate to put another knife through the enemy as he had done three times before. Nothing makes Kane come alive more than a London derby, particularly in the biggest of them all.

When the moment finally came, it was sculpted straight from a dream. Dele Alli did well to chase and flick the ball back to Kane, but the England striker still had so much to do. The finish had to be perfect. He nailed it. He absolutely nailed it.

What followed – the crazed celebration from the fan on the pitch that wears number ten – sealed what should have been a perfect moment. The brilliance of the goal and the reaction it provoked would have made a deserved winner. It wasn’t to be, but once again, Harry Kane had provided a North London Derby moment that will last long after his retirement. And he really, truly loved it. He loved that moment with us, as one of us.

Harry Kane is living my dream. He’s living your dream, the dream of millions. Playing for your boyhood club, scoring spectacular goals against your biggest rival, celebrating in front of your fans – those are the things you pretend to do when you’re playing in the garden. And he’s doing it all for real. He probably dreamt that goal the night before.

We’re never going to live that dream (sorry to break the news), but Kane has made it possible to come closer than ever before. If I have to settle for living my dreams through him, that’s fine by me.

Playing for your boyhood club, scoring spectacular goals against your biggest rival, celebrating in front of your fans – those are the things you pretend to do when you’re playing in the garden.

That is the crux of why we’re so lucky. He is the multi-millionaire; the man with the Nike sponsorship; the international superstar. But he’s the local lad, the man with the childhood sweetheart, the bloke with the lisp. He has so much that we’ll never have, but he’s the closest there is to an ‘everyman’ Premier League footballer. It’s unlikely we’ll ever have another to share such an attached relationship.

Sometimes it feels like we take this gift for granted. It’s become normal to see his name on the score-sheet; we’ve become less sensitised to his great feats. We still scream when he scores, we still gush over him on social media, but the same amazement and disbelief is far more restrained. This is a testament to his consistent excellence – he is now expected to score, rather than making up for the failings of more experienced and higher-paid strikers.

This unintended compliment to his regularity in scoring perhaps belies his true worth. His masterpiece on Saturday brought up his twentieth goal of the campaign, the second season in a row he’s achieved this – not bad for someone being labelled a fraud back in September. Even then, for those that bothered to take the time to watch him, his energy and link-up play made him an effective part of the team. Tireless work, clever runs, passing range, clinical finishing – he has it all.

He has so much that we’ll never have, but he’s the closest there is to an ‘everyman’ Premier League footballer.

We are so very lucky to have a player with his talents spearheading our team. More importantly, we are incredibly fortunate that he loves our club so much. He knows what it’s like to live the life in the stands, helpless to what’s happening in front of you, and he’ll forever give everything to make sure we now don’t leave disappointed.

Despite the slightly disheartening result on Saturday, that image of Kane with his arms out, veins pulsing, mask flung to the grass, will live forever. An image of a player that feels privileged to wear the shirt, that represents the heart and soul of our club, of what football means. We should not forget our own privilege of enjoying Kane every week.

However it comes, there will be a day when we are no longer blessed with the fan on the pitch. No player is bigger than the shirt they bear, but Harry Kane truly is like no other. Admire him; savour him; love him. We’ll miss him when he’s gone.