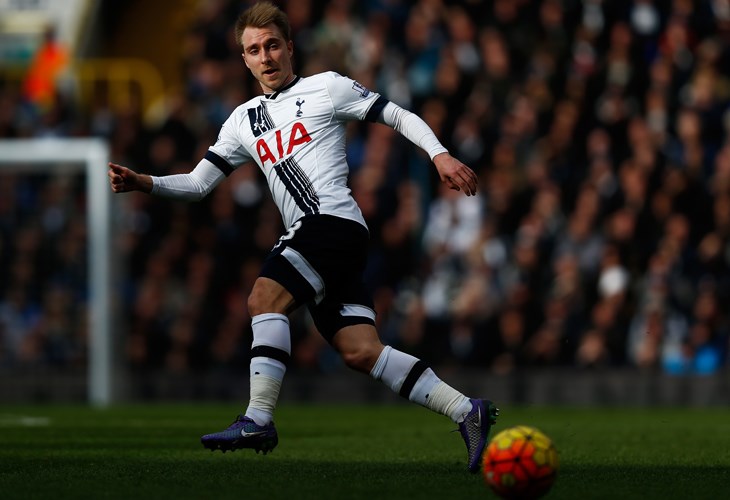 Is Christian Eriksen our most important player? James Harris has a look at our Danish Dynamite and his growing influence at the club.

Pre-season is hard work. There’s the incessant transfer rumours to fill column inches and the extreme over-reactions to glorified training sessions. Then there’s the tension that builds from a lack of movement in the transfer market. Oh, it has been a particularly tetchy instalment this time round. £50 million for Ross Barkley? It’s looking a better deal every passing day.

With no team to watch, Twitter soon forgot how fun last season actually was. It’s back to being miserable, and getting angry over missing out on players we’d never heard of. Send an angry Tweet to @SpursOfficial asking where the Gareth Bale announcement is. Then get in a row from behind your keyboard as someone else didn’t take to your comment too kindly. What a way to spend the summer.

Thank God for Christian Eriksen. Amidst all the seething, the moaning, the worry, it’s just quite nice to see a really good footballer doing really good things with a football. If there was ever a player who couldn’t care less about what’s going on off the pitch, it would likely be the Dane.

The proof of Eriksen’s excellence instead comes from ourselves voting him as our own player of the year, up amongst some very staunch opposition last year

He gave a reminder of what we’ve all been missing. Firstly, a blast from nowhere against PSG. Then he made Gianluigi Buffon a spectator, rounding the legendary goalkeeper with ease to score Spurs’ second against Juve. Two glimpses of what’s to come. Ah yes, relax – it will all be okay. Christian will look after you.

Almost three years ago, I wrote my first piece for The Fighting Cock – an assessment of Eriksen in his second season at the club ( Our Midfield Dynamite – The Fighting Cock ). I raved about the explosiveness of our ‘midfield dynamite’, his ability to change games in an instant. This hasn’t changed, but Eriksen is no longer merely a player of spectacular moments.

In that past article, I claimed Eriksen had higher levels to reach, that greatness beckoned. Last season, the promise that has long been within the Ajax graduate was fully realised.

It is not completely straight-forward to quantify exactly what makes Eriksen so crucial to Mauricio Pochettino’s Tottenham. Dele Alli is still the Spurs midfielder who draws all eyes, and it is understandable why. Philippe Coutinho is the one whom Barcelona desperately seek. Kevin De Bruyne and Paul Pogba are the early names touted for the Premier League’s next player of the year.

The proof of Eriksen’s excellence instead comes from ourselves voting him as our own player of the year, up amongst some very staunch opposition last year. The appreciation of him can only come from consistent viewing – not merely comparing stats, or tuning into Match of the Day. The highlight reel doesn’t do him justice anymore. But we know exactly what he’s about. He remains our little secret – at least for now.

No one else at our club is such an adept reader of space. Eriksen not only finds it for himself, but distorts it for others. If Alli is our Thomas Muller-esque Raumdeuter, or ‘space invader’, Eriksen is the space dictator. When not dropping pinpoint passes into open patches of grass himself, the 25-year-old is drifting along the front line, forging pockets for Alli and Kane to exploit. It is this movement that also allows the bombardment of Pochettino’s full-backs to be so effective.

No one else at our club is such an adept reader of space. Eriksen not only finds it for himself, but distorts it for others

When he’s on the ball, there are few better. If a defender commits, he’ll sway past them with the guile that we’ve known about for years. Stand off him and Eriksen will move the ball on with frightening precision. A new feature of Spurs last season took advantage of this particularly well. It became common to see Kyle Walker charge ahead down the right before pulling it back to Eriksen. It provided the perfect angle for the midfielder to take a touch and swing in the dangerous delivery that twice undid Chelsea at White Hart Lane. The physics-defying assist for Alli in the FA Cup semi-final was just an extreme version of the same move.

Flashes of brilliance like that have been retained by Eriksen despite his new responsibility. He remains our biggest threat from the edge of the box, one of our sweetest strikers of a ball. That swerve to undo Swansea for the third goal in the Liberty Stadium comeback would have Pele swooning. Letting the ball do the work for him and unbalancing the defender in one quick movement before finding the corner demonstrated the confidence in his ability to out-think the opposition.

These masterful moments of genius are now merely the cherry-topper. The pitch is Eriksen’s now and he coordinates how everyone plays around him. A burst of speed, or an unexpected driven pass to feet and suddenly the Dane has quickened the tempo. He’s also one of Tottenham’s prime hasslers; if a player gives an inkling of hesitation, he is on top of them to force the counter.

It is why he arguably ousted Mousa Dembélé last year as the one who keeps Spurs ticking. In attack and defence, Eriksen is so often the man others react to. They support his press, they fill the gaps he makes and they take advantage of his deadeye passing.

The pitch is Eriksen’s now and he coordinates how everyone plays around him. A burst of speed, or an unexpected driven pass to feet and suddenly the Dane has quickened the tempo

From late November, hardly a game passed where Eriksen’s presence was not felt. Therein still lies the remaining chink in his armour. Starting a season in November isn’t good enough to be the very best. The drastic change in performance felt like a typical Eriksen purple patch. We’d seen it before. However, the games went by and each time he’d be in the frame for man of the match. It became increasingly clear that this was more than just a rich vein of form and he was now the vital ingredient in the club’s success.

The pre-season reminders of his talent are very likely just a taster. It doesn’t seem likely that the new player that emerged last year is going to regress back into a state of inconsistency. This Eriksen doesn’t just spark; he dominates. We have arrived at the point where the world is going to learn our secret.