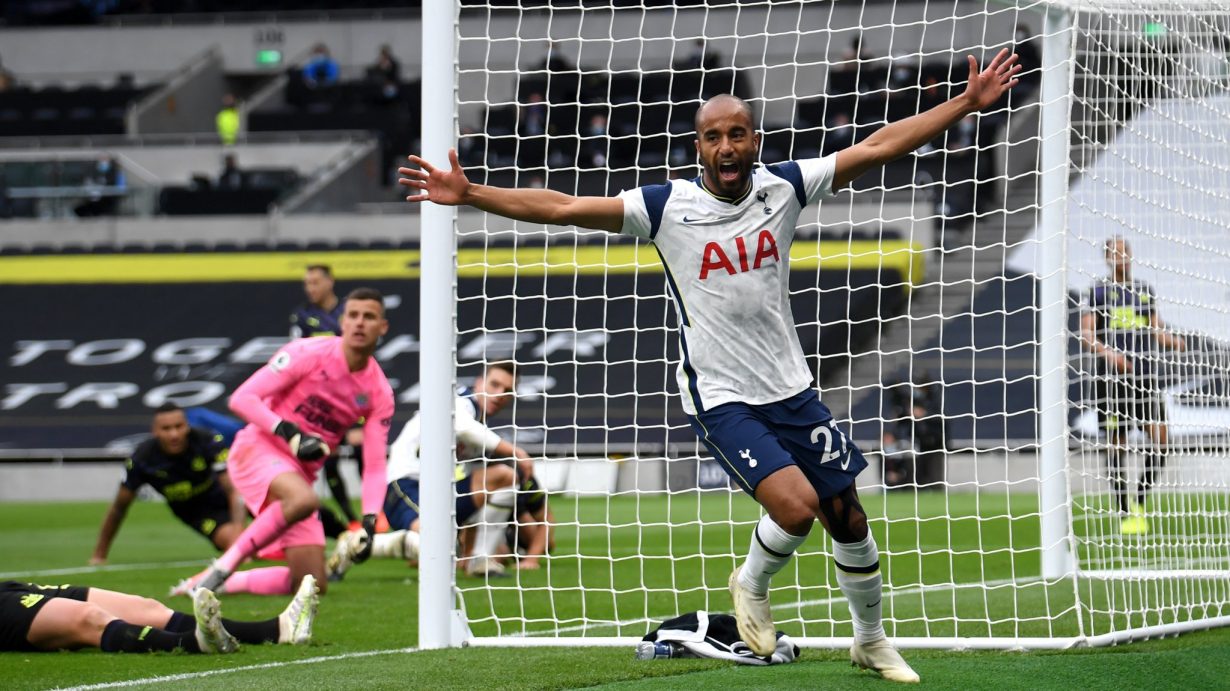 Newcastle left Tottenham Hotspur Stadium with a wholly unmerited point thanks to an injury-time Callum Wilson penalty awarded for handball against Eric Dier. Beyond denying Spurs a second league win of the season, it was a decision that served to confirm that the handball law is thoroughly broken. Such was Jose Mourinho’s disgust at the incident, the Spurs manager stormed down the tunnel before full-time. It was left to goalkeeping coach Nuno Santos to press Tottenham’s protestations to referee Peter Bankes at the end of the game. Santos received a red card for his troubles.

Tottenham were entitled to be angry. Spurs dominated this game from the first whistle to the last and never looked in danger of relinquishing a lead given to them by Lucas Moura in the 25th minute. Indeed, Wilson’s penalty was the Magpies only shot on target in the entire match. Robbery doesn’t nearly describe it. This was a full-blown miscarriage of justice.

Tottenham’s first chance came in the third minute with the award of a free-kick in shooting range. Giovanni Lo Celso, making his first Premier League start of the season, struck a fierce drive that Karl Darlow did well to parry. Even better was Darlow’s smart reaction to repel Harry Kane’s effort as he seized on the rebound. The Newcastle stopper and his goal-frame were the only sources of resistance to a rampant Spurs attack in the first half.

The opening goal, coming in the 24th minute, inevitably involved the combination which put Southampton to the sword last weekend. Son fed Kane down the left, allowing the England man to drive into the Newcastle box. Kane’s step-over created the yard of space required for him to cut the ball across the six-yard-box where Lucas Moura was on hand to apply the finish. The goal will have come as a great relief to the Brazilian who had failed to net in his previous 22 league games. With Gareth Bale’s much-heralded homecoming, it will surely be Moura who makes-way in Tottenham’s attacking trident.

Within two minutes of taking the lead, Kane came close to doubling it. Only a save at full stretch from the impressive Darlow kept out his curling right-foot shot. Shortly after with Spurs laying siege to the Newcastle goal it was only the woodwork that kept them at bay. First Son rattled the post from outside the box, then his left foot drive cracked the bar. While the South Korean cursed his luck, Eric Dier was soon left cursing himself.

The big defender had a glorious chance to wrap the game up before half-time when he failed to head home unmarked from a corner with the goal at his mercy. It was the sort of miss that is immediately followed by an apology from the TV commentator for any ‘inappropriate language’ the audience at home may have heard. For a miss this glaring, Dier’s words of self-reproach seemed entirely fitting. Worse for Dier was to come.

At half-time Son suffering from a hamstring complaint was replaced by Bergwijn. Son had played every minute of Tottenham’s competitive games this season and Mourinho will now face an anxious wait to discover the severity of the injury. Without him, Spurs were a less potent attacking force. Nevertheless, so limited were Newcastle’s ambitions, the home side appeared to be heading for a comfortable victory as the second half progressed. Even with the 76th-minute introduction of human battering ram Andy Carroll for the anonymous Almiron, Newcastle failed to mount a meaningful attack. In fact, the closest they came to a goal was when a Carroll knockdown resulted in Ben Davies smashing an unduly panicked clearance against his own man Emile Hojbjerg. The resulting rebound was close enough to Hugo Lloris’s goal to cause a few palpitations in the Spurs dugout.

That appeared to be the sum total of the Newcastle fight-back. Then deep into stoppage time Carroll rose on the edge of the box for one final diagonal ball sent in optimistic search of his head. Dier rose with him. The England defender’s back was turned to Carroll, making it impossible for him to see the direction of the ball as it struck his arm from Carroll’s header. The idea that a game-defining penalty would be awarded for something so innocuous seemed absurd. But we are living in strange times. The current application of the handball law threatens to reduce football to little more than a glorified game of dodgeball. Players will soon spend the entire game blasting balls at unwitting opponents’ arms on spec. Having been recommended to review the incident by the VAR official, the on-field referee Bankes (reduced to subservient automaton) pointed to the spot.

As it was Lloris was unlucky not to keep Wilson’s penalty out having guessed the right way.

It would be tempting to say Tottenham paid the price for earlier missed chances. But that would let the real culprits off the hook. It’s not football anymore.