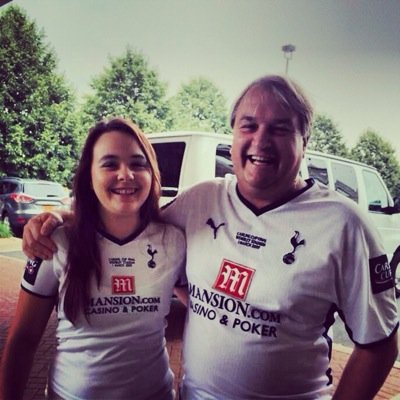 Are you a bigger, better Spurs fan because you were lucky enough to born within the friendly confines of the M25? Or what if watching your team is struggle and a visit to the Lane means a flight?

Ok, I will come clean – I’m not a Londoner…and I don’t mean I’m from Kent. I’m from Dundee in Scotland. Those of you who know your Spurs history can probably figure out exactly how I became to be a Spurs fan, but more on that later. I have spent most of my life as a faraway fan. The ‘who is the biggest type of Spurs fan’ debate is one that comes up from time to time and I have seen it from both sides.

Are you a bigger, better Spurs fan because you were lucky enough to be born within the friendly confines of the M25? Or what if watching your team is a struggle and a visit to the Lane means a flight? Does that extra commitment to see the Lilywhites mean something too?

Sometimes I get jealous of the people who spent every Saturday at the Lane, in the same section, with the same people throughout most of their childhood. Growing up first in Dundee and then the United States, my Spurs journey was more long and winding than a few stops on the Overground.

For those of you who have already guessed, my Spurs connection is through the incredible Alan Gilzean. He was my Dad’s favourite player at Dens and then he made his big money move down South to Tottenham and so began our family’s love of Spurs.

In fact, the first time I ever saw the mighty Spurs in person was at St James’ Park in Newcastle. It was the closest Premier League ground to us and we could do the trip in a day. Spurs seemed magical then, but very far away. Little did I know, they were about to get further away so I have been able to experience this faraway fan phenomenon from both sides of the Atlantic.

When I was 14 , we moved over to the US and watching Spurs became much harder as a noon kick-off morphed into a 7am one. However, my bedroom shared a wall with the living room so I could wake up already knowing the score based upon what my Dad had been shouting at the TV. Also, not being a fan of one of the more famous English teams gave me some street cred with my new friends.

However as I got older (and finally over 21), I was able to go out to the pub to watch the game. Yes – Americans really do get up and drive to the pub at 5/6am on a weekend to watch Spurs. If that isn’t commitment, I don’t know what is.

Even more than that, American fans will also plan their entire years annual leave around coming to see Spurs and many lost out on a lot of money when the new stadium didn’t open on time. Most Americans only get about 10 days leave a year and many spent it all on a trip that ended up at Wembley. I wonder how many London based fans would still go to Spurs games if they had to use all of their holidays, spend thousands of pounds and only see one game.

Other than Spurs, I support a few teams scattered across the USA. I’ve been a (LA then Oakland now) Las Vegas Raiders fan my whole life and we used to travel once or twice a year to watch them live. Even though I have grown up watching and supporting them, I don’t think I can claim to be on the same level as the hardest of core fans in Raider Nation.

Yes, we flew out to the Bay area during their last season so I could be in the coliseum one last time before they moved to LA, but I still don’t think that earns me any more ‘fan credit’ than those who spent their whole lives there. It is a place I love and I will miss, but I fully acknowledge that those who stood in the black hole for decades and their season ticket holders are much “bigger/better” Raiders fans than I am.

Equally, I don’t think fans who live abroad can claim to be as “bigger/better” of a Spurs fan than our season ticket holders because even if watching a game is difficult or inconvenient, it is not the same commitment to paying upfront and committing most of the year to your team. Especially at a club where results can be, lets go with mixed.

However, I eventually made the decision to leave the States behind and move to London. If I was going to leave America, the only place it could be is London. There are many reasons for my decision, but one of those was definitely because of Spurs. You see that’s the problem. No matter how much you love the club, no matter how much you know about it, you just want to be there. Supporting from afar is just not the same.

When I moved to London, I went to every Spurs game I could get tickets for. I didn’t care who we were playing, what competition it was, I just wanted to be at White Hart Lane. And let me tell you, it was worth it. I loved every second I spent in that ground and I still wish that I had spent a little while longer at the last game I went to. Spurs fans are beautiful and that stadium was warm and loud. I finally felt like I was home.

Despite this article and the never ending discussion of which fans are better than others, I don’t think it actually matters and I don’t think it helps our club in any way shape or form. There are Spurs fans who I would consider better Spurs fans than me – season ticket holders being the obvious example. To be honest, I don’t think that you can actually quantify who the best Spurs fans are. We all have our ways of loving our club. I would just say that if you are lucky enough to have grown up on the shelf or in the Park Lane, I hope that you know how lucky you truly are.

However, I would rather be a part of an inclusive fan base where we bring everyone into the fold and we educate each other about our club and culture than we become exclusive because someone doesn’t fit our idea of what a “proper” fan is. We shouldn’t slate each other because of the luck of draw of which postcode you happen to have been born in or where you ended up moving to.

Having a bigger global reach can only help our club become stronger in the long run. Also keep in mind that no one chooses to support a club with any kind of ill intention. They just want to be part of our family and they dream about being able to stand with us shoulder to shoulder at White Hart Lane and really, who could blame them?