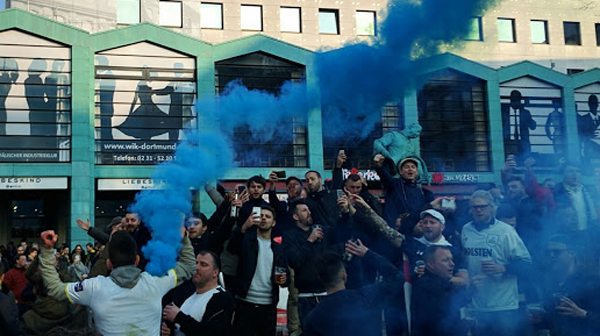 And so it began. From birth, despite not being born Tottenham, through osmosis, nature and nurture, through breathing it arrived. Hate.

It’s a powerful word, but this is more than that. The very fibre of my being cannot exist in its vicinity, yet I can’t live without them. They are heroin, they are chocolate cake, they are that first cigarette with a beer on a sunny day that you don’t smoke because you gave up.  This Sunday we’ve built a big f*cking wicker man. Let’s bundle them in and set it on fire. End it.

For too long we’ve endured the St Day, the mocking and the accusations of choking. The shadow bantz and the endless reminders of how over a decade ago they went unbeaten. A feat that probably deserves recognition, but even that they fu*ked. They even sold that great, once in a lifetime achievement; just slapped a label on it. They’re Sports Direct, they are a classless collection of sporting attire who should have started and ended their life on the floor of the basement peepshow. Sports water bottle sipping nonces.

Their manager. One of the greats. A man who gave them an identity, a man who gave his life to the club, who devoted everything he knew and everything he had to make them a team worth talking about is being hounded out by the same people he gave football to. Three finals in four years but it’s not enough because a TV company says they’re not in a title race. You dumb little banner-waving, crying collection of babies — he is your club, bow down and beg forgiveness because he is your God. Vacuous.

A club that built statues but forgot who they were, who built a new stadium on a piece of land that wasn’t theirs and called it home. These are the types of people we are dealing with. One morning they appeared: noisy, classless, dragging their children around by their ears, tossing litter into the wind, chasing dogs, piling filth on top of filth and leaving nothing behind but a giant pile of human sh*t steaming in the cold, no toilet paper in sight, just human sh*t. Scum.

A Kickstarter crowd-funding account to hire a plane. A CO2 footprint so they could fly a hash tag over the midlands in a game they lost. Humans wasting precious natural resources in order to rage a vendetta against their club. Whales are dying, kids are being blown to pieces, but you know “I can’t stand it anymore.” Fluff.

One of their greatest is a man who symbolizes disloyalty. Money grabbing, Jesus-grassing, “they’ll come back in coffins,” delusions of grandeur, self-importance, and ridicule. He is scum. He. Is. Judas.

Recording yourself at a match then laughing at someone else for doing the same. Tw*t.

A club who’s most important player is embarrassed to play for them, throws hissy fits at his teammates and mocks the “59k” that show up to watch their limp dick display by chuckling on the bench when substituted. Their most important player who hails from a country that only a few years ago inspired the world when 33 of his fellow countrymen stood up to death, but he wails like baby over a cut lip. Malparido.

For never earning the right to play in this division. For falsehoods that even hundreds of years later are still falsehoods. Never forget. An object brought to life in falsehood retains the taint. This will never come off, this won’t scrub off. It’s tattooed into their fabric. Falsehoods begets falsehood.

Created in deception means they stay in deception, it is who they are, time doesn’t heal. Time won’t wash the stink off them. The lies, the cheating that is their identity, never forget this, remember this with pride. Hoist this up the flagpole. They’re fake, they shouldn’t exist. They’re that feeling after a massive night of booze and you think you’ve done something wrong. They are the nausea. They are the throbbing on our souls. They are the greasy breakfast you can’t keep down, they are the uneaten festering kebab on your neighbour’s wall, and they are the life choices you got wrong. Mistake.

As others have said:

Never forget. Never let the hate go. This Sunday remember all of this. Take it with you wherever you are. Use it, drink it in and turn it to something great.

They don’t exist, but they do. Now we end it.