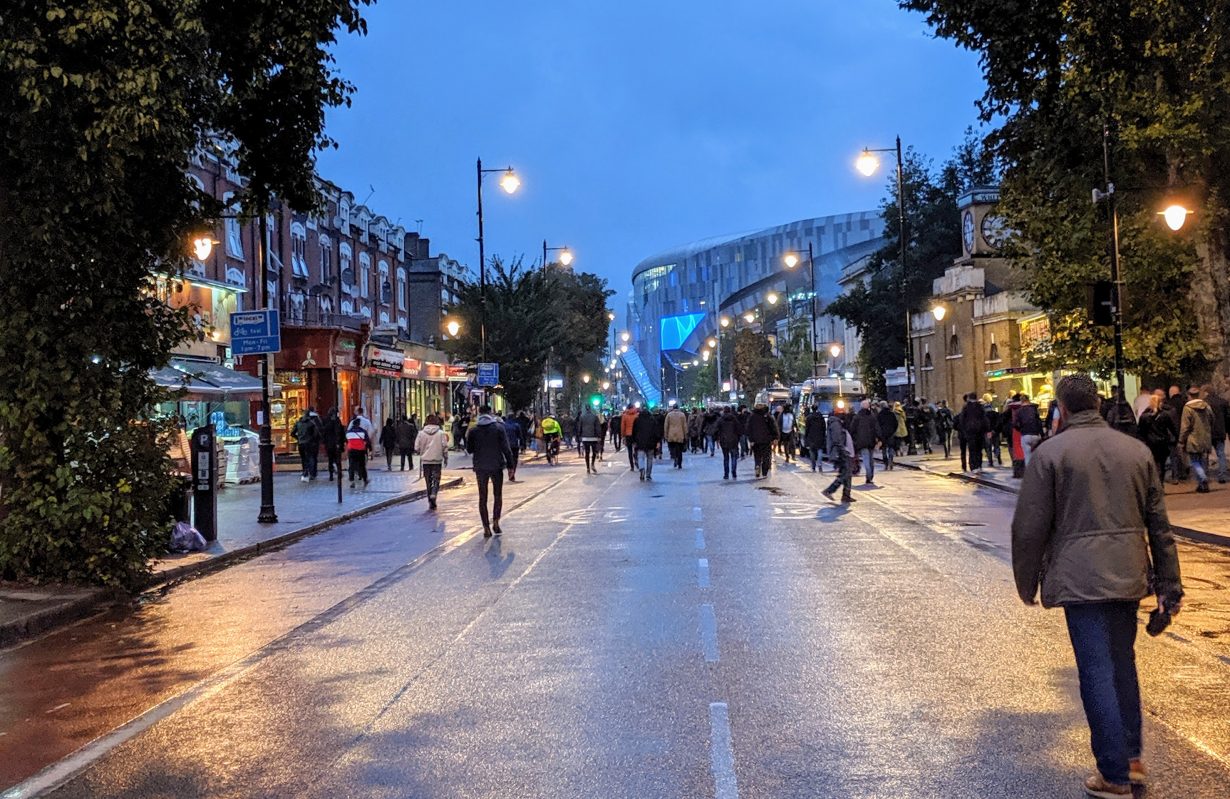 Losing football matches is a regular occurrence, but a capitulation is warning that something is fundamentally flawed

I’m stood on a mound of earth. It’s slippery, the rain is falling around me and the waters of #PochOut are creeping towards my sodden feet. I feel I should just surrender, I feel I should stand firm. Am I an Outy am I an Iny? Do I want his chubby face gone? Do I want to grab him and say “stay you wonderful little man?”

We’re not one thing or the other. We’re neither In or Out. We’re great, then we’re a shambles. Our identity is so confused we could be Sammy Jankins, but we might be Leonard Shelby.

As I stood with the rest of my block, watching the rain catch the floodlights and swirl down towards the lower rows of the south stand, I was proud. My Tottenham, our Tottenham were thrashing around the pitch, giving Bayern a taste of our football.

Intensity, pressure, top class levels of skill in a Tottenham shirt. Ndombele was insane, Dele was at his space obliterating best, Kane was a missile of intent and Son was snapping around like a puppy chasing a tennis ball.

But we’re unable to sustain who we are for more than 30 minutes. Our football is a sandcastle and the half time whistle the sea.  Had we kept the scores level at the break perhaps the game would’ve been different. Maybe they wouldn’t have made the change that ultimately unravelled us.

Bayern could see our weaknesses. Hit them wide, press the middle and expose the full backs.

Thiago came on to the pitch and set up shop on Harry Winks’ head. Coman, Gnabry and Perisic stayed so wide they had AstroTurf pellets on their boots. Throw in Poch’s bad decision making, sprinkle in a lack of fight/belief/hunger/passion and you produce a 2-7 defeat.

As I shuffled across my block towards where my friend was sat, a journey made easier by each goal we conceded, I was done. Poch Out. Get him gone. A team that’s successful is said to be a representation of its manager, therefore what about a team getting spanked?

Losing football matches is a regular occurrence, but a capitulation is warning that something is fundamentally flawed. Pochettino’s usual fix to any football drama is to throw all the players at it, but this tactic is starting to age. As the game ticked by Poch had surrendered midfield and exposed our faulty fullbacks.

We were a chip pan on fire at 4-2 and he poured Evian into it. Our discipline went and the players became the ones in charge. It was upon their shoulders to win it; the manager was steering a car that had been launched off a cliff.

When the top teams are chasing a match, they stick to their methods. There might be a few tweaks but its controlled. They trust the system, our players don’t because there isn’t one. Lamela, Eriksen, Kane, Lucas and Son all on the pitch at the same time is a sign that he no longer has a plan.

I can forgive many things, but Poch’s lack of a plan or an idea of how we play is unforgivable. Sessengon doesn’t fix this and Lo Celso only adds another player for him to chuck at a problem.

Poch has to go, he must, if not for his benefit then ours. This isn’t me chasing him with a flaming torch, but it’s simply an acknowledgement to his problems.

He’s unable to create a team that plays to our strengths and protects our weaknesses. If your fullbacks are weak, protect them or change them. If your central defence is slow, protect them with a defensive shield or play a centre back with some legs like Sanchez.

As Arsenal continue to show, the Premier League is a forgiving place. You can have a bad day, but rely upon firepower. In Europe, things are different, sometimes they bring a gun to a knife fight. Yesterday we were wielding a Swizz Army knife, Bayern pulled a Glock .

I’m not ready to give up on this squad. There’s too much talent, but I’m ready to give up faith that Poch can rekindle it. The team is in need of a fresh approach, a resetting of the dials and a implementation of proper system.

It breaks my heart, but his time is now done.

Pain my friend. More of it.