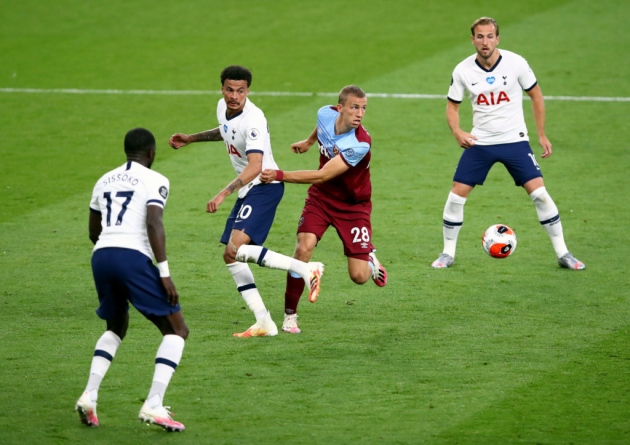 How many matches can you think of in the past 18 months where we have conceded the first goal, or we concede from an individual error?

Spurs returned to Premier League football after a long enforced break. To have them back playing matches again was nice (even though it never felt like that prior to lockdown). Absence makes the heart grow fonder, I suppose. Two games played and four points collected. At least Mourinho will be pleased.

Yes, it’s only been two games. Yes, we need to play a few more to really drop deep into analysis. But let’s dip our toes into the reshuffle. What was the difference this time round, in comparison to before the pandemic off the pitch put a stop to the Spurs pandemic on the pitch?

IN WITH THE NEW
It was clear for all to see that Spurs’ biggest issue for well over a year is our back four. Too many defensive frailties. Always guaranteed to gift the opponents a goal. Individual errors, lack of composure, lack of leadership, lack of concentration, lack of clean sheets. Just the one or two little things that need sorting.

In some of the games we conceded cheap goals even before the 10th minute was up. Mourinho has now decided to pair Eric Dier and Davinson Sanchez as the new centre backs since the restart. Both played well alongside each other so far in the two returning games. It’s a young talented partnership (if still rough around the edges) that will only improve and grow the more they attain synergy.

Dier has the leadership qualities and is dominant in the air. Sanchez, the younger of the pair, has the pace and strength. 2 games played together, 1 goal conceded, 1 clean sheet. A modestly decent start. A foundation. Not too much complacency to groan at, but still not super sharp. But it would be unfair to go hard on the pairing, what with the surreal nature of Project Restart.

OUT WITH THE OLD
Let us not forget the excellent Belgain pair, Toby Alderweireld and Jan Vertonghen. They have been fantastic servants for the club over the past five years. Probably, the greatest ever centre back pairing at Spurs. Toby is 31 and Jan is 33. Time and age have caught up with them both and now is the right to time for the change. Their recent performances have shown that we have to freshen it up. Jan will move on to pastures new. Toby, will most likely, start from the bench. We’re going to miss the diagonals. We’re going to miss the occasional Superman reveal.

SETTLED
In the match against MU, Spurs were unfortunate to concede a late penalty. The foul on Pogba, which led to the penalty, was the only blemish on an otherwise good defensive performance. We almost won the match 1-0 in typical Mourinho style. Almost a Jose sort-of-masterclass.

The same settled defence was selected for the WHU match. Again, the defence did their job wonderfully well, limiting WHU to very little and not giving our nemesis, Antonio, a clear cut attempt at our goal. Although it’s important to point out just how inept the visitors were in terms of attempting to puncture our backline. But there was no lapse in concentration from us to gift them a way back in.

Too much chopping and changing of the defence is not good thing. What Spurs need going forward is a settled backline. The Dier and Sanchez partnership will further improve with each passing game. The early signs are very encouraging, thus far. With Davies and Aurier as the full-backs, this will be Mourinho’s preferred defence for the remaining matches. At least that’s my hope.

We are all well aware of Aurier’s inability to defend and to have him further up the pitch, akin to a winger closer to the opponents area, is the only way to get the best out of him. Sometimes he impresses when he gets into those advanced positions, ready to swing the ball in for Kane et al.

COACHING
Spurs’ glaring problems over the past 12-18 months has been the defence, we know this, but the crux of the issue at hand is to not to have a proper defensive midfielder to shield the backline. This has exacerbated the problem further.

How many matches can you think of in the past 18 months where we have conceded the first goal, or we concede from an individual error? Avoidable comical goals that became an unwanted regularity. A dodgy defence that undermines all the good effort the attacking players put in to score our goals.

It is obvious what Mourinho and his coaching team have been working on at the training ground with the squad during shutdown. Mourinho will further address the issues with the defence in the summer transfer window.
A new right back, who is capable of defending (because how the hell doesn’t one know how to defend with composed positioning), is imperative as Aurier needs the competition. The left back position is covered by the reliable Ben Davies and Ryan Sessegnon, who is still young and raw.

For CB’s; there is Dier, Sanchez, Toby, Jan and Tanganga. We need to sign another new and experienced centre back once Jan departs. To complement the defence, a DM remains essential. With a DM sitting in front of the defence, the attacking midfielders can roam further up the pitch close to Kane and not always have to worry about tracking back to defend.

I was never worried about our attacking prowess. The high calibre attacking players we have, scoring goals and creating goals will not be a problem. The better the defence gets, the more the midfield will create.
The lack of creativity right now is because the creative players are dropping back to help the defence. Better to have the likes of Son, Lo Celso and Bergwijn in advanced attacking positions supporting Kane, rather than to have them so deep defending and killing any chance we have of scoring goals.

Hence, signing a DM is imperative and should be the main priority.

The more matches this defence plays together, the more confident, composed and compact they will become. The remaining seven matches will give us a clear indication of this.

FOUNDATION
Mourinho has built his previous teams from a solid defensive foundation. I am confident, the more he sprinkles his magic on the defensive process the more organised and obstinate we will become. Slowly, but eventually we will start to look like a proper competitive team again.

A Jose Mourinho team. Hopefully, a winning team. Not sure just how much style we’ll have though.

I did wonder during shutdown what the team will be like when the matches resumed. They appear to be now functioning like a Mourinho team. His ideas and methods are taking shape. It isn’t exciting but if the defence and midfield clicks, the scoring goals bit should keep us entertained. As long as we aim for more than a single goal per game.

If we keep showing improvement over the remaining matches and take that into the short pre-season, with the key additions, then I am confident enough to say that we will compete for the PL title while Mourinho is still here. Why not? We got the manager, we got the best striker in Europe. All we need is the winning mentality. And that DM. Jose seems to believe this is possible. It might be far fetched, he might be lost in his own rebranding and PR…but our managers pedigree has to allow for some ilk of faith.

Mourinho will instil that winning mentality. Afterall, that’s why we appointed him.

SAME AGAIN
On to Sheffield United for the next match. I am hoping to see more of the same, in terms of defence and a win, obviously. If we can improve and defend well, like we did in the previous two matches, then I think we will beat Sheffield.

All we want to see is the team making significant progress. Use these remaining matches to continue to understand how Mourinho football works. The players. I think we all know how it should work, as sofa spectators. Whether we can enjoy the football in the same way we did under Poch at his best, is altogether a different question.

Finish the season strongly and lets see where we end up.

There is the danger that Spurs might not even play European football next season. We currently sit in 7th spot on 45 points. 9 points away from 4th. Wolves and Man Utd occupy the Europa spots. This does not mean it is all doom and gloom again.

Not playing any European football for one season might be a good thing for the team. Daniel Levy might disagree. It will give them a clear run at the League title without the mid-week match interference. And Jose was fairly confident (blagging) that doing so was possible.

Hopefully, with the right signings in the right positions, we will have a team ready to compete again on all levels.

The season might have been null and void; it isn’t. So call this a pre-pre-season that might help us long term.

COME ON YOU SPURS