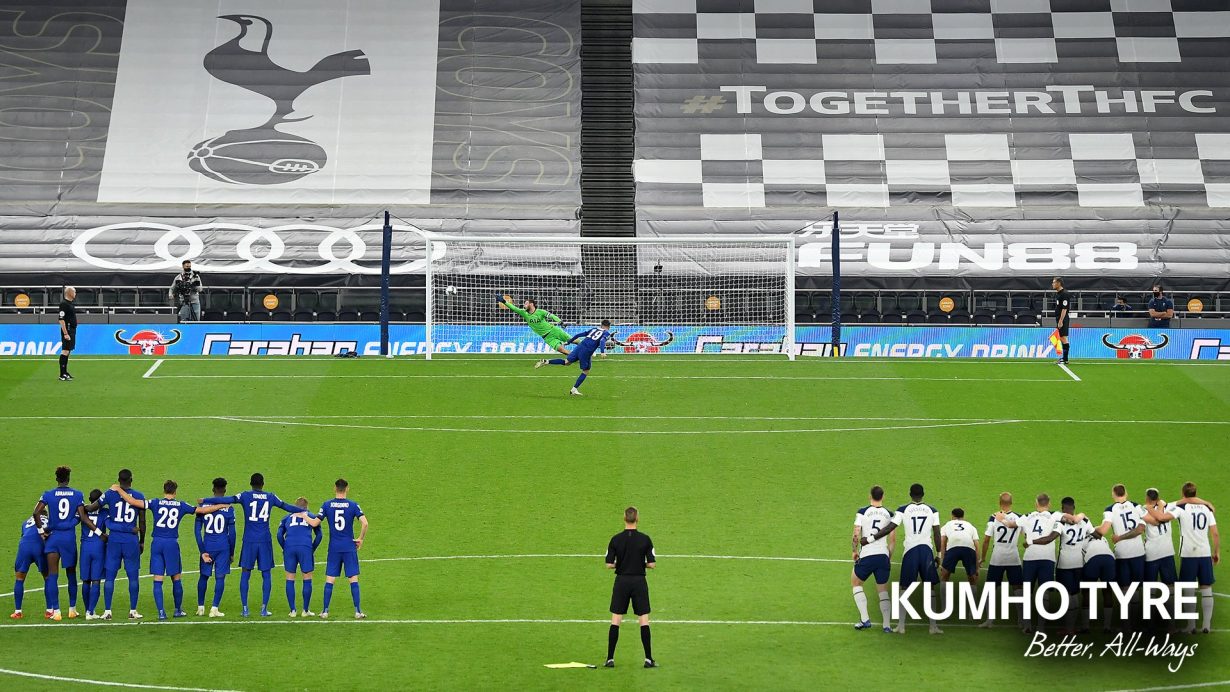 Spurs advanced to the quarter-finals of the Carabeo Cup with a penalty shoot-out victory over Chelsea at Tottenham Hotspur Stadium.

Chelsea’s Mason Mount missed the decisive spot-kick io settle this memorable contest. It was a tie notable for a heated touchline exchange between Jose Mourinho and Frank Lampard as well as a mid-match sprint for the toilet to answer nature’s call by Eric Dier.

Chelsea selected a strong side which included a debut for new goalkeeper Edouard Mendy. Jose Mourinho, by contrast, was forced to rotate his squad in an attempt to manage a ridiculous fixture list which currently has Spurs playing three games a week.

Unsurprisingly Chelsea quickly seized the initiative. Kovacic and Jorginho dominated the midfield in the opening 15 minutes, forcing the overworked Spurs defence to sit deep. With a make-shift front-two of Erik Lamela and Steven Bergwijn, the home side struggled to get up the pitch. There was an air of inevitability about Timo Werner’s 19th-minute goal to give Chelsea the lead. It was the German international’s first for the Stamford Bridge club. Chelsea seized on a loose pass just inside the Spurs half.

Hudson-Odoi fed Cesar Azpilicueta down the right, who cut a ball back to Werner, lurking on the edge of the Tottenham box. As Tottenham’s packed defence converged upon him, Werner instantly brought the ball under control before flashing a low shot through Tanguy Ndombele’s legs and into the corner of the net. Given their abundance of possession, Frank Lampard will have felt his side should have extended their lead in the remainder of the first half.

If Jose Mourinho’s team selection suggested a willingness to sacrifice this competition in the quest for loftier trophies, it didn’t dampen his passion on the touchline. The Portuguese took his former talisman Lampard to task for the way the Chelsea boss conducted himself after the Blues took the lead. Lampard, wearing combat trousers, is fast growing a reputation as an abrasive presence in the dugout. Referencing Chelsea’s comeback against West Brom last weekend Mourinho said: “F*****g hell Frank when you’re losing three-nil you’re not standing up here.”

Tottenham appeared inspired by their manager’s example in the second half. Sissoko and NDombele were quicker to press and began to establish good possession for their side in the Chelsea half. Sergio Reguilon, making his Spurs bow, was a growing influence on the left-wing as the second half developed. First, meeting a low Serge Aurier centre, he drew a smart save from Mendy. Then the Spaniard flung himself full length to send a diving header wide of the Chelsea goal.

With Tottenham piling forward in search of an equaliser, Chelsea showed menace on the break. Hudson-Odoi, in particular, threatened to take advantage of the space left behind by the Spurs defence. The gaps became a chasm when Eric Dier suddenly burst from the pitch and headed for the tunnel. In a bizarre scene, a gesticulating Mourinho followed his defender into the Spurs dressing room. Hopefully, Dier remembered to lock the cubicle door. With impressive speed, Dier was back on the pitch and bolstered by the introductions of Harry Kane and Lucas Moura Spurs forced the issue.

The equaliser they deserved arrived in the 83rd-minute. Reguilon was the creator. The left wing-back’s cross eluded Harry Kane and Kurt Zouma, before falling at the feet of Erik Lamela. The Argentine swiftly adjusted his feet to slot the ball home.

Neither side was able to fashion a clear-cut opportunity in the final minutes, and with no extra-time being played in the Carabao Cup the tie headed to penalties. Spurs have an unenviable record in shoot-outs having been beaten in their last three. The north-Londoners lost to Chelsea on penalties in the 2019 Carabao Cup semi-final and exited both domestic cups via spot-kicks last season. Eric Dier held his nerve (and stomach) to convert first for Spurs. Tammy Abraham levelled for the Blues. Both teams were impeccable with their next three efforts, effectively making the fifth penalty sudden-death.

Harry Kane clinically sent Mendy the wrong way to put Spurs 5-4 ahead, leaving Mason Mount to step up knowing he must score. The England midfielder’s shot clipped the outside of Hugo Lloris’s post on its way wide, prompting a joyous dash from the Spurs players stationed on the halfway to celebrate with their keeper.

Given their relentless run of fixtures Spurs can be forgiven for not knowing which competition they are playing in from one match to the next currently. On Thursday night when the Carabao Cup quarter-final is drawn, they will be facing Maccabi Haifa for a place in the Europa League group stage. Once Jose Mourinho has had a chance to take stock he will realise Spurs are now only three games from Wembley and a chance to win the club a first trophy since 2008.