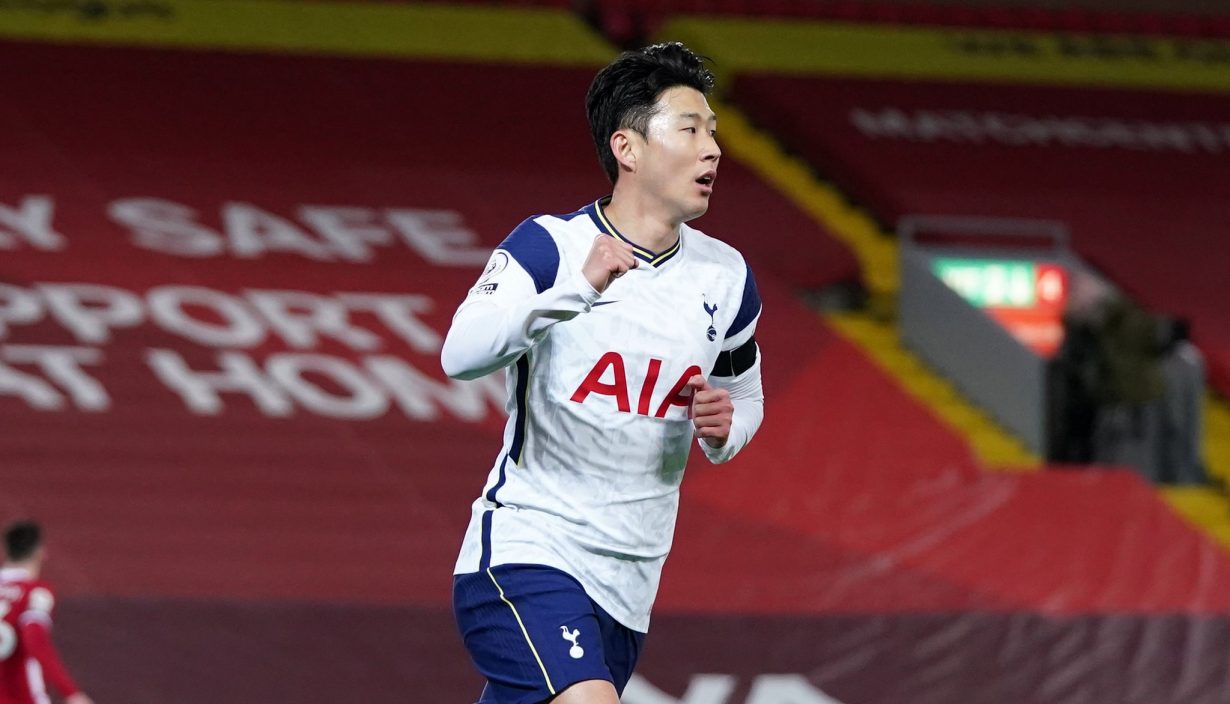 It was a harsh lesson for Spurs about the realities of what is required in chasing down a title.

A last-gasp winner from Roberto Firmino saw Spurs relinquish their lead of the Premier League to Liverpool. The Brazilian’s decisive intervention came after Steven Bergwijn and Harry Kane had spurned glorious opportunities to put Spurs ahead in the match. Jose Mourinho was left to ponder what might have been in a game that felt every inch a title showdown between the two principal contenders.

Recognising Liverpool’s threat from wide, Mourinho reshaped the side that had navigated Spurs through a testing run of fixtures with an impressive return of points. Sissoko and BergwiJn were deployed wide in midfield to block the Anfield avenues that Robertson and Trent Alexander- Arnold often find so productive. Ben Davies was also preferred to Reguilon in the Tottenham manager’s quest for solidity.

Given that coming into the match the Merseysiders boasted a record of 65 unbeaten at home in the league, Mourinho’s caution was well-founded.

Liverpool did not disappoint. Immediately the champions began to asphyxiate Tottenham with their relentless possession. Whenever the Spurs defence won the ball, their heads were immediately plunged back underwater by the home side’s ferocious press. With no way out, Tottenham soon began to concede chances. Lloris saved after Firmino met Robertson’s freekick. Fabinho’s long pass saw Salah spin Dier – the ball appearing to brush the big defender’s arm – before Alderweireld’s covering challenge snuffed out the danger. The Egyptian then failed to connect cleanly with Robertson’s cutback to the penalty spot, allowing Lloris to make another save.

That Spurs managed to stall the Liverpool breakthrough until the 26th minute was a testament to the belief the players have in Mourinho’s tactical gameplan. And even then they were undone by ill-fortune. The impressive Curtis Jones burst into the Tottenham area where he was challenged by Serge Aurier. The ball broke loose to Salah whose shot span off Toby Alderweireld as he tried to block, before looping excruciatingly into the top corner of Lloris’s net.

There was no let up after the goal, Kane and Son, the most advanced players in a white shirt, were reduced to trying to plug holes five yards outside their own box as the vibrant Reds pushed and pushed. But then just after the half-hour mark, without prior warning, Spurs produced the best piece of football in the match. Lo Celso – preferred here to Ndombele for his greater discipline in a two-man central midfield – surged forward with the ball from deep.

As Henderson and Jones confronted him, the Argentine threaded a magnificent pass with the outside of his left boot to set Son away. The South Korean opened his body as if to curl the ball for the far corner before whipping it into Alisson’s near post. Son’s 11th Premier League goal of the season not only restored parity in the match but also drew him even with Salah in the race for the golden boot.

Having reached half-time level, Mourinho reconfigured his line up – Sissoko was moved infield with Lo Celso pushing out to the right. The adjustment immediately gave Spurs more of a foothold in the game. Within seconds of the restart, Tottenham should have taken the lead. Alderweireld’s long diagonal pass was misjudged badly by Williams allowing the beavering Bergwijn a run at goal. The Dutchman, who has won a place in Mourinho’s side through dint of effort, is yet to open his league account this season. Faced by Alisson, he failed to even hit the target, mistiming his shot so that it skewed horribly wide.

Alisson then presented Harry Kane with a chance, as the Brazilian keeper ventured outside his box and attempted a skimming pass to the wing. Kane lunged to intercept the ball and smartly sent a left-foot chip back over the Brazilian keeper. Alisson recovered quickly enough to divert the ball behind for a corner.

From being totally overwhelmed in the first half, the game suddenly appeared there for Spurs to win.

A long punt from Lloris was flicked on first by Kane and then by Son, again setting Bergwijn through. This time he steadied himself before bending a shot across Alisson. Bergwijn was desperately unlucky to see his effort rebound off the post. Moments later Harry Kane somehow failed to head home a Son corner despite being unchallenged four yards from goal. Mourinho’s exasperation on the sidelines told of a manager who knew full well what tends to happen in potentially season-defining games like these when the contender misses a chance to lay one on the champ.

Liverpool galvanised by these lucky escapes found their first-half rhythm again. Jones seized on Kane’s untidy touch on the half-way line to release Salah in the right channel. Lloris, who had a good night for Spurs, was equal to the forwards shot.

On the other side of the pitch, Aurier and Mane were having a tremendous battle with Aurier coming out on top against arguably the best player in Europe over the past 12 months. Even when for once the Senegal star managed to escape Aurier’s attentions, rolling away to latch on to Robertson’s pass, the defender got back in to deflect Mane’s shot onto the bar.

With fifteen minutes to play, Mourinho decided to batten down the hatches. Reguilon replaced Bergwijn, and then Son was withdrawn for Dele Alli. Spurs looked like they had done enough to leave Anfield with the point that would keep them top of the table, albeit on goal difference. But then Mane had one last run at Aurier which saw the ball go out for a corner. As Robertson sent over his outswinging cross, Firmino eased Alderweireld out of the way and planted a thumping corner into the top corner. With Son off the pitch and little time remaining, there was no chance of a comeback.

It was a harsh lesson for Spurs about the realities of what is required in chasing down a title. Judging by the passive-aggressive exchange between Mourinho and Klopp at the full-time whistle, however, it doesn’t appear the Tottenham manager is willing to concede the race just yet.