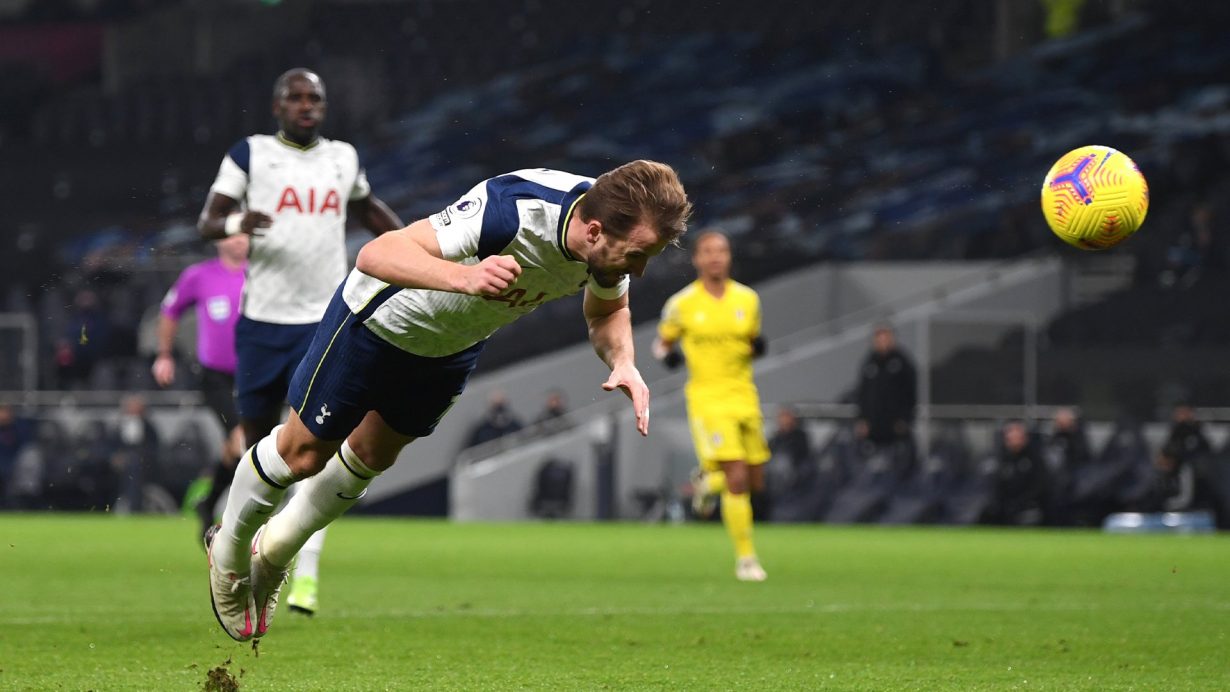 The incredulous look on Kane's face - as his header flashed over the bar rather than into the net - suggested it was a chance he thought he should have buried.

Ivan Cavaleiro’s 74th-minute equaliser cancelled out a Harry Kane first-half header as Tottenham yet again squandered a winning position in the Premier League. It is the fifth time this season already that Jose Mourinho’s side have failed to capitalise on half-time leads. It is a troubling habit that has all but extinguished any prospect of a title challenge. And now leaves Spurs in a real scrap to secure Champions League football for next season.

The North Londoners will be all the more disappointed at the result given that this was a match Fulham were vehemently opposed to playing. Scott Parker had complained bitterly at the Premier League’s decision to parachute his side into the gap in Tottenham’s fixture list created by the postponement of their game with Covid afflicted Aston Villa.

Fulham, who themselves hadn’t played a league game in 18 days following positive Covid tests, started this match brightly. Ruben Loftus-Cheek cut a menacing figure in the early exchanges roaming between the Tottenham midfield and defence, troubling both. Fulham registered the first effort on target after a foul on the England man resulted in a free-kick. Cavaleiro’s delivery found its way to Adarabioyo who flicked the ball goalwards but without sufficient pace to worry Lloris.

Tottenham were quick to wrest the initiative from the visitors as Ndombele exerted his influence on the match. With seven minutes played, the Frenchman’s clever footwork drew a foul deep in Fulham territory. Hojbjerg took the free-kick instantly, setting Serge Aurier away on the right of the Fulham box. The Ivorian pulled the ball back to the penalty spot where Reguilon arrived to meet it. His first-time effort was blocked, but the rebound fell invitingly for the Spaniard to try again. Leaning back and on his weaker right foot, Reguilon sent the ball high over the crossbar when he should have scored.

Ten minutes later Ndombele again broke the Fulham lines, skipping beyond Robinson, having tempted him away from his defensive berth. The midfielder fed the marauding Aurier, who picked out Son with a low cross to the near post. Son’s touch looked destined for the net until Alphonse Areola made a sharp save with his right leg. Minutes later the Fulham keeper thwarted Son again, flying across his goal to keep out the Korean’s header from Ndombele’s cross.

Areola, however, was powerless to stop Tottenham taking the lead from their very next attack. Hojbjerg collected the ball on the edge of his own area before spraying a magnificent crossfield pass to the buccaneering Reguilon. The left-back’s immaculate first-touch afforded him the time needed to raise his head and spot Harry Kane’s run. The England captain plunged to meet Reguilon’s gorgeous cross, thumping his header home off the inside of the post.

With half an hour played Kane missed a glorious chance to double his tally. Robinson, tormented by Ndombele surrendered possession in a dangerous position. Seizing on the mistake, Ndombele released Aurier with a measured pass. The full-back whipped his cross to the near post in search of the striker.

The incredulous look on Kane’s face – as his header flashed over the bar rather than into the net – suggested it was a chance he thought he should have buried.

Fortunate to still be in the game Fulham rallied before half-time, and Loftus-Cheek was inevitably their bright spark. Sweeping the ball wide to Kenny Tete on the right-wing, he burst into the box seeking a return pass. Tete’s delivery was slightly behind the midfielder, but improvising with an agile scissor-kick, Loftus Cheek sent a shot narrowly wide of Lloris’s far post. Had it been on target the Tottenham keeper would not have reached it.

Following the surrender of half-time leads against Newcastle, West Ham, Crystal Palace and Wolves – Jose Mourinho has felt compelled to lay responsibility squarely with his team. Rather than any defensive diktats from the dugout, he said, the players’ failure to create and take chances in the second halves of these matches was what had cost Spurs.

Cutting an increasingly agitated – and animated – figure on the edge of his technical area after the interval here, it was clear the Portuguese feared history was in danger of repeating. With just over an hour played Fulham had taken control of possession. But it was with the introduction of Ademola Lookman from the bench soon after, that the game swung decisively in their favour.

Before the former Everton man could make his game-changing intervention, however, Spurs should have sealed the points. Ndombele, disappointingly peripheral in the second half, slipped Son through – who had himself barely had a kick since the break. Such has the forward’s form for finishing been of late, it seemed inevitable his sprint on goal would conclude with him finding the net. At the critical moment, however, Tottenham’s marksman erred scuffing his left foot shot across Areola. The ball hit the post before bouncing back into the arms of the grateful Fulham keeper. It proved a costly miss. Three minutes later, Fulham were level.

Lookman dashed down the left-wing, engineering the yard he needed to escape Sanchez and chisel out a left-foot cross towards the penalty spot. The ball dropped between Dier and Reguilon where Ivan Cavaleiro was on hand to power home with his head.

Spurs under Mourinho are yet to convince that they can hunt down a victory in these circumstances. Mourinho’s near two decades at the top of the game show he has little appetite for that way of playing. Even here against lowly Fulham, with Spurs in desperate need of a win to stay in touch at the top, Hojbjerg and Sissoko remained on the pitch for the duration. While, in a stadium where the words ‘To Dare Is To Do’ are omnipresent, Gareth Bale, Dele Alli and Lucas Moura all sat kicking their heels on the bench.

Instead, it was Fulham whose brave football was almost rewarded with victory. First Lloris made a fine smothering save from Loftus-Cheek who had been played in by the lively Lookman. Then, inexplicably, Aboubakar Kamara declined to look up and play in Lookman for what would have been a clear run on Lloris’s goal.

At the death, Spurs did mount one final attack that for a moment Mourinho thought had brought his side a winner. Substitute Lamela forced the ball through to Son on the left of the area, who squared for Reguilon to fire home. The offside flag, correctly raised, choked the Tottenham manager’s celebrations before they had left his throat.

Having won just one of their last six in the Premier League, Spurs now travel to bottom of the table Sheffield United on Sunday. Nothing but victory there will do.