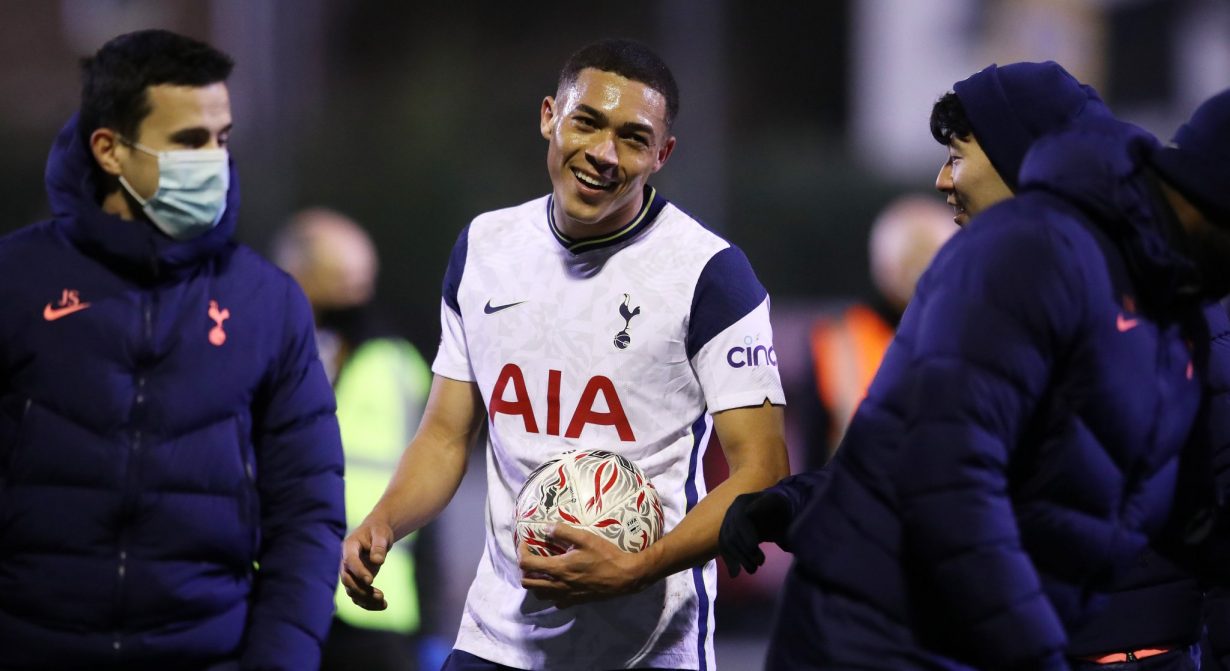 5-0 doesn't tell the entire story, however. With the North Londoners monopolising possession in the first twenty minutes but failing to find a way through the massed Marine ranks, the FA Cup almost worked its unique brand of magic.

Tottenham breezed into the FA Cup Fourth Round – and disappointed the nation – with an emphatic 5-0 win over eighth tier Marine.

While the tie provided many of the classic contrasts that make FA Cup Third Round weekend one of the most engaging dates in British sport, Jose Mourinho’s team selection ensured a shock was never a realistic prospect.

PE teachers, supermarket workers and binmen vying with World Cup thoroughbreds on a pitch more Sunday League than Champions League was the feel-good story the nation needed at the end of another horrific week in pandemic Britain. Tottenham’s task was to show due deference to the occasion and Marine’s sensational seven-match run to reach this stage, without facilitating a fairytale. Mourinho’s side struck the perfect balance.

5-0 doesn’t tell the entire story, however. With the North Londoners monopolising possession in the first twenty minutes but failing to find a way through the massed Marine ranks, the FA Cup almost worked its unique brand of magic.

A clearance by the home side broke the way of Neil Kengni just inside his own half. Completely isolated, the trainee plumber surged towards the Tottenham area with the ball. Harvey White and Toby Alderweireld backed off reasoning Kengni unlikely to trouble Joe Hart from 30 yards. The Marine forward optimistically accepted the invitation, lashing a left-foot shot that began dipping at the very moment Hart had pulled his hand away having assumed the strike would clear the crossbar. It was the sort of lapse in judgement that has blighted Hart’s career in recent years. The sound of the ball thudding off the woodwork behind him had the panicked former England number one racing back to tip the ball to safety.

It was the hope that killed Marine. Seduced by this nearest of misses, the disciplined part-timers now began to allow spaces to appear in their box. Dele Alli – the game’s outstanding player – picked up the ball in the inside-left position and exchanged passes with the lesser-seen Gedson Fernandes. Having engineered the yard he needed, Alli took the return pass and delivered an inch-perfect cross, smuggled through the Marine rearguard to the back post, where the unmarked Vinicius stood no more than three yards from goal. The Brazilian waved an uncertain foot at the ball, failing to make sufficient contact to propel it across the line. Fortuitously it dropped at his feet, and with a quick shimmy to beat the keeper, the striker stood free on the goal line to lash home the opener.

Alli was visibly enjoying himself now. Six minutes later, again taking up positions that would challenge even elite defences, he shaped a sumptuous curling pass across the box to the onrushing Doherty. The Irish full-back met it on the stretch with a side-foot volley which drew a smart reflex save from Bayleigh Passant in the Marine goal. Unfortunately for the keeper, Vinicius’s reactions were just as sharp, as the striker seized on the rebound to blast the ball into the gaping net. Perhaps a little bashfully – given that his brace of goals had come from a combined total of three yards – this time, the forward spared those Marine fans watching on from vantage points in their back gardens his trademark folded arms celebration.

With the suspension of non-League football following the winter surge of Coronavirus, Marine’s last action came on Boxing Day. As a result, the home side looked increasingly fatigued. Spurs won a string of free-kicks within shooting range as desperate challenges reigned in on the nimble Alli and Moura. Harvey White, who has forged quite a reputation for his potency from dead balls in the Spurs Under-23 ranks, fired one effort into the wall, before stepping aside to let Moura line up the next. With just over half an hour played, the winger stroked the ball over the Marine barricade and into the top corner from 25 yards. Tottenham had extended their lead to three.

It was now a case of how many Spurs would score. Eight minutes before half-time the swaggering Alli again seized the initiative on the edge of Marine’s area. The England man pushed the ball into White, looking for a one-two. White was dispossessed, but the ball spilt out to the penalty spot where it pinballed off the shins of two weary Marine defenders before popping up to Vinicius. The striker finessed a half-volley into the top corner, completing his quickfire hat-trick and giving Spurs their fourth.

Marine were relieved to make it to half-time without sustaining further damage. With the job done, Jose Mourinho replaced Sissoko and Alderweireld – the bonafide first-teamers in his side – with Japhet Tanganga and Alfie Devine. The latter becoming Tottenham’s youngest player in the process. Devine would mark the occasion in some style before the night was out.

Keen to avoid humiliation, Marine inserted some aggression into their performance at the start of the second half. Dele Alli’s teasing feet elicited a late tackle from robust captain Niall Cummins. The pair squared up momentarily. While the potential for a physical confrontation quickly dissipated the verbal exchanges did not. Alli spent the remainder of his time on the pitch looking to dribble past all comers. Of course, the honest but limited nature of the opposition here means Alli will not have transformed his manager’s opinion with this one performance. But his imaginative passing and deft touch – including one outrageous nutmeg – served to remind just what a rare talent he is.

That a manager of Mourinho’s pedigree is yet to find a way of accommodating Alli in his strongest side remains a severe blemish on the Portuguese’s Tottenham tenure.

Spurs fifth and final goal arrived on the hour mark. Lucas Moura’s adroit backheel delivered the ball to Devine in the box. The youngster committed two defenders before rapping in a low drive which squeezed just inside Passant’s near post. The delight on 16-year-old Devine’s face will have perhaps provided some succour for the millions who had tuned in hoping for a giant-killing. In short order, Alli left the field with a smile as Mourinho afforded the Marine players a chance to rub shoulders with Gareth Bale.

It was a nice touch from the Tottenham manager and reflected the warmth of feeling between the two clubs which had seen Spurs fans buy most of the 30,000 virtual tickets for the match. It is money that hopefully should see Marine through these bleakest of times for non-League football. That’s the FA Cup’s real magic, and it’s alive and well.