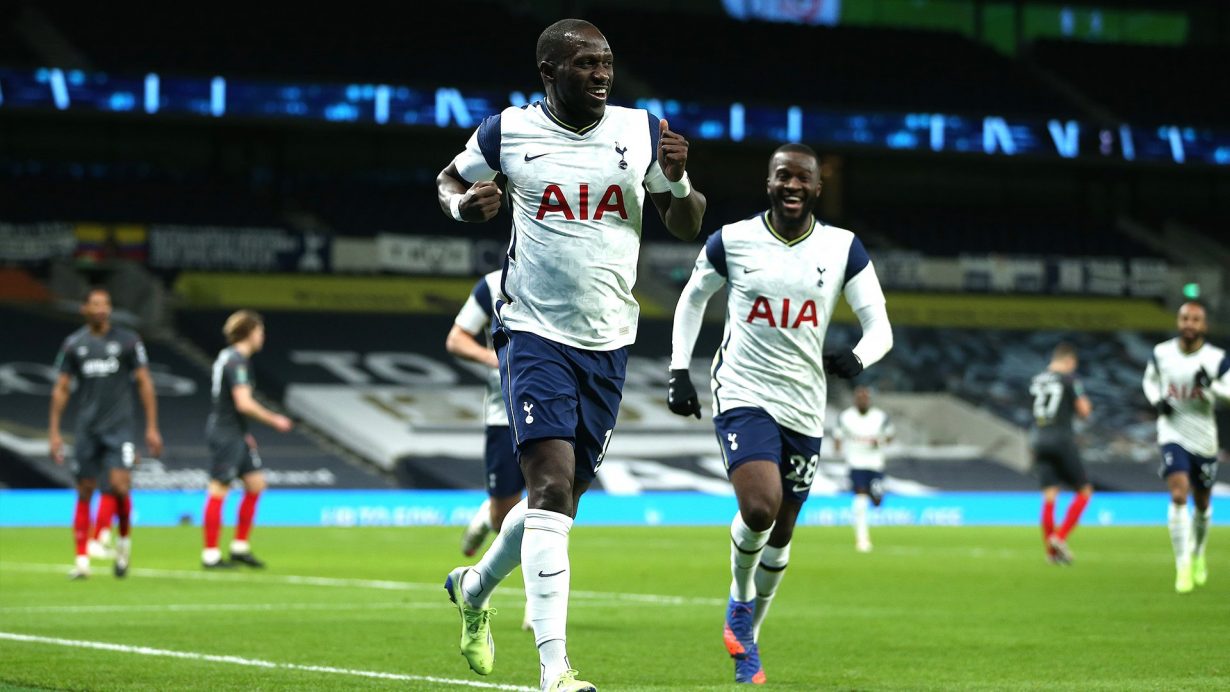 And so in this strangest of seasons, Tottenham have navigated their unconventional road to Wembley via three games played in empty stadiums, bereft of the atmosphere that makes cup football special.

Tottenham eased past Brentford into the Carabao Cup final thanks to goals from Moussa Sissoko and Heung-min Son. In his first full season with the club, Jose Mourinho is now one win away from ending Spurs’ 13-year wait for silverware.

Ahead of kick-off, the Tottenham manager described this match as the biggest to date in his Tottenham tenure. His selection of Son and Kane to lead the line reinforced the rhetoric. Tottenham started the game brightly advancing down the flanks with the recalled Aurier and Reguilon seeing plenty of the ball. Following the formers penalty box indiscretion against Leicester and the latter’s Christmas Covid infraction both looked keen to make amends.

With 12 minutes played Dier skimmed a ball out to the Spanish left-back who sent a teasing cross towards the penalty spot. The precision of the delivery bypassed both Brentford centre-backs and found the immaculately timed run of Moussa Sissoko. The Frenchman, whose last goal came over a year ago, guided his header unerringly beyond David Raya’s dive into the top corner of the net.

With Mourinho’s Tottenham, early goals can be a curse as well as a blessing. Points have been dropped recently when the team has ceased attacking altogether in ultimately doomed attempts to hold onto quickly established first-half leads. Here though the home side tried to press home their advantage. Moments after scoring Kane and Moura combined, allowing the Brazilian to tee up Son for a shot on the edge of the box. The Korean’s attempt to feed the ball into the far corner curled too close to Raya who saved well.

Son’s next significant contribution to the match came at the other end of the pitch as he hurled himself to make a goal-saving block from Josh Da Silva’s fierce drive.

It was a rare moment of anxiety for Tottenham who encountered a Brentford side inhibited by a desire not to concede a second goal before half-time. Raya’s brilliant save five minutes from the interval saw the visitors reach their modest target. Son’s inswinging corner to the near post flicked off Moura’s head and then that of his marker Ivan Toney, forcing the Spanish keeper to dive backwards and propel the ball away to safety from beneath his own crossbar.

Refusing to allow their first-ever cup semi-final appearance to pass them by, Brentford emerged for the second half a team transformed. Three minutes after the restart Bryan Mbuemo skipped past Davinson Sanchez in the Tottenham box. Showing admirable honesty – and perhaps a little naivety – in eschewing the chance to go down under the Colombian’s challenge, the forward squared to Toney for what looked a tap in. Instead, though Serge Aurier threw himself at the ball and made a smothering block.

Aurier immediately dashed down the right-wing to connect with Lucas Moura and burst into the Brentford box. With his pulse doubtless still racing following his defensive heroics, the Ivorian sent a wild shot high over the crossbar from six yards.

With an hour played Brentford aimed a long throw into the Tottenham area. The otherwise excellent Sissoko unwittingly provided the perfect flick on forcing a panicked Reguilon to shin the ball over his own goal at the expense of a corner. The resulting kick found Ethan Pinnock in space at the far post, who headed the ball across the six-yard box for Toney to divert home. Fortunately for Tottenham VAR – which has not been used in the previous rounds of the Carabao Cup – showed that Toney was offside by barely a knee-cap’s width.

This fright galvanised Spurs and in the 69th minute, the home side launched a blistering counter-attack that settled the match. Reguilon won the ball in the left-back position and immediately picked out Kane on the halfway line. The England skipper threaded the ball to Ndombele who, in turn, dissected the Bees rearguard with a through ball for the darting Son. Given the confidence with which Son is currently playing the outcome was all but academic. A powerful shot reversed back across Raya left the keeper with no chance.

Mourinho wasted no time in replacing Reguilon and Moura with the more conservative Davies and Winks. Despite this decision to pull up the drawbridge, Ndombele almost added a third, hitting the post from an acute angle.

With the match petering out, former Woolwich youngster Da Silva decided to leave his mark on the proceedings – and more specifically Pierre-Emile Hojbjerg – with a horrific tackle. Referee Mike Dean initially allowed play to continue but as Hojbjerg lay prone word came through to the official that the tackle warranted an urgent review. Da Silva was dismissed. The replays showed that Hojbjerg was lucky to escape with ‘just’ a nasty eight-inch gash on his shin. Given Hojbjerg’s fury at the tackle, still visible as he marched down the tunnel following his substitution, Da Silva will have done well to escape with just a red card.

And so in this strangest of seasons, Tottenham have navigated their unconventional road to Wembley via three games played in empty stadiums, bereft of the atmosphere that makes cup football special. Make no mistake though, if Hugo Lloris lifts the trophy in April, it will be a triumph that is celebrated in Spurs lore just as fondly as all the rest.