Unlike most forums, we don't have a particular set of rules apart from the standard forum rules. Our moderators will move threads, delete spam and deal with those weird fans of other clubs who like to register at rival teams forums.

We prefer to allow the forum to self-moderate though the Fouls system. If you have an issue with a particular user or some content you can also use the ignore user feature (see below).

Users can anonymously vote for other users to receive a red card and be "sent off" from the forum.
How it works:
When a user has received X amount of votes from different users within a time frame, they will be suspended for X amount of days.

The length of suspension can vary depending on:
If you are sent off, you can see when you will be released on the 'Warnings' tab on your profile page.

If someone who has been sent off creates a new account, they are automatically banned.

Users who are continually sent off may be permanently banned.

Reasons for voting for someone to be sent off may include:
We check the votes and decide if a vote is valid.

Voting for someone that you simply have a disagreement with is not a valid reason and the vote will likely be deleted.

People who continue to submit votes that are not valid will have their voting permissions removed.

You can ignore users. Click on their picture and then 'Ignore' in the pop-up box. All their posts will now be hidden from you.

At the bottom of a thread there is a link to 'Show Ignored Content' if you would like to view posts from any users you have on ignore in that thread.
Last edited by a moderator: 9 Apr 2019

You can use standard emojis from your phone keyboard etc. They are converted to EmojiOne once posted so there's no iOS/Android differences with how they display.
You can also access them all from the smiley drop-down in the editor.

Prefixes are used to group threads around a certain topic. You are require to select one when creating a new thread. Let us know if you feel we're missing any options.

Visit your account preferences on a compatible device and you can enable Push Notifications. So you can get forum alerts instantly pushed to your phone/browser.


This is supported by most major browsers except Safari on macOS and any browser on iOS. Basically, if you've got an iPhone it won't work because Apple have (so far) refused to embrace the industry standard.

This has been improved and should display much better from mobile to desktop. See the formation thread here.

In the post editor (under the 'Insert' drop-down) there is a Giphy button to help you post those all-important reaction gifs.

There's a little bookmark icon in the top right of posts so you can save any to your account for future reference.
Last edited: 9 Apr 2019
Comment

If the image is already on the internet, you can copy the image address (location) and then paste this into the 'Insert image' option in the post editor to add the image to your post.

We don't allow images to be uploaded to the site. If you wish to add your own images, you will need to upload them first to a site such as Imgur 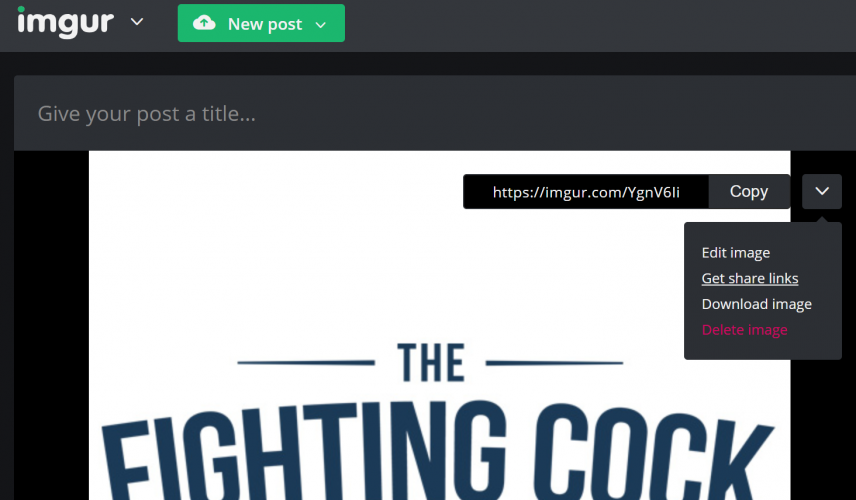 In the Share Options popup, you can copy and paste the BBCode (Forums) code directly into the post box here.