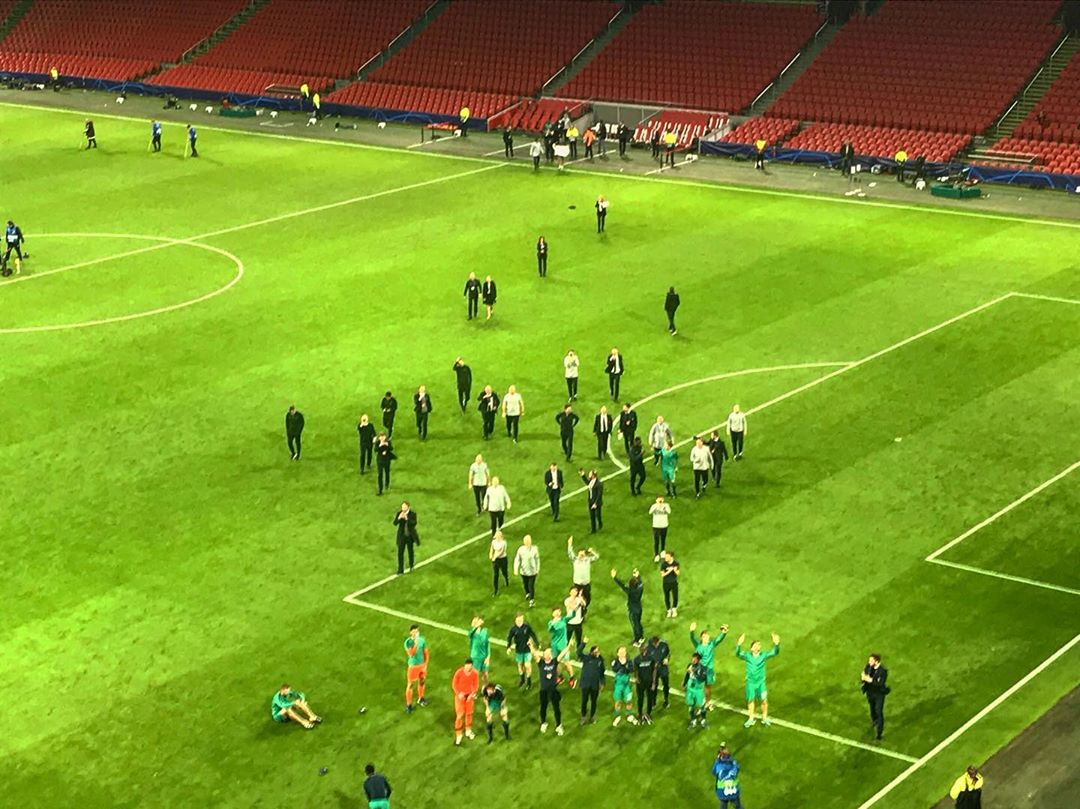 The night is at its darkest just before the dawn. And the sun was setting on Tottenham’s European dream after only 35 minutes played. A flimsical Kieran Trippier was ousted out of possession by Donny van de Beek, the Dutchman feeding Tadic who in turn found Ziyech. The Moroccan wrapped his left foot sweetly around the ball and into the far corner of Hugo Lloris’ goal. Ajax were scintillating, soaring, sublime; Tottenham, downbeat and dejected, were now sinking into the depths of desolation. But even in this darkest half-hour one thing refused to be extinguished — belief.

Mauricio Pochettino is big on “universal energy” — a flowing force that exists in our physical, emotional, and spiritual bodies; it is something that powers our entire existence and reveals itself at the most unlikely times. It is something any Spurs fan of the modern era would have certainly called bullsh*t on until this whirlwind of a European tour.

For at times it’s seemed that the Footballing Gods have been unified against us, each Spurs fan wondering what ills they had committed in a past life to warrant the way of the world treating our Champions League journey thus far like an episode of Punk’d: Lasagna-gate, Young Boys on the astro turf, Crouch sent off in Madrid, 10-man Chelsea win in Barcelona, Drogba in Munich, third behind Monaco and Leverkusen, Chiellini’s “The History of Tottenham” speech, bottom of the group after three games, having to get a result at the Nou Camp — have I missed anything?

But then something changed, by God something changed. With a flick off the hip and a nick off Bernardo Silva the tide turned. This universal energy so highly valued by Pochettino must have been keeping receipts, and now it was calling in the loan. Having incessantly been on the wrong end of dramatic results like that night at the Etihad, we all ponded in disbelief: how had Tottenham played in one of the greatest European games off all-time and emerged triumphant?

This universal energy so highly valued by Pochettino must have been keeping receipts, and now it was calling in the loan.

Spursy, Typical Tottenham, bottlejobs, “Lads, it’s Spurs” — those demons, I’m afraid to admit, will never be laid to rest despite the madness in Manchester and our heroics in Holland. For whenever Spurs are to fail from heron in — and it’s only human that they do — those detraction’s will always be around the corner. But who cares?

The fact that before beating Ajax in a Champions League semi-final Spurs lost in the last minute to Bournemouth after holding on with nine men for an entire half is Typical Tottenham. That they had only scored one goal in their last eight hours and 32 minutes of football prior to scoring three in 35 minutes in Amsterdam isTypical Tottenham. That after losing seven of their last eight away games before Ajax, they then became only the second team in Champions League history to lose the first leg of the semi-final at home and progress isTypical Tottenham.

Maybe part of the reason why we’re all so enamoured with this football club is because it is completely bat-sh*t crazy, and there’s nothing we can do but let it take us on a roller-coaster ride that adds exhilaration and hope to our mundane, everyday lives.

Wednesday night proved glory, glory nights don’t have to end with us lifting silverware aloft. Contrary to popular belief, football isn’t all about winning trophies — it’s about entertaining, enthralling, and doing things in style and with a flourish. It’s not played by machines but by 11 men who, like everyone in life, experience dizzying highs and wallowing lows; who make mistakes and hope to rectify them — except these heroes are only given 90 minutes to do as much.

So this is what Tottenham are: a team that proves football, just like life, isn’t an immaculate path that takes your from A to B in a neat, straight line. It’s a team harnessed by belief. It’s a team in a Champions League final without its best player. It’s a team powered by a man once considered Spurs’ worst-ever signing. It’s a team spearheaded by a player deemed unworthy by PSG. It’s a team managed by a marvellous man who cries with joy in his post-match interview.

And above all it’s a team worthy of being on the biggest stage of all. “It’s magnificent to be in Europe,” a great manager once said, “and this club — a club like Tottenham Hotspur — if we’re not in Europe…. we’re nothing.” But perhaps Sir Bill, without Tottenham Hotspur, it’s Europe that would be nothing magnificent.