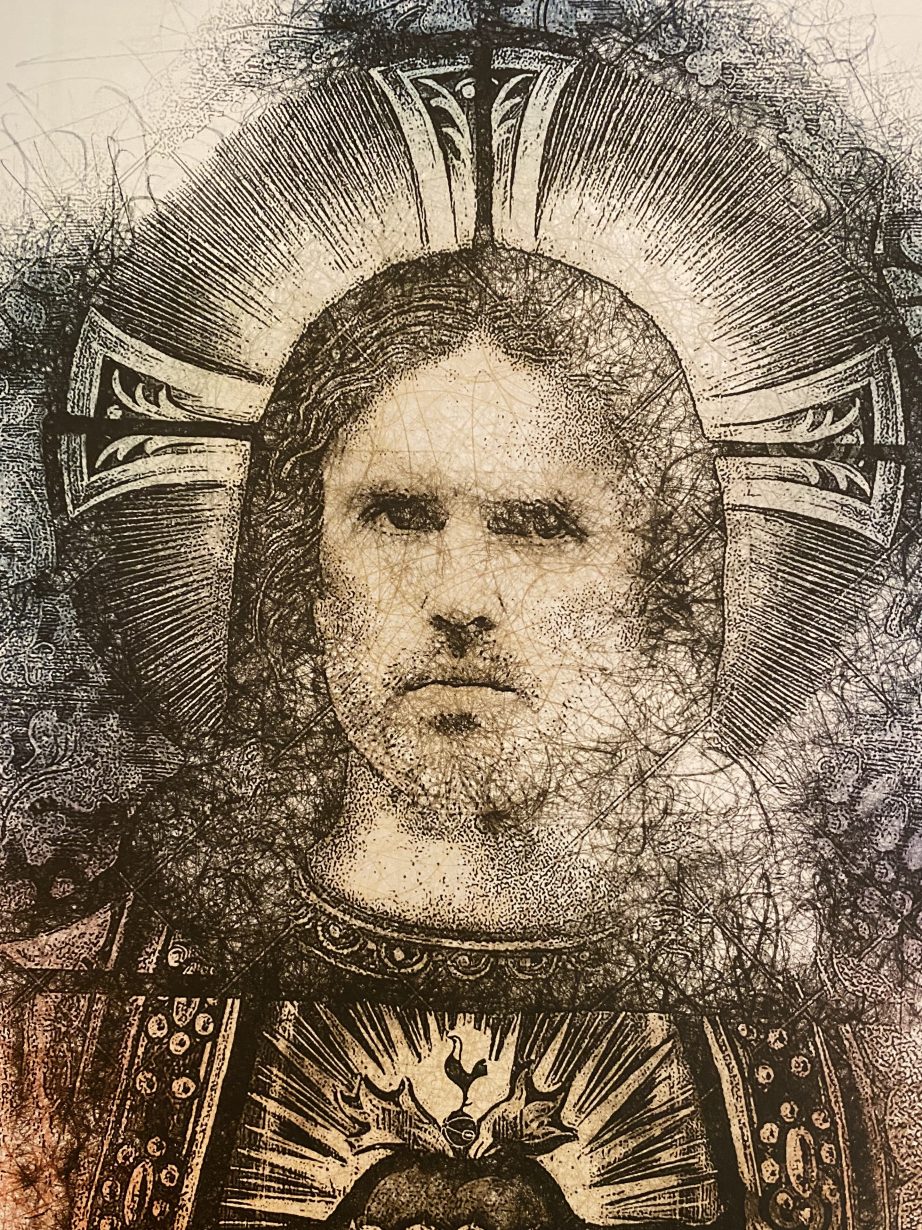 Carrick was different. The strong and silent type. The personification of professionalism. He kept things ticking in the middle and gave us a more majestic presence rather than the usual seasonal jestering.

I’ll never forget the day my world collapsed. The seventh of May, 2006. Tucked in the away end at Upton Park. The final game of the season. The last time football left me this devastated was back in 1987. Like a movie directed by the Coen Brothers, it was all so ridiculously inane, from the lasagne to the claret and blue supporters chanting the name of our red rivals.

The hope I had, personified by Michael Carrick, was left pale and sick. Puke on the turf and later that evening, more of it all over the bathroom floor as I also succumbed to a bout of food poisoning. Spurs and my life intertwined with cosmic comedy. It was a poignant moment. A breaking point. That season, home and away, was my last grand distraction before I stopped the pretence. Before I accepted I was truly ill.

I was deep in depression and losing my mind.

Back in 1987, I was fourteen years of age and madly in love. It was a whirlwind romance. When everything is so perfect you can understand the gut wrenching disappointment when you end up with absolutely nothing. The relationship was over before it could truly blossom. Long term bliss stolen away from my embrace. 1987 was nothing more than a one-night stand and it was a f*cking tragedy. It didn’t matter. I was never going to let go of Tottenham Hotspur.

I look back at that season, the torment of the League Cup semi-final saga and the Coventry 2-3, and I see the true beginnings of my life as a Spurs supporter; I’ll always be dreaming but never wake up.

The transition from the aftermath of that sullen conclusion to ’87 was followed with more dismantling heartbreak. Players that were so important moved on. David Pleat departed with scandal. The 1990s were almost upon us and I had no idea that love would allude me for another decade, aside from a beautiful affair in 1991 that had me fiery with passion.

Paul Gascoigne was the spark that reignited the flame. He’s the only footballer I truly idolised. Even at Newcastle I found myself gravitating towards his eccentric personality and physically powerful pomp. He was pure escapism. Where Glenn Hoddle had elegance and grace, Gazza had dynamite for feet and a heart bigger than the Milky Way. When he snapped himself in the FA Cup final and later left for Italy, I spent most of the 90s alone.

Sure, I occasionally glanced at others before and after. Paul Stewart, Steve Sedgley, David Howells. Unfancied types, flawed and imperfect compared to the more grounded heroes of the early and mid-80s. The likes of Jurgen Klinsmann gave me hope but ultimately, dejection always followed.

It wasn’t until David Ginola signed that I managed to pick up the pieces of my broken heart. The cello-tape kept it from falling apart until he was frozen out of the club by a manager that coached them lot down the road. Grief and misery became the new building blocks to rest upon. Whether it was Sugar v El Tel or splashing money on luxury players, we always lacked a spine, in the boardroom, in the dugout or out on the pitch.

Yet in amongst the surroundings of White Hart Lane, even if the football was at times painful, I always felt at home. Safe and empowered. It was always the greatest of escapes. A weekend of drink, songs and cheers or tears. Being Spurs forever was more important than any given result. It’s always been about belonging.

Away from the Lane, I gradually regressed to a mental state that I didn’t understood or found the courage to question. A darkness that festered for years slowly began to eat away at my sanity. I built walls to fend off anyone that might notice, trapping me inside without the ability to break free. I didn’t want to break free. I wanted to hide away. Recreational drugs, were already a part of my life. When you want to detach yourself further and forget, you take more. You take anything you can get your hands on. Money on powder. Money on pills. Money on escorts.

I stripped my ego to one side and created a functional social zombie on the other. The zombie was the person that went to work, spoke to friends and family, gave no indication or clue of what was going on. The longer I played this part the harder it got so the less time was spent with them with each passing week.

The ego was used for the whoring, the dilated eyes, the black outs, the haemorrhaging of credit cards. The fragile forgotten mess in the middle was left alone in isolation, protected by the walls I built. The mess retained an anchor in reality by frequenting THFC games. It remained the only truly pure experience I lived. That sense of belonging was the only part of me that wasn’t hiding away.

When we lost to West Ham, when Carrick left the field exhausted, I had this unnerving epiphany. Nineteen years after we strolled out on the Wembley turf with Holsten missing on half of our shirts, footballing redemption of the soul was finally basking from the heavens above.

After years of sacrificing expectations, my dreams for my beloved club were on the cusp of going from nightmarish landscapes to vibrant lucidity and finally breaking through the illusions into the waking world. Only for it to all end with crippling sleep paralysis.

My epiphany? Acceptance. I accepted being Tottenham, regardless of the constant let-downs and disarray and transitions. In the midst of it all I still found unbridled joy. Glory even, be it in small doses. In moments or players. I accepted Spurs for all her faults. I always knew this. Belonging. With Spurs and myself falling downwards in parallel across a decade, I realised I had to then accept my own faults or just keep on falling.

Michael Carrick was at the time my new crush. The likes of Paul Robinson, Edgar Davids, Robbie Keane and Ledley King made me skip heartbeats, but Carrick was different. The strong and silent type. The personification of professionalism. He kept things ticking in the middle and gave us a more majestic presence rather than the usual seasonal jestering. Yet there was always this ominous aura about him. Like he wasn’t quite where he was meant to be. Like he was passing through. Like an American TV series where the protagonist helps the needy then moves on when his good deed is done.

There was never any outlandish commitment or loyalty from Carrick. He played for us, he wore our shirt but emotively, there was a detachment. His performances during the season were outstanding. During his time at Spurs he often left pundits in awe of his maturity and influence. For all the imperfections I had embraced over the years, finally here was someone that embodied reliability and consistency. Not exactly the traits I associated Spurs players with. My hero Gascoigne was a maverick afterall, a clown prince raw in emotions and focus.

On that final day when Carrick, along with most of the team suffered from what transpired to be a norovirus, he grafted himself into the ground. His body unable to match his minds willingness to drive the team forward. There was no denying his commitment and loyalty on that day. He gave everything but ultimately he got nothing back. He left for Manchester United that summer.

Carrick picked himself up. So did Tottenham. For both, although on different journeys of self discovery, positives were birthed and new beginnings brought renewed hope.

In the aftermath of that day, I brushed the ego and clone aside and was left standing alone. I let go and then accepted the only true part of me; the f*cked up mess in the middle. For the first time, I accepted my own reality and woke up from the nightmare. It broke me further, it opened a new hole to fall through and I had to fall hard to then be able to pick myself up and start over.

I got myself fixed up over time. I had to learn to leave with it rather than pretend it didn’t exist. I haven’t cured myself from depression. I’ve boxed it up and stuck it away in a corner. I know it’s there. I know exactly what’s inside and how it can make me feel, but I have no desire to reopen it.

Carrick famously commented there was a culture of comfort that held us back at Spurs. The desire to really be competitive, to hate losing and love winning. It wasn’t evident as a collective force to aid us with breaking the top four monopoly. He was right and in the years that followed we’ve broken free of many of those legacy psychological barriers.

Carrick couldn’t save Spurs on that downbeat day in East London. But he saved me.