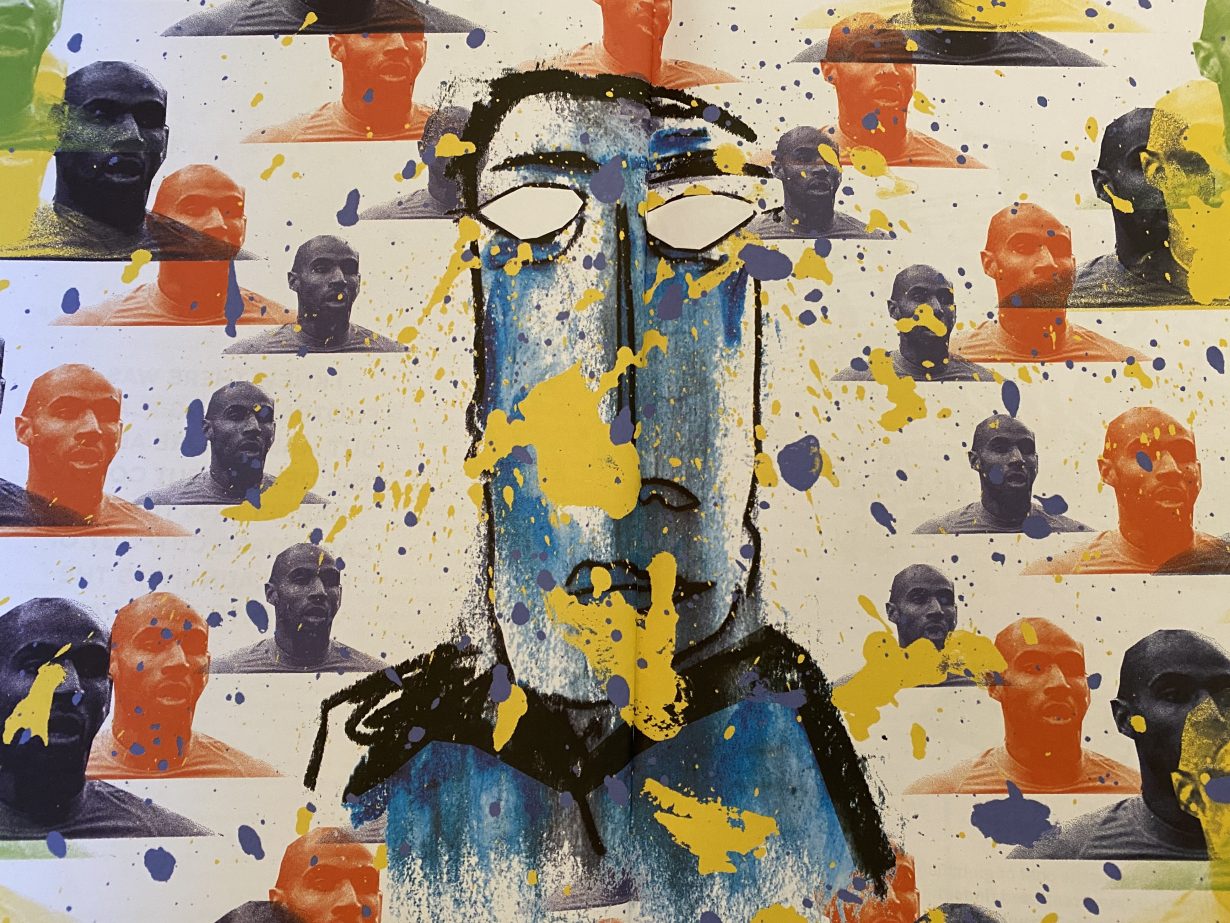 I sobered up for only a second, and then watched the striker transform into a kaleidoscopic freeze-frame that travelled towards me, super-imposing himself on my vision of the pitch...

I love to escape. I’ve spent most of my childhood and adult life doing just that thanks to Tottenham Hotspur. Everyone I know loves music, some prefer literature and the arts but football and Spurs has all the right ingredients for a social cauldron that reflects life itself, with its heartbreak and wonderment, binding it together with one defining difference; It doesn’t really matter. It’s superfluous, or at least from the outside looking in, it ought to be.

It shouldn’t influence personal achievements or your education and career and your general evolution in life from spotted teenager to wise old man. But it will dominate all the time left over as it’s one of planet Earth’s great escapisms. The tribal gathering of like-minded folk screaming, crying, baying, laughing and supporting the team that has chosen them for a life-time of mis-adventures. Football is about as important as you make it and for the entirety of my existence (subject to memory recall) I’ve deemed it my lifeblood. Well almost. See, I love a bit of recreation with the drugs and if I’m honest, I probably couldn’t choice between the two.

I’m not about to preach or explain the virtues of why psychedelic experiences are, for want of a better description, the single best method of plugging yourself into the universe’s root directory whilst you browse its hidden folders. I’m not religious, not in the biblical sense, but I’m spiritual, sort of. You have to be, what with all the praying that gets done at White Hart Lane whilst we beg for the footballing Gods to bestow some luck every so often.

I’m philosophical and a certified jack of all trades and master of none when it comes to the mysteries of the cosmos. In short, I love to immerse myself with organic substances mother nature has given us (that old men lacking wisdom, with agendas, have fathomed as illegal for consumption). I’m talking in particular about psilocybin mushrooms. Magic mushrooms. The food of the Gods.

So what has this other escapism got to do with Lilywhite shirts and following Spurs?

During a short period of my 10 year stint as a season ticket holder I frequented the official Spurs coach to away games. A seedy period of my life. Consider any given forum or message board and its clandestine members and the general misery many can rain down on you until you’re drowning in depressive opinions on why X player is rubbish or X manager should be sacked. Take this slice of the internet and translate the avatars into actual breathing people and then lump them all into the same official club method of match-day travel. It’s no exaggeration that a broad spectrum of our support is thus represented, sharing the long drive up north somewhere.

Now I’m hardly melting hearts like an olive-skinned Ryan Gosling whilst queuing, waiting for the designated coach to pull up, but some of the supporters present made the journey the equivalent of sharing a boat with Charon as he ferries you to Hades. Everything was always doom and gloom. Being a Billy-no-mates when using this service of torture, it meant I sat alone. I’d pick a seat next to a window only to have a couple ask me to swap and end up next to the aisle meaning I couldn’t fall asleep, leaving me listening to the various conversations that suggested impending mid-table mediocrity.

There was this one time I managed to negate all of this and it was thanks to the ‘shroom.

2004, Manchester City away. I was sporting the worst coat I’ve ever bought that made me look like a bin-man. Sat in one of the inside pockets was some left over ‘Goldentop’ mushrooms. I had taken a fair amount of them before with friends during a blistering session listening to Groove Armada.

An internal brain alarm had gone off momentarily. I was considering tripping when tripping with Spurs. The obvious concern I had was whether it was wise doing so outside of the protection of my home (without a sober watcher). I was risking it by taking the experience into a public gathering. Especially one as volatile as a football match.

My intention wasn’t to match my usual indoor (or outside in the safe environment of a back garden) consumption, outside outside at the Eastlands. Just some light states of reality flux to melt the mood and add colour to the dreary conversations that I had to endure on the way. Except I didn’t take them until after we arrived at City, preferring to munch them down in a cubicle in the men’s bogs – without an accompanying biscuit to aid with the rank taste.

I took my place and the football kicked off and I hoped the timing would not leave me a paranoid wreck.

I was soon baked.

I’m not quite sure whether anyone noticed but I’m certain I hardly moved during the entire game. Partly too scared to do so, mostly because if I did then I’d fall into the ice capped volcano below me that had a thousand strong orchestra of penguins playing music with men-shaped violins. Somehow this was my minds idea of what football looked like when I closed my eyes.

Time displacement also meant I was never quite sure when the game kicked off, whether half-time had been and gone and at one point I found myself actually believing I was locked into the stadium after everyone had long left. I felt like my mind was hallucinating the crowds around me to retain the sense of security, that I wasn’t alone. That the game was still being played. But it wasn’t. I was left behind. Why was I left behind? Why hasn’t a steward walked over to escort me out? Is it because I’m surrounded by the hallucinated images of other Spurs fans? Wait, can the steward also see the projections of my mind?

A rabbit hole of make believe narratives that I made myself believe. I was okay though. I figured out the game was still in motion and the people around me existed in the same space time continuum I was sat in.

Thankfully the experience never turned into a  bad (really bad) one. I’ve had that happen and it’s unnerving enough to deal with it indoors compared to being surrounded by thousands of strangers hundreds of miles from home. Add to it the uncertainty of how long it will take for it to subside into that wonderful mellow and warm sensation you get when you’ve logged out of the trip and slowly return to normality. The afterglow has always been one of the most astonishingly vibrant feels you could wish for.

The single moment that appeared to anchor me to where I was and what I was doing was when Fredi Kanoute scored the games only goal. A stunning left foot strike that found its way to the top corner. That’s more or less how the BBC described it. How I saw it was akin to watching a Subbuteo stop-motion animation.

I knew there was football being played but I wasn’t sure about the details, but I could hardly miss the big cardboard cut-out of Fredi launching the ball into the goal and as the stand erupted. I sobered up for only a second and then watched the striker transform into a kaleidoscopic freeze-frame that travelled towards me, super-imposing himself on my vision of the pitch, getting bigger as he got nearer, leaving his previous visual incarnation behind him until he vanished over me and all the copies of Kanoute dissipated into multi-coloured rain drops.

Every rain drop that fell turned every supporter it touched into a dancing Fredi caricature. I was surrounded by them. Millions. Trillions. Kanoute was everywhere and I couldn’t help but reach out and touch him and his multiple versions. Thankfully, this is probably the only instant when touching men in public whilst screaming ‘I LOVE YOU’ isn’t deemed to be inappropriate behaviour.

Spurs held on for the 1-0. Jingle Bells was sang as we returned to the coach. I often recall it was snowing inside in the stadium as I followed the maddening crowd and thus profoundly understood how the physics of weather can manipulate and penetrate brick structures. There was no snow on the night. I think. Specifically inside the stand. It was defo snowing inside my skull.

I found my way back by chance as I don’t remember walking there (once outside) although I do know I sat down in just about every single seat in the coach until someone guided me to the right one saying “…just how much have you had to drink lad?”

I started to come down at some point after we departed back to London. The afterglow, yum. The sound of the coach, it’s engine and the background conversations felt so good it could have been a long lost Brian Eno album, ‘Music for Tottenham away days’. I’ve never repeated that day’s chemical high, in public, at a football match. This type of thing should always be introspective or shared with friends, together.

It’s a process between the bridge your brain generates to ignite your subconscious with epiphanies and the organic marvel of ‘shrooms. It’s natural drugs mixing with biological drugs. Molecules dancing with chemicals. Access to the type of filters that Instagram could never offer you. But much like Tottenham, it has to choose you. You can never feel as though you’re being told or forced to experiment. If you don’t fancy it then it’s very likely it isn’t for you.

Not long after, I matched this high with a low that had me suffer food poisoning on the day West Ham beat us 2-1 in 2006 (having attended the game). It wasn’t lasagne but pizza. Mushroom pizza in fact, with anchovies, which I criminally re-heated after returning from Upton Park. That was a rather ironic catalyst for the day and what followed, that tied into the conclusion of a truly dark period in my life.

I often wonder what a Gareth Bale goal would have looked like with a Goldentop fizzing around my brain. Alas, I’ll have to make do with the memory of Kanoute and his magic rainbow volley.

Originally published in The Fighting Cock fanzine, issue 3. This is the redux version.