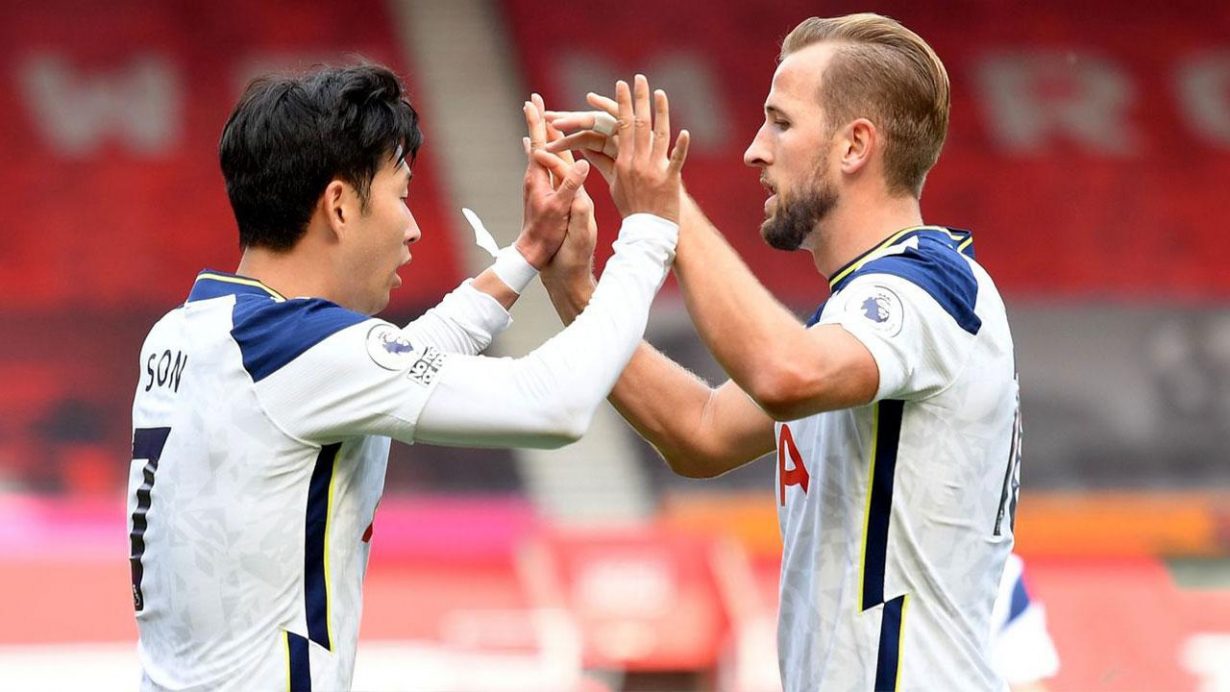 Both sides looked vulnerable at the back, and it was a day where attackers shined while defenders shrivelled.

Tottenham secured their first Premier League win of the season with a 5-2 demolition of Southampton at Saint Mary’s stadium. Son Heung-Min starred with a four-goal haul, while Harry Kane grabbed Spurs fifth in a frenetic encounter.

Spurs thought they had the lead inside three minutes when Kane swivelled to fire in expertly following a Son cross headed down by Doherty. VAR showed the South Korean had been marginally offside in the build-up. But the tone for the match had been firmly set. Both sides looked vulnerable at the back, and it was a day where attackers shined while defenders shrivelled.

Given the number of chances created at either end, it was surprising that it took 31 minutes for Danny Ings to open the scoring. The Saints striker fastened on to a pass played down the right-hand channel before dispatching the ball superbly across Hugo Lloris into the far corner. It was the type of razor-sharp finish that brought Ings 22 league goals and an international recall last season.

Southampton had been in the ascendency before the goal and continued to look lively after taking the lead. Ralph Hasenhüttl’s men were left kicking themselves for failing to extend their advantage in what remained of the first half against a Tottenham side visibly lacking in confidence. Spurs, who endured an uncomfortable passage through the Europa League second qualifying round in Bulgaria midweek, struggled to find any rhythm to their game. But with forwards of the quality of Son and Kane, Tottenham always carry a threat.

Seconds before the interval, Tanguy NDombele, making a rare Premier League start for Mourinho, shrugged off Romeu before pirouetting with balletic balance to escape Ward-Prowse. His probing pass released Kane down the left, who in turn threaded it on first-time to the onrushing Son. Son’s clinical right-foot finish, driven in from the angle, completely changed the course of the match.

Within two minutes of the restart Son and Kane combined again to give Tottenham the lead. Southampton’s defence, slavishly committed to pressing high up the pitch, was nowhere in sight as Son burst through before dispatching left-footed.

Kane, whose aptitude as a provider of chances almost rivals his magnificent goalscoring gifts, was also the creator of Spurs third. Gathering in a fierce ball fired up to him on the halfway line by Davinson Sanchez, the England captain immediately released Son with a lofted pass over a stranded Saints rearguard. Son’s rapier-like shot into the bottom corner to complete his hattrick effectively killed the game with 30 minutes still to play.

Less than ten minutes later, Son had his fourth goal and Kane his fourth assist. It was the best of the lot. Kane forced wide on the right somehow steered a sublime curling pass around the Southampton defence, which the Spurs number 7 had time to chest down and stab home with relish. Jose Mourinho’s side’s first-half travails were now a distant memory. It had become a south coast stroll.

It was only fitting that in the 81st minute, Kane added his name to the expanding scoresheet. Substitute Erik Lamela escaped the negligent Southampton back four to shoot across the exposed McCarthy. The Southampton keeper’s fingertips turned the ball onto the inside of the post, but there was to be no reprieve. As the ball bounced up, Kane reacted first to divert into the net from close range.

Kane was substituted soon after, leaving the Saint Mary’s pitch in very different circumstances to last season, where he suffered a terrible hamstring tear in the corresponding fixture. Had there been fans in attendance for this one, it may have been a rare occasion in English football where all sides of the ground stand to acclaim a supreme talent.

There was still time for an appalling VAR decision which awarded Southampton an 88th-minute penalty. It was given for handball against Doherty who saw the ball rebounded onto his outstretched arm from Harry Winks’s foot at a distance of less than a yard. It’s ‘clear and obvious’ that there is a growing chasm between officials and fans when it comes to what constitutes handball. Fortunately for Spurs, Ings’s emphatic conversion from the spot proved academic.

Jose Mourinho’s side now faces a muscle-tearing run of three games in six days, including a whistle-stop tour of Macedonia. The Portuguese, who left Dele Alli out of the matchday squad asserting that he has too many players, will certainly need to manage the workloads of Kane and Son carefully. Spurs fans will leave this headache for their manager to ponder and instead start to dream as to where their truly world-class front three of Kane Son and Gareth Bale can take them.