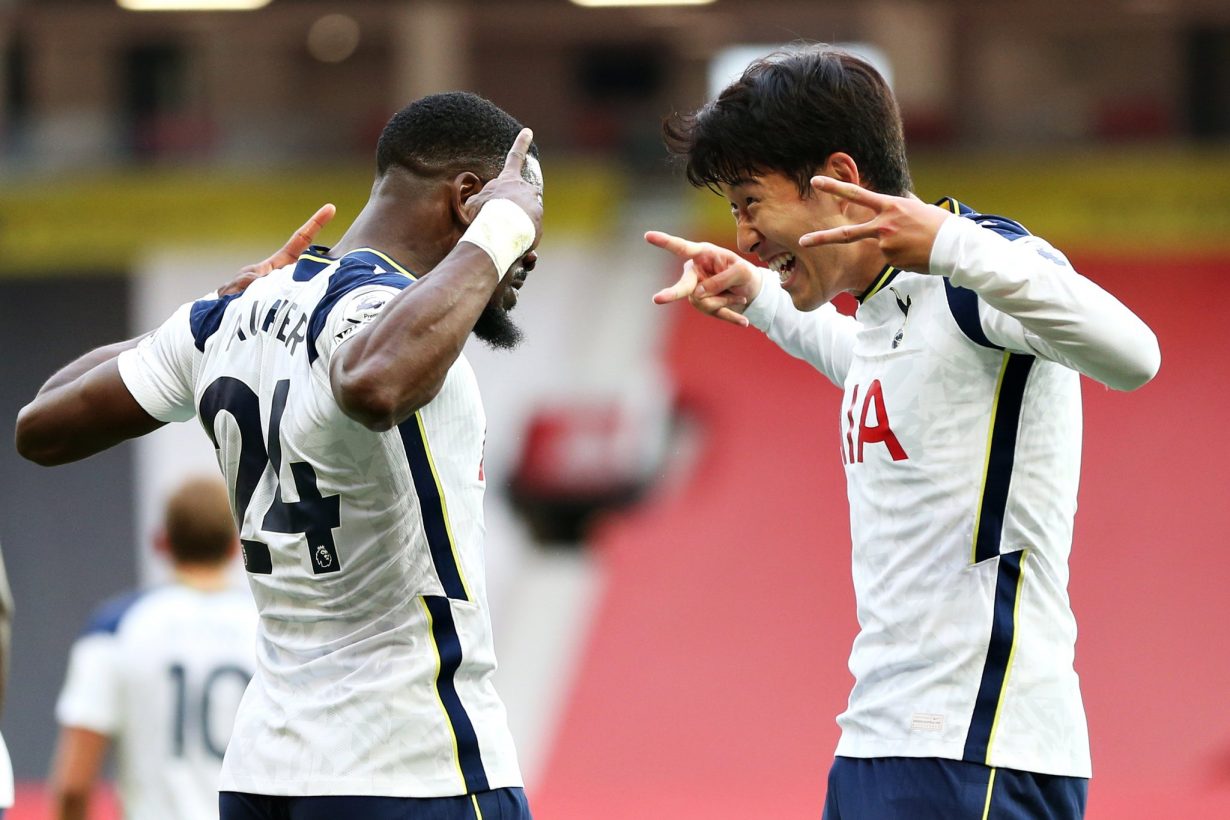 For Mourinho, this was the sort of emphatic result that will have prompted even his biggest detractors to wonder if he might just be capable of leading a team to the game's top prizes one more time.

Spurs demolished Manchester United 6-1 at Old Trafford to secure their third victory in three different competitions in the space of six days.

It was a victory that sealed the best week in Jose Mourinho’s Tottenham tenure – and with Gareth Bale still yet to make his second debut for the club – Spurs fans will believe this season could become a very ‘special one’.

Remarkably, given what followed, it was the home side who took the lead in the first minute. Anthony Martial burst into the box, inviting Davinson Sanchez to make a tackle. The Spurs centre-half, like so many visiting defenders before him, couldn’t resist. A clumsy challenge resulted in referee Anthony Taylor pointing to the spot. Bruno Fernandes cooly converted. It was to be the only minute of the match where United looked capable of winning.

Spurs were back on terms almost immediately. Eric Bailly and Harry Maguire attempted some ill-advised head tennis in their own box, which encouraged the terrier-like Erik Lamela to give chase. The Argentine, making a rare Premier League start for Spurs, forced a mistake which presented Tanguy NDombele a simple chance to fire home from close range.

The fragility of United’s defence and confidence was exposed further in the seventh minute. Maguire fouled Kane just inside the United half. The England captain picked himself up quickly and spotted the darting run of Son with a precise pass. Kane has always possessed great vision, but his combination with Son in the early weeks of this season is worthy of comparisons to the finest striking partnerships of the Premier League era. Son sprinted past Bailly and Shaw, and with De Gea rushing to confront him, delicately dinked the ball into the far corner left-footed to put Spurs ahead.

Spurs created multiple chances as United wilted, but rather than another goal it was a red card that ended any possibility of a comeback. As Son prepared to whip in a 28th-minute corner Lamela – a player whose enthusiasm for the game’s dark arts doubtless endears him to his likeminded manager – pushed a forearm into Martial’s throat, hoping for a reaction. Martial took the bait and struck Lamela on the chin. It was far from a knock-out blow, but Lamela went down holding his jaw. Martial received his marching orders. United collapsed.

Tottenham’s third came within two minutes of the Frenchman’s dismissal. De Gea played a short goal-kick to the accident-prone Bailly. The defender attempted to thread the ball through a non-existent gap in his own box. Kane intercepted and immediately exchanged passes with Son, the earlier favour returned, before steering the ball past De Gea. Kane had his fourth goal in as many days. It wouldn’t be his last.

Tottenham’s fourth goal at the Stretford End came nine minutes before the interval. Sissoko patrolling the half-way line switched the play to the wide-open space which appeared time and again on United’s left. Aurier stormed onto the pass and cut a low cross to the near post where Son was on hand to squeeze the ball through the exposed De Gea’s legs.

At half-time United manager Solskjaer attempted to stem the bleed, replacing Matic and Fernandes with Fred and McTominay. It made little difference. A quick triangle between NDombele, Moura (who’d replaced the yellow-carded Lamela at the break) and Hojbjerg, saw the Dane play in Aurier, again granted the freedom of United’s left. This time rather than looking for a team-mate, Aurier struck for goal. His low strike nestled into the far corner for Tottenham’s fifth.

Mourinho was now free to rest players. It was a wise move from the Portuguese as United’s frustrations manifested in Moura, Kane and Son being subjected to crude challenges from Bailly and Shaw. Son was replaced by Ben Davies as the game entered its final 20 minutes. The Welshman didn’t take long to have an impact. Receiving the ball on the left-wing, he motored into the United box before checking inside.

Paul Pogba slid in recklessly, leaving Anthony Taylor to award the game’s second penalty. The first, which had given United the lead, was by now a distant memory. Harry Kane powered the spot-kick into the left corner, allowing his manager to revel in the joy of six scored against the club that sacked him less than two years ago.

It was a result that may be of significance for the man Mourinho replaced in his current role. The out of work Mauricio Pochettino will no doubt have been watching on with interest. Ole Gunnar Solskjaer will know that losing badly before an international break always causes concern in boardrooms.

For Mourinho, by contrast, this was the sort of emphatic result that will have prompted even his biggest detractors to wonder if he might just be capable of leading a team to the game’s top prizes one more time.