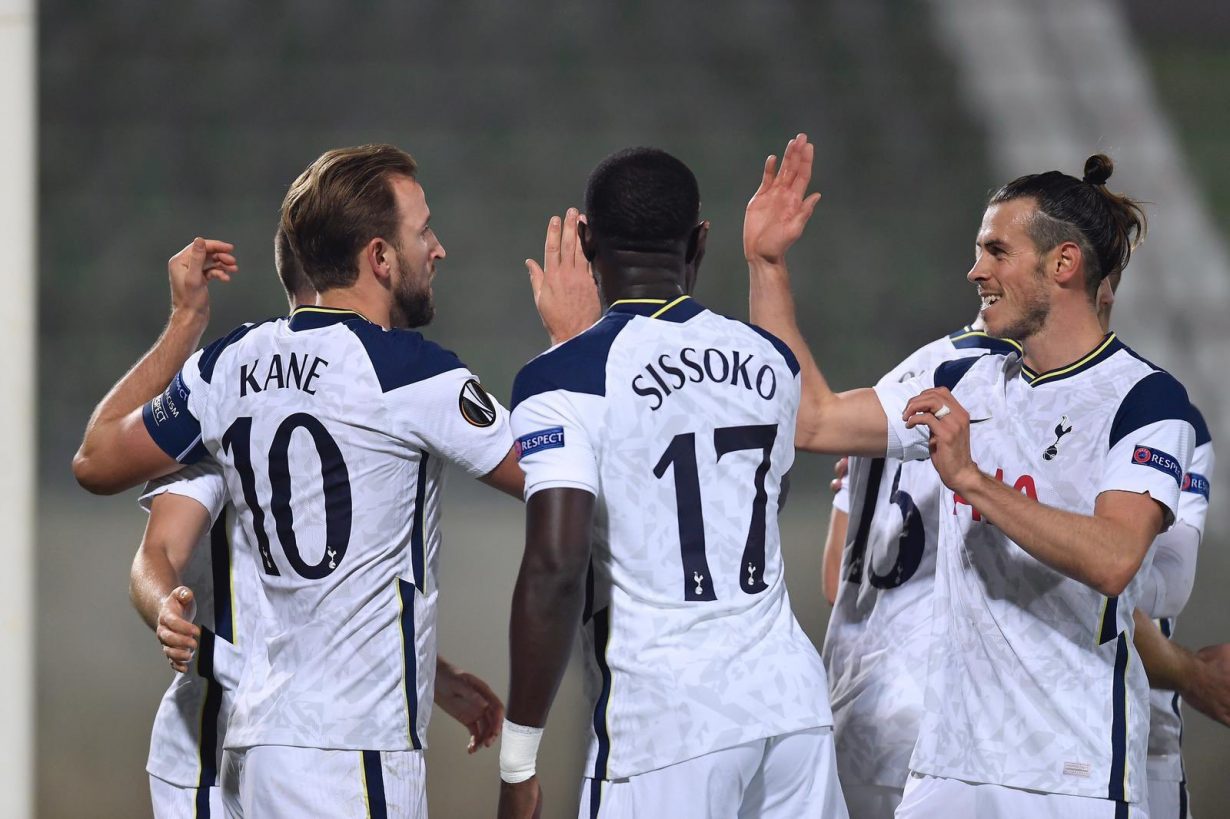 Spurs were swarming all over the home side as the first half drew to a close. Bale, buoyed by his winner at the weekend, was enjoying his best outing since his return to the club.

Harry Kane scored his 200th Tottenham goal in his 300th appearance for the club, as Spurs overcame Bulgarian champions Ludogorets in the Europa League.

Having lost a week ago in Antwerp, Jose Mourinho’s team selection reflected the must-win nature of this game for his side. Harry Kane had not started either of Tottenham’s group stage matches in the competition so far this season. His presence, leading the line here, ensured Spurs were on the front foot as soon as the game kicked off. Kane should have opened the scoring within 90 seconds.

A lovely triangle of first time passes between the England captain, Lo Celso and Winks, enabled Winks the space to clip the ball over the home defence for the onrushing Kane. It says everything about Kane’s stellar Tottenham career that there were genuine looks of shock on the faces of his teammates when his attempted finish sailed high over the bar. Most weren’t at the club the last time a match report could legitimately accuse Kane of showing a distinct lack of composure in front of goal.

It didn’t take him long to restore regular service. With five minutes on the clock, the forward’s right-foot shot from 20 yards crashed against the post. Seven minutes later, Kane opened the scoring. Lucas Moura whipped in an inswinging corner which the Tottenham number 10 rose to power beyond Iliev. It was appropriate this landmark 200th goal for Kane came in the Europa League. While Spurs may have had loftier ambitions in recent seasons, it is a competition that has been pivotal in Kane’s development as one of the continent’s truly elite players.

His Tottenham debut came in the 2011 Europa League, as did his first Spurs goal. His 2014 group stage hat-trick against Asteras Tripoli was his first treble for the club – a game he ended playing in goal having replaced the red-carded Hugo Lloris – and convinced Mauricio Pochettino of his readiness for the Premier League. Since then records have tumbled at a staggering rate, and now at just 27, he is one of only three men to have scored 200 goals for Spurs.

But there is so much more to Kane’s game than goalscoring. Time and again here he drifted into spaces the Bulgarian champions could not find him. Tottenham were able to play fast, precise balls from midfield into the attack. Harry Winks, who had looked devoid of confidence and afraid to make forward passes in Antwerp, was transformed by Kane’s presence on the pitch. So to Giovani Lo Celso. The Argentine has endured a staccato start to the campaign. But this was a return to the form he showed at the back end of last season which had Tottenham fans so excited.

His incisive reverse pass in the 24th minute released Kane inside the Ludogorets box. Kane pulled the ball across towards Moura who looked to have a tap in, only for Ikoko to intervene. Just after the half-hour mark, Kane again found space in the right of the Ludogorets area. Bale found him with the outside of his left foot, dissecting two defenders with his pass. Kane glanced up and again rolled the ball square for Moura who this time, unattended, tapped home Tottenham’s second.

Spurs were swarming all over the home side as the first half drew to a close. Bale, buoyed by his winner at the weekend, was enjoying his best outing since his return to the club.

Such was Spurs dominance, and Mourinho’s confidence, Kane was replaced by Vinicius at half-time. Moussa Sissoko also made way for Hojbjerg. As Tottenham readjusted, Ludogorets made their first real forays into Tottenham territory. An optimistic 49th-minute shot from the edge of the box, looped up off Winks boot and fell perfectly for Claudiu Keseru to sweep beyond Joe Hart. Even with all of Tottenham’s quality, there is still a sense they are defensively vulnerable. This concession, however, owed more to misfortune than mistakes. What should have been a stroll now threatened to become a slog.

The luminescent Lo Celso presented Vinicius with a chance to restore Tottenham’s two-goal cushion almost immediately. His cut-back found the striker on the penalty spot but leaning back the Brazillian thrashed the ball wildly over the bar. Like those who have come to play second-fiddle to Kane in the past, Vinicius will find it very hard to secure the minutes any goalscorer needs to build confidence.

The glaring nature of the miss soon had Mourinho instructing Son to warm up. With half an hour to play the South Korean replaced Lucas Moura. Seventeen seconds later, the star substitute set up Tottenham’s third and decisive goal. Hojbjerg pounced on a loose ball out of the Ludogorets defence before setting Son away. Son’s ball across the box took both defenders and goalkeeper out of the game, leaving Lo Celso the simple task of stroking home into an empty net.

With Antwerp losing at home to LASK, Spurs reversed all of the damage done last week in 90 minutes. They now sit top of the group. In Harry Kane, they have Europe’s most in-form player, and in Mourinho, they have a manager who has gone all the way in this competition twice before. The question everyone at Spurs must ask themselves is, if not now, when?