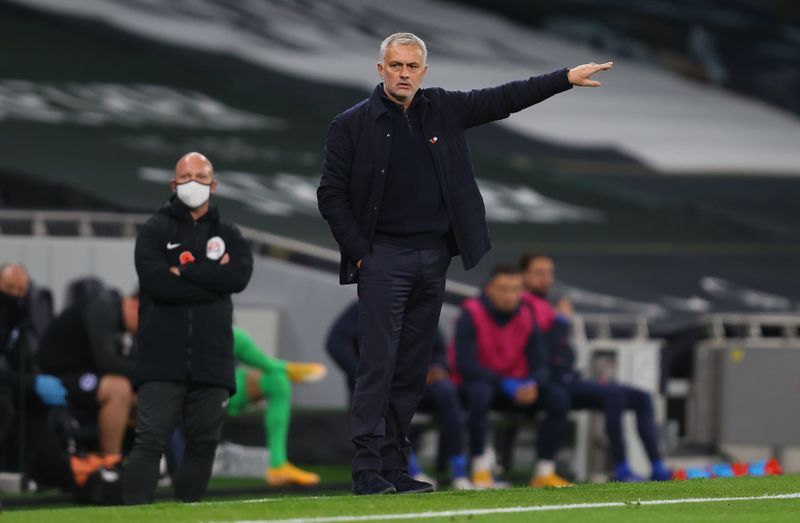 Mourinho is famous for his ‘guided discovery’ attacking approach, where players must work out problems for themselves. It means his teams can lack structure going forward, but it also allows for a great degree of freedom.

Are we good again? I’m not really sure.

I’m fairly certain we’re competent, like an aging civil servant waiting for retirement, but competency isn’t sexy or exciting. It’s a base-level expectation for ourselves, our boss and our football team.

Perhaps I’m being a little harsh. Competency can gain you a Premier League winners medal should it be accompanied by a side order of flair. You still need that little bit of magic, and to be fair we’ve seen a decent amount of swagger this season.

Mourinho is famous for his ‘guided discovery’ attacking approach, where players must work out problems for themselves. It means his teams can lack structure going forward, but it also allows for a great degree of freedom. When everything clicks, we can be truly devastating, though it probably helps to have two of the foremost attacking options in world football in your starting XI.

It might not be purposeful, but since the capitulation against West Ham we seem to have curtailed our natural offensive instincts. I wonder whether this most recent of calamitous episodes, which fits neatly within our magnus opus of misfortune, might have had the same effect on Mourinho as Spurs did during his second spell as Chelsea coach.

After beating them 5-3 in a brilliantly entertaining and open match, (you know the one), the Portuguese shut up shop. There would be no more freedom or creativity round these parts, he determined, like an obdurate town sheriff trying to protect his citizens from roaming Klopps and Guardiolas; modern bandits with the latest weaponry.

I hope that isn’t the case, because I was rather enjoying his new look Spurs team. We were bat-sh*t crazy, true, but when haven’t we been? Everton at home on the first day of the season? Nah, don’t fancy it mate. United away, our third match in six days after a gruelling win on penalties against Chelsea? Yeah not a problem. Completed it.

I suppose you’re unlikely to win anything with such an inconsistent approach, which is probably why we’ve started to look a bit more measured. We’re still looking to find that perfect balance between defensive resoluteness and effective, goal-scoring prowess. Not many teams manage it, but we just might just be moving in the right direction.

Wins against Burnley and Brighton were not pretty, but, and hear me out, they were probably exactly what we needed. The players needed to know they could see out a game. They needed to know that, when the going gets tough, and you’re delicately nursing a single goal lead, it’s possible to sit in, defend like your life depends on it, and get a result. Occasionally, the referee in charge will have had enough of such a defiant display and do his utmost to intervene, but that is probably an article for another day…

I still don’t think I’ll ever get used to us running down the clock. We always want that extra goal cushion- it’s an antidote to prospective embarrassment. We’ve been here too many times before, and I can see why so many of us don’t think they can cope with a whole season of it.

It’s had a deep-rooted, psychological effect. We describe steely, scrappy wins in pejorative terms because we assume eventually our luck will be out. We have to be an attacking, goal scoring machine because that is the only way we can win games. Maybe that’s why faith in ‘The Tottenham Way’ has such a powerful, enduring appeal.

If you believe ‘Spursyness,’ or whatever you want to call it, is real, maybe it becomes a self-fulfilling prophecy. It’s this that Mourinho needs to iron out. That nervousness and expectation of failure. We need to be less self-deprecating, I think, because that timidity can spread throughout a club like an unpleasant stench, getting up the noses of everyone involved.

It might feel like we’ve never been a particularly confident fanbase, but we definitely were for a time. During that final season at White Hart Lane I genuinely went into every game expecting a win. It was a surreal, strange experience. Almost other-worldly. One of my fondest memories from that period was an interview Quique Flores gave after his Watford side had been battered under floodlights on a chilly February afternoon.

He spoke with a thousand-yard stare after the traumatic mauling he’d just witnessed, and said we were like ‘wild animals’ in the way we hunted his team down. He said it was ‘impossible’ to play against Tottenham Hotspur. I really wish that had been true.

I wonder whether the dramatic downfall of that particular side, the best Spurs team I’ve witnessed, has also made us reluctant to fully get behind the Mourinho project. We know better than anybody how fragile success is, and how easily it can slip through our fingers. We don’t want to invest too much, because the ending can be so painful.

That being said, football is a strange game, and perceptions dramatically shift from one week to the next. It’s easy to be caught up in misplaced enthusiasm or unfair criticism. No matter how objective we try to be, everyone has an agenda, and we like to pitch our tent in a clearly defined camp. Mourinho in, Mourinho out, Mourinho’s boring, Mourinho’s a winner, blah blah blah. It’s all a little tedious. Football’s much more complicated than that, but I think deep down, you know that, don’t you?

It’s far too early in the day to make judgements on where we will be come the end of the season, but I don’t think it’s going to far to suggest we look in decent shape. Second in the league after seven games is a good effort from a team that are notoriously slow starters. Should we go on a long unbeaten run, I’m sure even the most ardent cynic would struggle to contain their excitement.

That’s the trouble with our fanbase. We’re dreamers and romantics, which might be why there’s more than a whiff of Shakespearean tragedy about our recent past. We want things to work out the way we imagined they would. We’re meant to be swashbuckling, not pragmatic, exhilarating rather than dull.

Well, sometimes, in life as well as football, you have to take the rough with the smooth. We might not become the team you thought you wanted, but we could quite easily become the team you didn’t know you needed. Who knows, we might even start to feel confident again.