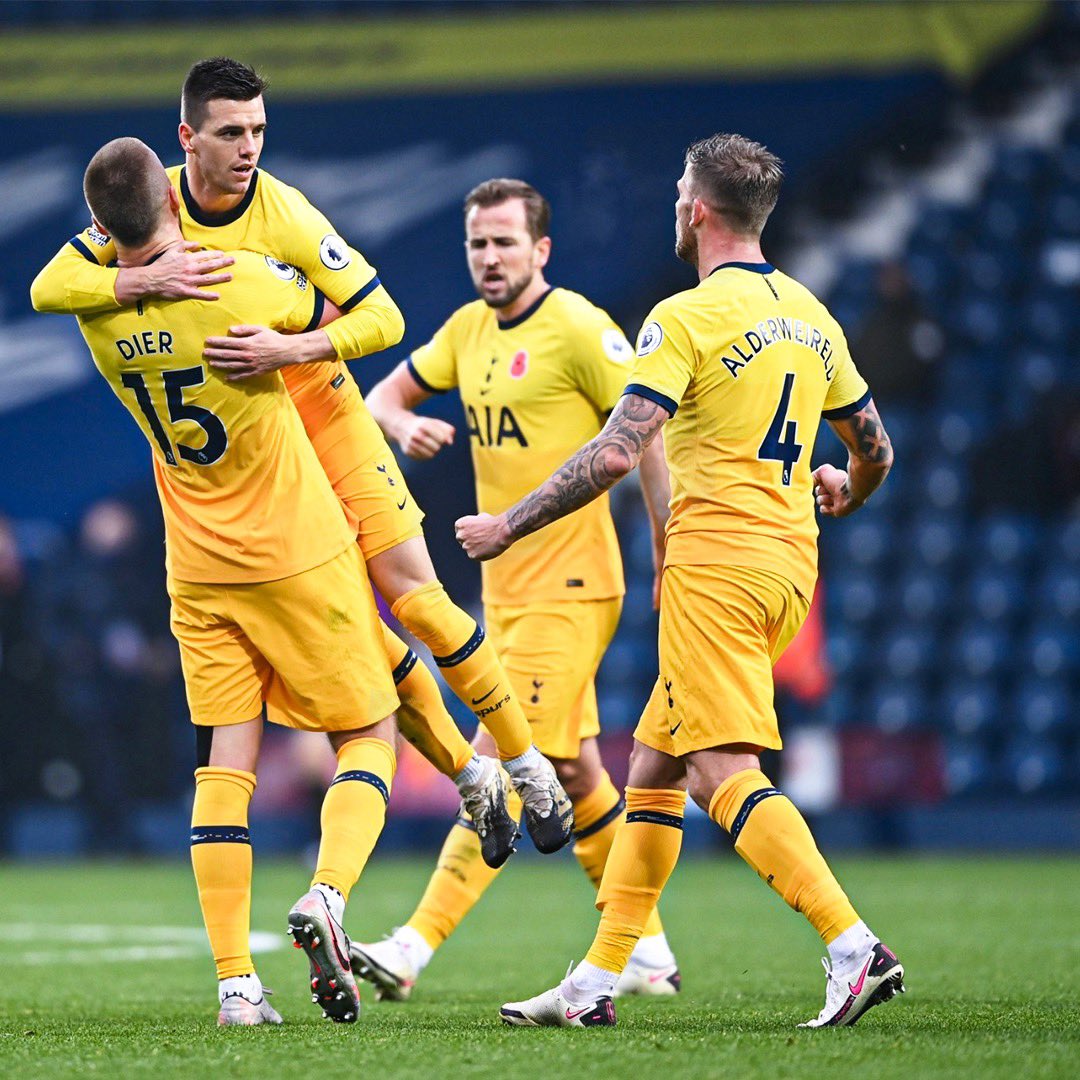 The reaction that greeted the full-time whistle from the Spurs players and bench demonstrated that this was a game the North Londoners felt they had to win.

An 88th-minute winner from Hary Kane at The Hawthorns sent Tottenham to the top of the table. Briefly. It was Kane’s 150th Premier League goal and maintained Spurs perfect away league record so far this season.

Before the England captain’s decisive intervention, West Brom’s resilient rearguard appeared to have done enough to frustrate Tottenham and secure a battling point. However, such are the attacking riches boasted by Jose Mourinho, nullifying Spurs for the entire 90 minutes is fast becoming the sternest assignment in English football.

Tottenham fans longing to see the Kane, Son and Bale triumvirate deployed from the start finally got their wish here. As Spurs dominated possession in the early stages, their forward stars combined to fashion the game’s first chance after 12 minutes.

Bale in the left-back position drove a raking pass down the line, releasing Kane in the left channel. Kane found NDombele, who did well to chest the ball down, pirouette and lay off to the unmarked Son in the box. Uncharacteristically the South Korean hesitated before releasing his shot, allowing the West Brom defence to converge upon him and block his goal-bound effort.

From there, the home side established a foothold in the match. Staying compact, they allowed the Spurs central defenders to have harmless possession before pouncing upon errant passes into the congested midfield.

The Baggies should have taken the lead in the seventeenth minute. Darnell Furlong’s teasing cross picked out Karlan Ahearne-Grant who had darted between Dier and Alderweireld. The striker skewed his header horribly wide.

If Dier had been culpable for the concession of that chance, he was soon responsible for keeping Spurs clean sheet intact. Robinson’s left-footed cross to the back post left Lloris stranded. The ball looked set to drop in over the French goalkeeper before Dier cleared from underneath the crossbar with a superb defensive header.

As the half wore on, Sissoko, Ndombele and Reguilon were all guilty of turning over possession needlessly, much to the chagrin of their increasingly animated manager. The dugouts at West Brom, comprised of little metal benches, are the least luxurious in the top-flight. But rather than the furniture at The Hawthorns being the source of Mourinho’s discomfort, it was his side’s display causing him to scowl and prowl the touchline.

After the interval, and doubtless, a few harsh words from their manager, Spurs improved. The ball was moved faster and with more accuracy. Nevertheless, it was West Brom who came closest to opening the scoring. An early second-half corner exposed Tottenham’s frailty from set-pieces, an unwelcome feature of their season to date, as O’Shea sent a free header narrowly wide.

Albion’s profligacy was almost immediately punished. Kane roamed down the right-wing before checking back and lofting a pass across the penalty area. There, arriving at full stretch, Bale just failed to make sufficient contact to send the ball on target.

As the 60-minute mark approached, having failed to register a shot on target, Tottenham finally started to test Johnstone in the West Brom goal. Reguilon’s swerving long-range strike drew a first save from the Baggies keeper. Then Son, played in by Kane, tested him again with a low shot at the near post.

Just after the hour, Mourinho replaced the injured NDombele with Lo Celso. The Argentine should have given Spurs the advantage within two minutes of his introduction. Reguilon flashed a ball across the box which Kyle Bartley could only divert to the Tottenham man, eight yards from goal. The chance required a composed finish, which Lo Celso, thrashing at the ball, failed to provide.

West Brom then had further good chances of their own. Gallagher left Lloris rooted as his shot from the edge of the box grazed the post on its way wide. Then Lloris produced a sharp reflex save to keep out Furlong’s flick-header from a West Brom corner.

On 78 minutes Bale and Sissoko made way for Vinicius and Moura as Mourinho sought a winning goal. Vinicius drew a fine stop from Johnstone, having swivelled on Reguilon’s cut back before driving in a fierce shot. At full stretch, with the ball almost beyond him, the keeper clawed it out brilliantly.

Just as the game looked destined to peter out in stalemate, Matt Doherty advanced down the right-wing. The Irish full-back, whose attacking forays were few and far between in the match, suddenly found himself in space. With time to look up, he flighted a ball deep into the West Brom area. Johnstone was tempted from his line with no realistic prospect of getting to the ball before Kane. By the time he realised his mistake, it was too late. The striker’s deft header sailed over the keeper and settled the contest.

The reaction that greeted the full-time whistle from the Spurs players and bench demonstrated that this was a game the North Londoners felt they had to win.

Their stay at the Premier League’s summit may only have been brief this weekend but hard-fought wins like this suggest when it comes to mounting a sustained title challenge, Spurs are in for the long haul.