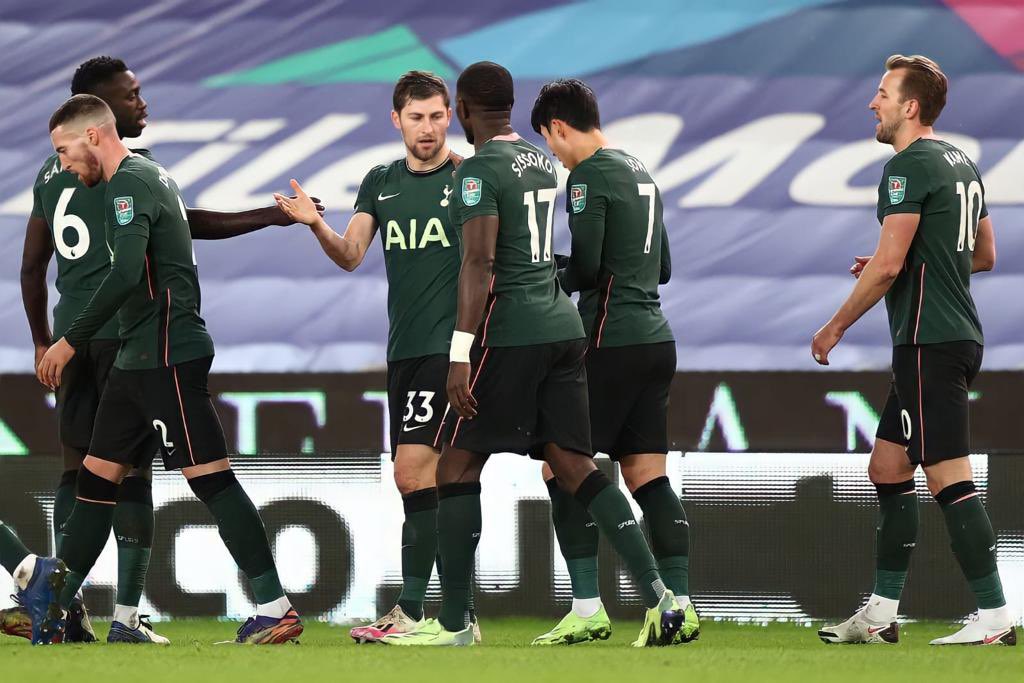 Spurs are now just two victories from their first silverware in 13 long seasons. Having won this competition a record four times already as a manager, Mourinho fully intends to deliver.

Tottenham edged a step closer to Wembley with a comfortable 3-1 victory over Stoke in the Carabao Cup quarter-final.

Having endured a run of three league games without victory which has seen his side fall behind the Premier League pace, Jose Mourinho rang the changes. Only the spine of Lloris, Dier, Hojbjerg and Kane remained from the team that laboured in the weekend’s loss to Leicester.

Perhaps fearing a Tottenham backlash, Stoke adopted an ultra-cautious approach in the opening exchanges here, stationing a back five across the eighteen-yard box and challenging Spurs to unlock them.

But for one delicious flick from Gareth Bale that freed the marauding Matt Doherty to feed Kane for an early shot, the Potters plan frustrated Spurs for the opening twenty minutes. Lucas Moura’s insistence on drifting infield from his perch on the left only added to the congestion zone in front of the home side’s box. With little sign of an imminent breakthrough, Moura rolled a pass into Winks in a central position.

The midfielder swept the ball immediately into the box looking for Doherty’s run. Distracted by the Irishman’s dash, the Stoke defenders failed to recognise the threat posed by Gareth Bale. Unmarked on the penalty spot the forward’s perfectly executed flicked-header guided the ball down onto the greasy turf, where it skidded beyond Lonergan’s desperate dive into the net.

It was the sort of progressive pass from Winks that should make him a viable alternative to the conservative Sissoko. Incredibly though for a player who is often feted for his keen eye and sharp distribution, this was only the third assist Winks has provided in his lengthy Tottenham career.

The goal heralded a period of dominance where Spurs should have killed off the tie before half-time. Dele Alli, enjoying a rare start, looked hungry to add his name to the scoresheet. His penetrative runs were increasingly prominent as Tottenham searched for their second. On 34 minutes, Winks intercepted a ball on half-way and instantly supplied Kane. The England captain held on to the ball just long enough to tempt the Stoke central defenders out of their rigid shape before slipping Alli through.

Alli’s shot across Lonergan looked destined for the far corner but was diverted away by the keeper’s outstretched leg. Shortly after Alli tested the veteran shot-stopper again with a firm strike from outside the box following a neat exchange between Bale and Moura.

The introduction of Son for Bale at the interval suggested Mourinho’s determination to press home his side’s advantage. Instead, it was Stoke who came out swinging. Seven minutes into the second period, the wily Steven Fletcher dropped deep to receive the ball before setting Jacob Brown away down the right. Brown’s ball across the Tottenham area dissected the sleeping away defence and left Jordan Thompson the simple task of firing past the exposed Lloris from six yards.

The equaliser revealed the fragility of the North Londoners confidence following their recent Premier League travails. Moura, in particular, started giving the ball away with alarming regularity. It was not long before Mourinho made changes. That the misfiring Brazilian was replaced by Sissoko came as no surprise, while Alli made way for Lamela. The verdict was harsh on Alli. He had been Tottenham’s brightest player, but it is clear when matches are in the balance he still does not have his manager’s trust.

Lamela’s presence certainly mainlined some urgency into Tottenham’s second-half showing. The spikey Argentine would surely be a favourite of Mourinho’s were he not so susceptible to injury. Within minutes of the changes, Spurs restored their advantage, Winks flipped a ball towards Kane, which the Stoke defender Harry Souttar charged down, the ball broke loose to Ben Davies on the edge of the Stoke area. The left-back took one touch to steady himself before arrowing a fierce drive along the ground into the far corner of Lonergan’s net.

Five minutes later Spurs thought they’d sealed the contest. Kane robbed Souttar and released Son, giving the free-scoring forward a clear run on the Stoke goal. Son’s delightful dink over the onrushing Lonergan was cancelled out by the offside flag. The intensity with which the South Korean beseeched the officials for a rethink suggested it must have been a close call. Replays showed it wasn’t. Son was comfortably onside – but there is no VAR in the Carabao Cup.

Happily, for Mourinho and Spurs, it proved inconsequential. With ten minutes remaining Sissoko seized on a lax touch in the home midfield. His first-time pass enabled Kane to sprint clear. The striker shifted the ball to his right, before lashing his shot into the roof of the net. It was Kane’s 16th goal of a stellar season and ensured there was no way back for Stoke.

Spurs are now just two victories from their first silverware in 13 long seasons. Having won this competition a record four times already as a manager, Mourinho fully intends to deliver.