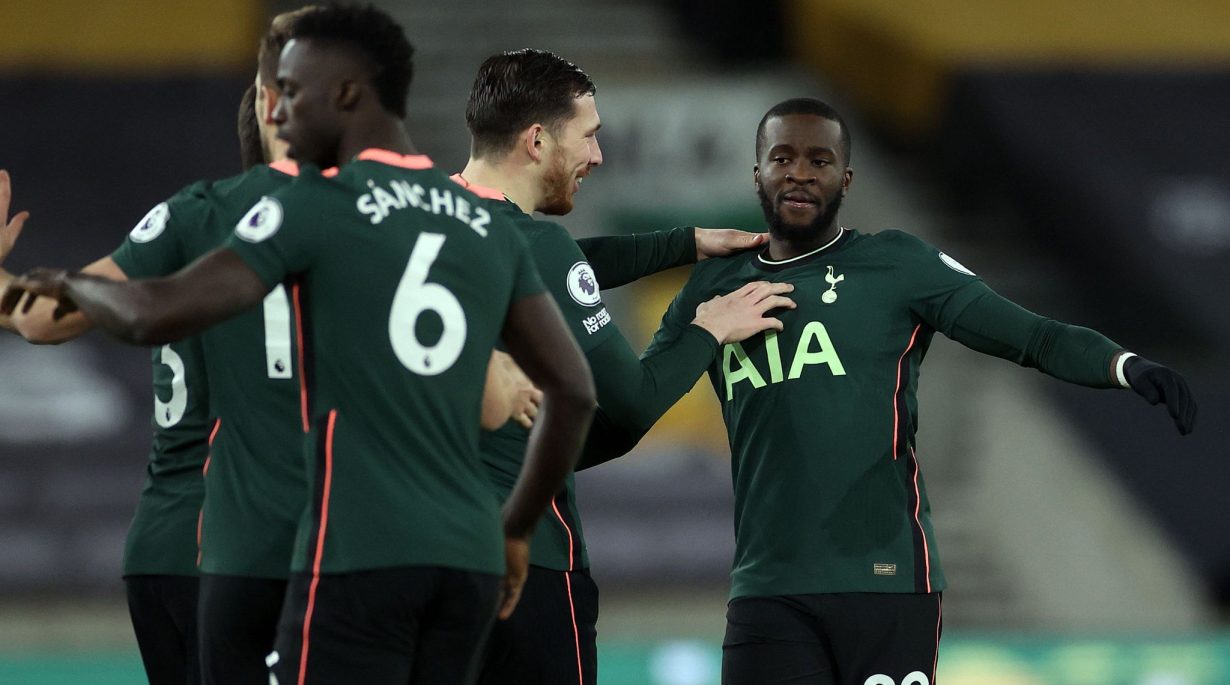 The old football adage goes that 2-0 is a dangerous lead. As against Crystal Palace two weeks ago, Spurs were about to prove 1-0 is far worse.

A late Romain Saiss equaliser consigned Spurs to a fourth successive Premier League game without a win. In truth, a point was the absolute minimum Wolves deserved from a match where the extent of Tottenham’s attacking ambition peaked inside the first minute. Tottenham’s ability to withstand pressure and counterpunch looked to have manoeuvred them into genuine title contention in November. Their lack of courage when in possession during December, just as swiftly, has moved them to the periphery.

Having seen leaders Liverpool unexpectedly drop points at home to West Brom, this was a game Tottenham had to win. The speed with which the Spurs forwards started the match gave them the perfect platform for victory. Within moments of the kick-off, Kane invited Son to chase a long ball into the Wolves box. The angle was against the Korean, but his shot forced Patricio to parry the ball behind for a corner.

Son whipped the resulting kick towards the near-post where Kane and Cody vied to make contact. Skidding off the Wolves skipper’s head, the ball broke to Ben Davies in space on the far side of the area. Davies set the ball back to Ndombele, whose instant drive caught an unsighted Patricio cold as it sped past him and into the net.

Wolves, who had scored a paltry 14 goals in 14 games before this one, looked ripe for the taking. Instead, Tottenham – playing five at the back in an attempt to negate the home side’s threat from wide – decided to make navigating the remaining 89 minutes with a clean sheet their top priority.

This caution was a pity particularly for Ndombele who enjoyed perhaps his best 45 minutes in a Spurs shirt in the first half. The young Frenchman is a unique talent among the Premier League’s ranks. His knack of escaping double-locked midfields with combinations of twists and turns is one of the most exhilarating sights in the division. A swivel down the right-wing and exchange of passes with Son, saw Ndombele free himself to supply Reguilon with a left-foot cross on thirteen minutes. The Spaniard’s flick- header narrowly drifted wide of Patricio’s far post.

Soon after Ndombele collected an errant pass deep in his own half and launched a driving run into Wolves territory. Such is his complete mastery of the ball while running at top speed, a slight shimmy sent two Wolves players skittling into each other. Suddenly Spurs had a three on two and a chance to double their lead. Reguilon darted left, Kane right. Ndombele opted to feed the wing-back rather than the goalscorer, the result was predictable. Reguilon’s weak shot was comfortably fielded by the Wolves keeper. It was a piece of play from Ndombele worthy of a goal. It was also virtually the last we would see of Spurs as an attacking threat.

Wolves increasingly looked to make inroads down the Tottenham left looking to supply the electric – if erratic – Adama Traore constantly. A cross flashed into the near post from that side of the pitch almost brought an equaliser on 27 minutes. Fabio Silva met Nelson Samedo’s centre with a first-time strike that rippled Hugo Lloris’s net. Thankfully for the rooted Spurs keeper, the shot had gone outside rather than inside his post.

The home side went close again before the interval. Davinson Sanchez could only head down Traore’s cross to the edge of the box, where Podence fired in a half-volley that drew a smart stop from Lloris. As the half drew to a close Tottenham were incapable of keeping possession for any length of time. Harry Winks – prefered to Sissoko after a promising Carabao Cup outing in midweek – could not find the passes to ease the mounting pressure. Spurs were relieved to make it into the dressing room with their lead intact.

Within seconds of the restart, Fabio Silva took a dramatic tumble in the Tottenham area that received the VAR treatment. Not even the slow-motion replays from myriad angles could make the ‘contact’ on the sole of his boot from Eric Dier look more than the merest tickle. No penalty.

The pattern for the remainder of the game was firmly set. Wolves on the front foot, Spurs sitting ever deeper as they attempted to hang on. Only Harry Kane’s ability to engineer the award of free-kicks from minimal contact – sometimes even less than that – offered the Tottenham defence and their heaving chests a breather.

With half an hour to play Neto skipped past the toiling Winks and sent the ball low across the six-yard box. It pinballed around the shins of those crowding the near post before breaking to Fabio Silva. The Wolves forward couldn’t bring it under his spell before Lloris bravely smothered the danger. In short order, Mourinho introduced Bergwijn for Reguilon, not before showing the Dutchman a series of diagrams that certainly did not read: attack, attack, attack.

Ndombele was also hooked for the perceived security of Sissoko. With ten minutes remaining, Son gave the ball away dangerously in the right-back position. The forward’s presence in that area a further testament to his manager’s ‘hold what we have’ mentality. Neves’s low curling shot from the turn-over was gathered well by the busy Lloris.

The old football adage goes that 2-0 is a dangerous lead. As against Crystal Palace two weeks ago, Spurs were about to prove 1-0 is far worse. With four minutes to play, Traore ran at Davies and drew a corner from the dogged Welshman. Neto flighted the ball to the front post where Romain Saiss stole a march on Davies and Kane and planted his header into the back of the net. With Son already withdrawn for Lamela, there was little prospect of a Tottenham resurgence.

The full-time whistle confirmed that Spurs have now dropped a total of nine points in the final ten minutes of games this season – the most in the Premier League. Mourinho must learn his lesson if the North Londoners are to abate what is becoming an increasingly bleak mid-winter.