The link attached is from Sweden (link won't embed), where the local derby fans united to protest against the evolution of the modern game.

All pre-arranged between opposing fans, in Unison. 1st Ten minutes were like the library, and then the place errupted.


NLD anyone? Each side could burn copies of their respective Annual Reports.

The Fighting Cock
I just watched that to the end, that's fucking glorious.
Comment

"The protest was ostensibly against what the supporters felt was unfair treatment by the press over incidents of fan trouble at previous derby matches, although a spokesperson also spoke in broad strokes about “everything that’s gone wrong with the game.” It’s a powerful reminder though of the intense passion supporters bring to football, a passion which sometimes borders on the unruly, but at its best can also serve to remind the powers at be that football would not exist without the fully-formed human beings in the stands."

Flav said:
I just watched that to the end, that's fucking glorious.
Click to expand...

The same is taking place in Denmark. Here some groups are doing different actions against modern football.

AGF (Aarhus): Same situation as AIK Stockholm and Djurgaarden IF (above video), they play a massive amount of monday matches, which are not suited for football fans, who want to travel and follow their team. They have done some silence protest over the past 2 years, with and without succes. The most recent was a succes i reckon, since the news took it up as "bad of the sport".

FC Copenhagen: Denmarks Man City/Chelski. This so called "club" is nothing but a company. 2 years ago the administration decided to make a new system which meant, supporters wanting to go to away matches needed their fingerprints screened before the matches and an ID-badge (which costs money from the club) to get into the stadium. The fans did a 6 month strike from all away matches. This didn't seem to make any impact on the administration.

Brøndby IF: The most successful club in Denmark's history, has done a lot to try to change the impact modern football has on the football environment in Denmark. The ultras have a good dialogue with the club, but on away matches everything the tifo-group plan, get's banned in the door. The biggest derby in Denmark is the game between FC Copenhagen and Brøndby IF. Last year the FC Copenhagen administration decided to raise ticket prices for the match + they needed every fan to scan their fingerprints before the match. As a result they did a boycot of the match. Instead they supported the team in the days leading up to the match, at training, following the bus from Brøndby to Copenhagen. Here's some videos:

Another example from the same match two years ago, the Brøndby tifo-group got the big tifo they had planed banned (we are talking 8-10.0000 pounds worth of material) even though it had been accepted before they made it. A couple of days before the match, when the group was at the gates at the time arranged with the FC Copenhagen administration, to set up the tifo, it all was banned because it wasn't fireproof - which it in fact was. The result at the match was this:

We can discuss if this is the right thing to do, but fact is, something needs to be done.

A new TV agreement was just signed in Denmark last week, which means the a full round in the best league will be played over 4 days from friday to monday. In my head this is a very bad thing, and I hope one day we will be back to saturday only.

These were some tales from Denmark. It might not interest you guys, but now that the topic was made, I could just as well give you a look into what is going on in Denmark. And if you didn't already read it out of my post, the club I support in Denmark is Brøndby.

And if anybody, by any chance, or whatever, wan't to have a look at what's going on in Denmark and abroad here is a thread (in Danish) from a ultras forum.

57 pages, dating 4 years back, about what is being done for (media, companies ect) and against modern football: http://www.fanatikos.dk/debat/viewtopic.php?t=1658
Comment

The dispute in Swedish football has (finally) come to where the fans have set hard against hard. The action, which was quiet for 10 minutes, has been running since the game round started in Superettan on Monday and are therefore all teams with active supporters.

There are many things they are dissatisfied with, above all, leadership in SvFF (Swedish Football Federation), the disciplinary committee's judgments, the media's one-sided focus on hooliganism and violence and broadcasters spread of matches, which makes many supporters find it hard to follow their team.

If you want to read more, you can click through to Aftonbladet's website (http://www.aftonbladet.se), where they have let the fans make their voices heard and together with key people from the SvFF consider themselves the 7 main requirements "Positiv Läktarkultur" (positive stadium atmosphere) sets.
Comment

From some of the background reading I was looking at earlier, their was a wider remit on 'weakness' by the SFF with the example cited regarding the money coming from international rights from video gaming (EA Sports). Due to the disproportionate amount of money went to English and Spanish Football Associations via FIFA for IP rights.

'Market Forces' it's killing football as we might have once known it, however I can't see Spurs being able to take the moral high ground on this one!
Comment

madsnTHFC said:
And if anybody, by any chance, or whatever, wan't to have a look at what's going on in Denmark and abroad here is a thread (in Danish) from a ultras forum.

57 pages, dating 4 years back, about what is being done for (media, companies ect) and against modern football: http://www.fanatikos.dk/debat/viewtopic.php?t=1658
Click to expand...

Although I did watch 'Forbrydelsen' don't think my linguistic skills are cunning enough currently to read through that.

I would be intrigued as to what the concensus is on football from the continent, is EPL viewed as complicit in all of this 'balance of power'?
Comment

Yup, spot on tricky. It's a spiral without an end. It's a shame, really.

I have the feeling that Spurs won't too. Just look at the Olympic Stadium... Yes, in the end we backed out, but if we had won the bid, how many of you think we would have moved? I for one do.
Comment

Me and the majority of the active danish fans are against all seater stadiums, as we like to stand up and sing with our fellow fans. It kind of shocked me when I visited WHL, that on the big screen, a message appeared that if you stood up, you could risk getting thrown out.

The all seater stadium trend started as a result of the Hillsborough disaster. They felt security was better with numbered seats all over the stadium, but is it really? I think, if you let the right amount of people in, disasters as this will not happen. Look at Dortmund, Westphalen Stadium (or now Signal Iduna Park - gay). 20.000 or maybe more standing fans, jumping, screaming, you name it. No seats and no accidents. In Denmark we have (again) Brøndby. They active fans have their own stand were there is no seats. Only here the capacity is around 5-7.000 i believe. No accidents either.

This is more or less the only criticism I can find on the subject. All seater corporate stadiums with no heart. Made in England, I'm afraid. For me that's what really started it all..

Other than that, an European Cup away against a British team is the best match for a Danish supporter. And all Danish people love the English national team because of their fans and commitment to travelling.

So to sum up, the general feeling "an average dane" has on the EPL is really good. But people, who look behind the great football that is being played there, can see that it isn't all good. I hope you catch my drift. I will gladly explain myself better, if you wan't me too

Fact: EPL is bigger than the national league(s). Matches on allways. Actually we have a channel called TV2SPORT - Premier League. 24 hours a day EPL coverage.
Comment

The Fighting Cock
This is amazing reading. Compare them to our supporters who eat up the bollocks Sky Sports feed them.
Comment

I could go on, but what I wrote before pretty much sums it up.

I forgot this photo though. It's related to the boycot of the Copenhagen derby match earlier this year. The news made it's way to Dortmund, and their fans showed off this banner during their match the same weekend: 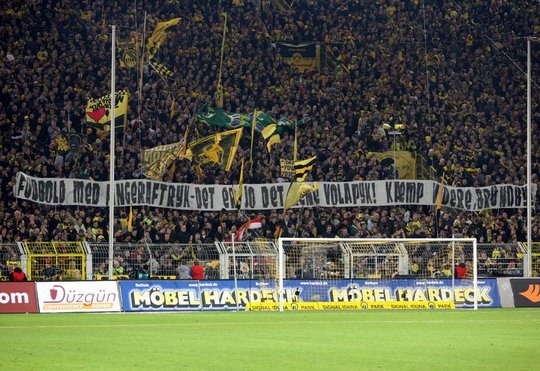 (Banner is in Danish and reads: Football with fingerprints - it's complete gibberish! Keep fighting, Brøndby!)

It Germany they are fighting modern football as well with many great initiatives. Like the protest in Berlin last year (http://www.widget.demotix.com/news/4726 ... an-culture). But in general the supporters of many German clubs does excellent in trying.
Comment

Flav must be campfiring as he's reading all this!
Comment

The Fighting Cock
Shows how far we are up our own arses.