daveyboy88 said:
this new 5 sub rule benefits contes system more than any other. can keep them wingbacks fresh who without a doubt have the most physically demanding job. probably the most demanding position in football full stop. the only problem is we probably have only 2 wing backs who are sufficient right now in doc and perisic .
Click to expand...

The wingback system really does mean those guys have to cover ground and, unlike joggers (Eriksen) they have to do it at speed. To be able to rotate both wing backs in every match could really see us pressure teams until the last whistle rather than blowing out of our arses in the 2nd half.

Brian Fantana said:
Hopefully we’ve only seen the tip of the iceberg of it
Click to expand...

Whilst I'm not a huge fan of Richarlison, he is better than Lukaku.

Did Lukaku forget everything Conte had taught him once he signed for the chavs? More likely, Tuchel didn't know how to utilise the strengths that Lukaku has.

So, if Conte is driving the signing of Richarlison, then he clearly has a plan for how he will fit into our team. I expect his hold up play to improve massively when he plays centrally (if H is out for whatever reason).

And like Diego Costa, a Conte favourite until Antonio told him to feck off out of the club by text message, I anticipate Richarlison being coached into an intimidating, physical, nightmare for opposing defenders.

Very Interesting! The tweet above says we are very close to hiring Gianni Vio to join as Conte's backroom staff.

Below is an article about him from James Horncastle written last year.

Italy players scattered like a kit of pigeons outside the Doge’s Palace in Venice’s St Mark’s Square.
As Lorenzo Pellegrini stood over the ball, carefully calibrating his aim in preparation for a free kick, eight of his team-mates divided themselves into two lines of four and positioned themselves in front of the Poland wall.
The crowd in Gdansk turned and looked at each other quizzically.
Poland goalkeeper Lukasz Fabianski was confused too, spitting in his gloves and wondering what on earth was going on. 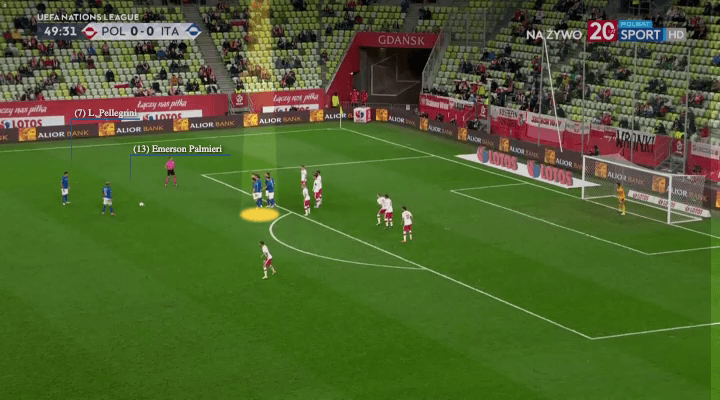 All of a sudden, just as Pellegrini started his run-up, one of the blue walls broke up like a dandelion hit by a gust of wind. Four Italians were on the move.
One sprinted back towards Pellegrini and called for a pass, the others turned on their heels and dashed into the Poland penalty area, pollinating the defence with panic. 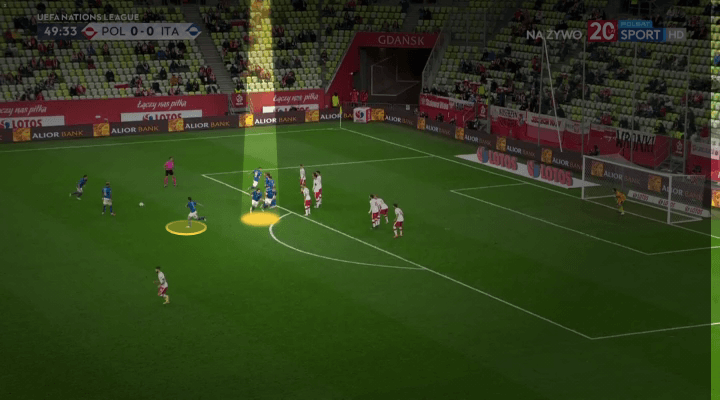 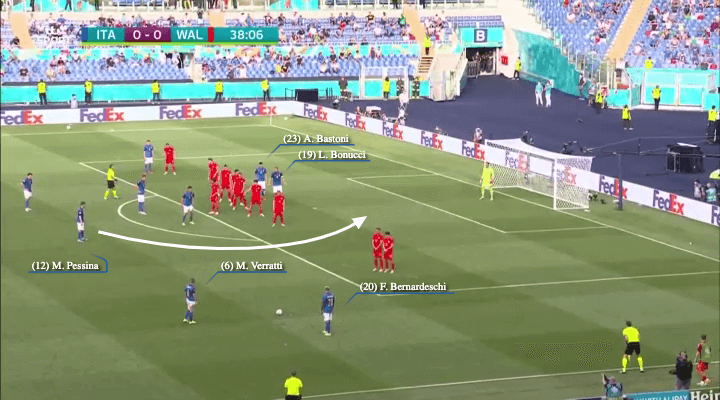 In this breakdown, the attention is drawn to Alessandro Bastoni and Leonardo Bonucci, who took up offside positions behind the Welsh wall.
That’s one of the things Vio wanted goalkeeper Danny Ward to be misdirected by.
But as Marco Verratti ran up to the ball, the two centre-halves stepped back onside and the threat came from outside the box instead. “He’d always send a man running past the first man on the edge of the wall,” says Zenga. And that’s exactly what happened here, with Matteo Pessina catching out Joe Morrell to score the only goal of the game.


After half-time, Mancini’s side came close to doubling their lead with another clever free kick.
Italy obscured Ward’s line of vision with not one wall but two, one either side of the Welsh rearguard. 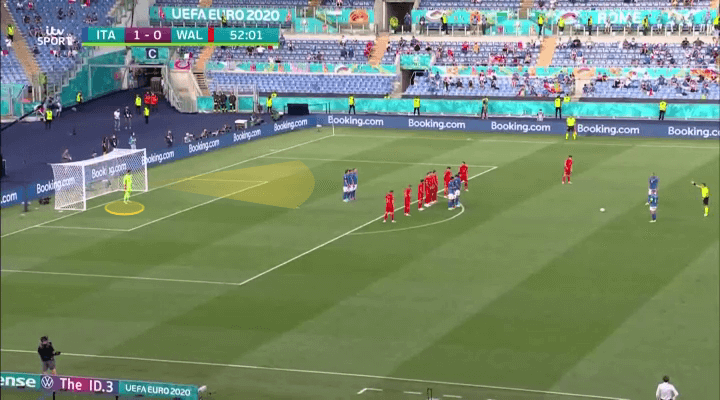 The deeper wall then rejoined the main one and got to work creating the angle for Federico Bernardeschi’s shot. 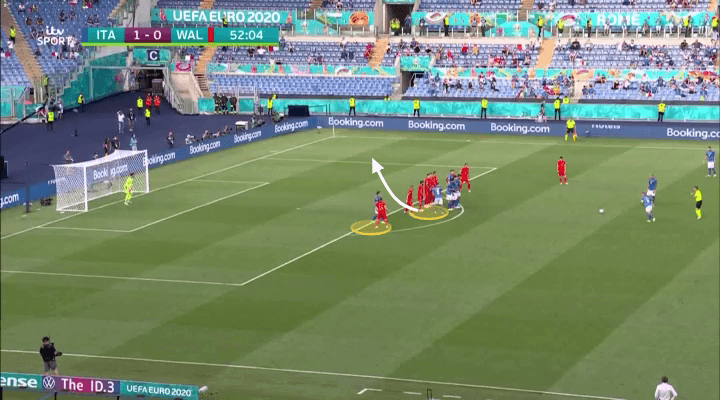 One Italy player bent his run to draw his man away from where the versatile Juventus player wanted to shoot. The other blocked a Wales defender so Bernardeschi suddenly had clear air between him and the goal. A big Pink Floyd fan, it was as if The Wall never existed. On this occasion, Bernardeschi was unlucky and hit the post, just as Giorgio Chiellini was when his goal from a corner against Switzerland in the second group game got chalked off for handball.
“Gianni’s got so many moves,” former midfielder Davide Baiocco says, while reminiscing on their time together at Catania. “He likes the element of surprise and has lots of players co-ordinate their movement at the same time. On set plays, I’d put myself in an offside position, then make a counter-movement to come back onside and attack the same space again so I wouldn’t be marked in the seconds before our free-kick taker was preparing to hit the ball. It causes defenders all kinds of problems, because they don’t know who to mark.”
You can see it here, in a Nations League game last September, where Italy placed two lines of four behind the Bosnia & Herzegovina wall.
Knowing where they plan to go next is impossible for the Bosnians. 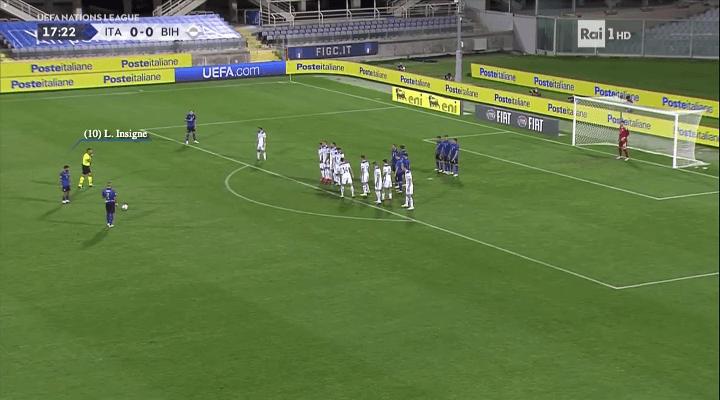 As the set piece developed, a couple of Italians stepped back onside, where they were free either to block, make a dash for a prospective rebound or run in behind to connect with a dinked ball over the top. 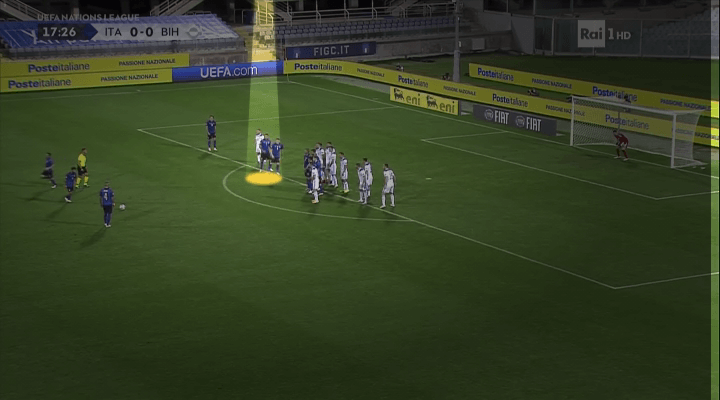 “Gianni studies his opponents hard,” Baiocco continues. “He knows whether a team is better at defending the near post than the far post and who moves first.”
Details like this matter and, in the end, could be the difference in Italy winning the Euros next month for the first time since 1968.
“Mancini knows this is a short, seven-game tournament and set pieces can help decide it,” Zenga said.
Sat at his desk in Belgrade all those years ago, he could never have predicted the doors a simple email might open.
Zenga effectively found Italy another striker, not another Ciro Immobile or Andrea Belotti. Not even a footballer. But someone who was busy crunching numbers at the Unicredit bank in a suburb of Venice.
Almost two decades later, Vio is another reason to bank on the Azzurri this summer.

Nice to see Winksey putting in some strength conditioning.

I hope he stays.

As a 10 year old, I clearly remember this WC and being slightly confused by his reaction to scoring... He seemed to be saying "NOOOOO!" when I thought/assumed he'd be happy, and should be saying "YES!"

This was my first introduction to Continental goal celebrations!!

Then again, I was probably quite a stupid 10 year old!

1882 said:
As a 10 year old, I clearly remember this WC and being slightly confused by his reaction to scoring... He seemed to be saying "NOOOOO!" when I thought/assumed he'd be happy, and should be saying "YES!"

This was my first introduction to Continental goal celebrations!!

Then again, I was probably quite a stupid 10 year old!
Click to expand...

Have people only just started to follow Spurs since Nuno?

We were one of the most aggressive teams in Europe under Poch! Weird.

Guido 🇺🇦 said:
Have people only just started to follow Spurs since Nuno?

We were one of the most aggressive teams in Europe under Poch! Weird.
Click to expand...

Yeah but we lost our aggression since Dembele left.

When we were at peak Poch in 2016/17 that was elite aggressive Poch ball.

Shadydan said:
Yeah but we lost our aggression since Dembele left.

When we were at peak Poch in 2016/17 that was elite aggressive Poch ball.
Click to expand...

But we WERE one of the most aggressive teams in Europe.

Ever since that cunt Mourinho rocked up and his adoring fans hung on every word of that god alwauful puff price Amazon doc they think we were a team of ballet dancers. Winds me right up.

Guido 🇺🇦 said:
But we WERE one of the most aggressive teams in Europe.

Ever since that cunt Mourinho rocked up and his adoring fans hung on every word of that god alwauful puff price Amazon doc they think we were a team of ballet dancers. Winds me right up.
Click to expand...

Yeah exactly we were but then we dropped off, now we're getting it back.

Shadydan said:
Yeah exactly we were but then we dropped off, now we're getting it back.
Click to expand...

yeah, I know but it's still dressed up as if it never happened.

Guido 🇺🇦 said:
yeah, I know but it's still dressed up as if it never happened.
Click to expand...

Maybe because it resulted in nothing to people just assume that the typical lazy narrative of Spurs being bottlers is associated with Spurs having a weak underbelly. 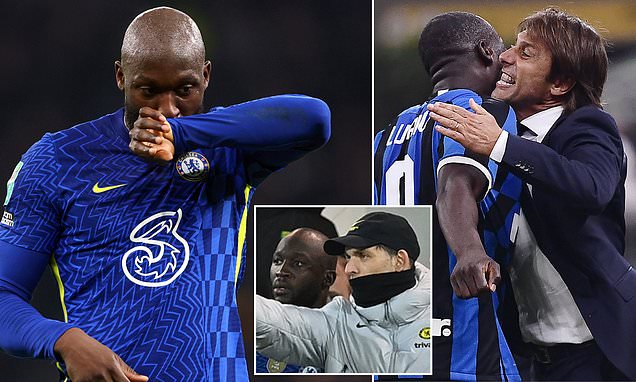 Tuchel's 'daddy' joke 'broke his relationship' with Lukaku at Chelsea

Chelsea manager Thomas Tuchel reportedly 'broke his relationship' with unsettled striker Romelu Lukaku when he made a joke about his old boss Antonio Conte that 'didn't go down well'.

REVEALED: Thomas Tuchel 'told flop Romelu Lukaku ''there's your daddy'' when he saw Tottenham boss Antonio Conte on TV' - in a 'joke' that angered the No 9 as their Chelsea relationship collapsed​

By BEN WILLCOCKS FOR MAILONLINE

Chelsea manager Thomas Tuchel reportedly 'broke his relationship' with Romelu Lukaku when he made a joke about Antonio Conte that 'didn't go down well'.

The unsettled Belgian striker completed his loan move back to Inter on Wednesday, less than 12 months after arriving at Stamford Bridge for a club record fee of £97.5million.

Lukaku, who scored just eight times in 26 Premier League appearances last campaign, made no secret of his desire to return to the Italian giants during a contentious interview with Sky Italia last December.

Tuchel's bond with Lukaku reportedly fractured after he made a joke that 'didn't go down well'.

Whilst watching a game involving Spurs, the Blues boss offended Lukaku by joking that Conte was his 'daddy', according to GOAL reporter Nizaar Kinsella.

The journalist, who was speaking on The Italian Football Podcast, claimed that the incident exacerbated the relationship between the pair.

He explained: 'To see him talk so highly of Inter was an insult to Chelsea fans. It broke the relationship with them.

'And there was another incident behind the scenes that wasn't televised or anything like that.

'Someone told me that Lukaku and Tuchel were watching a Tottenham game and Tuchel said, ''There's your daddy'', about Antonio Conte.

'It was just a joke, but apparently, it didn't go down very well with Lukaku.'

Upon touching down in Milan on Tuesday to complete his medical at the club, Lukaku greeted Inter fans with a smile and handshakes, delighted to put the troubling Chelsea spell in his wake.

Meanwhile, the west London club are on the brink of finalising a deal worth £55m plus add-ons for Leeds winger Raphinha.

Sorry for being a dick, Bazali

All on Conte now. Club could not have done more to support him.

Fucking loved that. Make 50/50s into 70/30s, leaving a mark on every tackle and Dier looking like he’s going to fucking murder someone.