Could be an interesting team selection. I would hope Japhet Tanganga is also involved - he is out of contract at the end of this season, and unless involved (assuming not injured) its very possible he's off in January or the summer, which would be a shame as he was a revelation in the 4 pre-season matches playing at CB and RCB against some decent strikers.

Mourhino watched the last u23 match so quite possible that one or two of those will be involved - Jamie Bowden (CM) scored a hattrick so might be the obvious one to be involved, probably from the bench. Harvey White (CM) not really involved in that match but might well be involved on the bench. Cirkin (LB) name checked by Mourhino a week ago and said he'd be joining first team training, but might be too early for him, so maybe 19th man ?

Probably likely a few 'fringe' or infrequent (in Jose's first 4 matches) starters will also have a chance to show what they can do.....step forward Mr Lo Celso ? But I hope the team also involves a few of the more experienced players to give a framework to slot some of the less frequent starters into.

Subs to include : Whiteman or Austin, Foyth, Bowden, White ? 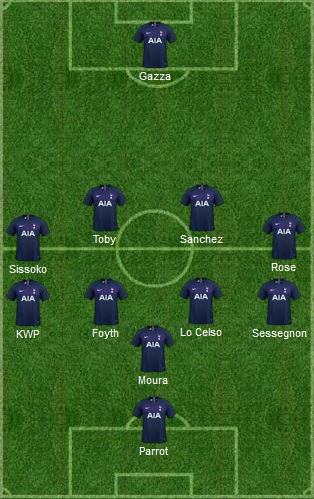 why are we rushing the often injured Ndombele back for a meaningless game?

Whatever team he picks, I hope to see Alderweireld and Sanchez at CB. Those two need to play every game together and get to know one another. It’ll be an onslaught in this game so good chance to work on defensive tactics. Of course Bayern don’t need to win this either so perhaps we’ll see a much weakened team from then too
Comment

Must admit I've spent a lot of money to go and see a reserve game!
Seriously, always wanted to go to Munich and really looking forward to it.
Comment

It will be interesting to see if Rose starts.
He won't be picked for Euro 2020 if he ain't playing.
Comment

Lo Celso has to start and play as much of the game as possible.

Be very much interesting to see who turns up and puts in a quality shift for this one.
Comment

Mrs Perryman said:
Must admit I've spent a lot of money to go and see a reserve game!
Seriously, always wanted to go to Munich and really looking forward to it.
Click to expand...

Germany is always fun in my experience.... Love the local humour. Have yourself a blast!