Walker is getting back to his best game by game too, did well to limit Enrique and Downing - that Assaidi that came on was in his pocket too, they concentrated on Jan after that.
Comment

BainsXIII said:
Walker is getting back to his best game by game too, did well to limit Enrique and Downing - that Assaidi that came on was in his pocket too, they concentrated on Jan after that.
Click to expand...


That bloke was exactly what we needed, he came on and gave the ball away every time he had it.......it re-leaved so much pressure from our back four.
Comment

Thelonious said:
Can't agree with you there, BAE is easily best equipped to deal with that kind of winger. He's easily the best LB in our squad and he's played against similar in the past and come through with flying colours.
Click to expand...

Fair enough. Maybe I'm remembering the BAE of old whenhe would get turned and do niggly fouls, pulling shirts etc.

Or maybe I'm mis-remembering, it's been a while. And I have stinking cold. When are the heated seats, slippers and small personal electrical heaters arriving at the Lane?
Comment

I would like to thank whoever decided on Liverpool's Black'n'Grey kit... the dye was cast the moment I saw them trot out in that, in EXACTLY the same way I feared the worst at the emirates last week when WE did exactly the same thing (what is it with American kit manufacturers, do they HONESTLY think RED and WHITE clash??? The Stoke v Newcastle match last night was surely closer, seeing as they BOTH have WHITE STRIPES in their kit! )

...but if, as I suspect, it was based on the same "The away kit ain't selling, so let's raise it's profile, regardless of the fact it makes no sense whatsoever to wear it" theory that the MONEY MEN dream up, in which case; shame on them, you've no place in football!

I realise the win was more to do with Demspey's 'clever' winning of that free-kick, and some wasteful Liverpool finishing, but let me have my moment... I wanted to see a traditional WHITE v RED clash, if we're going to beat Liverpool, I want it to LOOK GOOD! 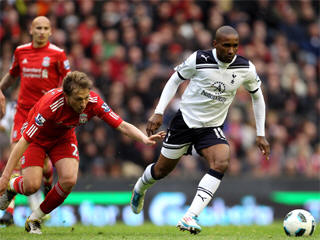 EssexYid said:
Last season I remember going to the Lane and often watching Spurs coast to a 2-0 or 3-0 victory on a regular basis. I remember leaving the Villa game thinking "I kind of miss the days where we used to hold on to a win, and made everyone really nervous". Well it's back this year!

I genuinely think Gallas' time is up. Once Kaboul and BAE are back, there's no reason to ever play Gallas again, but even until they are, I'd without question rather play Naughton at left back and put Vertonghen into the middle. Hopefully Caulker is back for Saturday though, and Dawson can play with Caulker again. I'd also think about bringing Huddlestone in for Dempsey at the weekend and let Dembele play a bit further forward. Our ball retention is poor and I think that change might help us.

The problem with that is the midfield will lack pace and that sense of composure that Dembele brings to the team playing from deep. He's such a good all rounder it's a waste playing him in that advanced role, limiting his abilities somewhat.
Comment

Or maybe I'm mis-remembering, it's been a while. And I have stinking cold. When are the heated seats, slippers and small personal electrical heaters arriving at the Lane?
Click to expand...

Yeah, he rarely gets called on it, very subtle, although not an ideal way of defending. Seems to be a worrying injury though, no return date.

Liverpool fans going batshit about the Bale 'diving' incident, even though it wasn't a dive, he was clipped by Agger.
Comment

I think Walker has been shocking most of the season, a total liability.

The last two games though he has really upped his level and been brilliant IMHO.

Man of the match last night for me despite Bales one hald wonder show.
Comment

kangar said:
Liverpool fans going batshit about the Bale 'diving' incident, even though it wasn't a dive, he was clipped by Agger.
Click to expand...

Steed_Train said:
Bet they'd take the same stance if Suarez did one of this theatrical dives and got a penalty

Quite funny that their not even moaning about Dempsey when that looked like more of a dive and led to the winning goal
Click to expand...

Supporter
went to see my hometeam play so only saw the highlights , Walker seemed decent and Lloris seemed a bit out of sorts but thats only the highlights

Loved the way they instantly recognised the importance of Dembele for the team , any news on his injury ?
Comment

I thought it would be a tight affair and it was.

I still dont think our ball retention is good enough and Dawson displayed exactly why he is no longer first or second choice defender in my opinion. His inability to pass the ball quick and calmly negates a lot of our play. He loves defending and would be a great squad player if he was willing to sit on the bench but I wouldn't blame him if he didnt. There were a few times where he made absolutely shocking passes that we somehow got away with.

Gallas is 35 years old, its not surprise to see him struggling and I actually say fair play to him. He obviously has a problem with his thigh as he often has to get it taped up to get through the games, I feel like he is playing at his absolute limit just to get by.

I also think Lennon and Bale arent mucking in enough when we are under the kosh, they tend to go missing a lot and Bale's tracking back/desire to block a cross seems to be diminishing to me.

Still, we got the win without playing great, that's a good thing isn't it?
Comment

Dru
My gf , who follows football but not as passionate as most of us said that about Bale a few times. She said : i can see why everybody loves him as a player because he is spectacular but if you look at hime during the whole game he tends to be somewhat lazy and very selfish. If he wants to be the next Ronaldo he has at least those two characeteristcs to match ...
She has a crush on Vertonghen so that partially explains her comment.

and indeed , no one can faulter Gallas' commitment , he is giving his all and i appreciate that , i really thought he was the worst thing that could happen to us when he came but he has never been the whining drama queen he used to be
Comment

I thought Lennon tracked back brilliantly, Bale less so.
Comment

No such thing as TMI

Benjoss said:
I know we've already said it in this thread. But our retention tonight was awful once they turned the screw.

Two great goals from us but we got some well deserved luck tonight.

You're bang on about Walker. I hope the wankers get off his back now.
Comment

There was a brief period in the game where we were under a lot of pressure and hadn't had the ball for a while (no I don't mean the whole 2nd half).

Halfway line to the right side and Lennon ran around chasing the ball like a pitbull on acid for about 30 seconds. Loved that, crowd responded to it too. As did players around him, started fighting.

Oh and if you were still inside at the end, either in PL or the Shelf corner, Dawson came over and done his classic fist pump and cheer. Love that!
Comment

Agree with the Walker comments. Anyone sat in Block 35 last night? I was in Row 24 and some absolute wanker behind me spent half the game slating Kyle & Vetonghen. Where the fuck do these people come from?