Hotspurio said:
Well he does well in the highlights department that's for sure

Been calling for Semedo for a few years now. Great player, even if he was a scummy Benfica cunt.
Comment

AlabamaSpur said:
Bale is going to reject all offers, play golf, and collect his 600k a week.
Click to expand...

Nothing left to prove. Play golf and get rich. Cant blame the guy.
Comment

Claud601 said:
Can’t/won’t compete with the wages city will offer but that’s what they do ad nauseum
Click to expand...

Maybe City will be enjoying a transfer ban soon too.
Comment

Hopefully having an ex-Leverkusen player in Son will help entice Brandt to join the club. I'm sure he has asked Son about the club as well.
Comment

VoiceOfThePoshSeats said:
3 champions leagues in a row. 4 in total. 3 years left at 600k a week.

Nothing left to prove. Play golf and get rich. Cant blame the guy.
Click to expand...

His agent basically said as much when he was on one of the BBC football pods earlier in the year.

Totti said:
Been calling for Semedo for a few years now. Great player, even if he was a scummy Benfica cunt.
Click to expand... If Sessegnon hasn't signed a pro contract with Fulham, Liverpool can't sign him because they are currently banned from signing academy players.

SoCalSpurs said:
To how many?

Gomes, Tielemens, and Lo Celso wouldn't be considered homegrown yet we're linked with them. It's almost like the transfer rumors are more believable if we are linked with players that play in England.
Click to expand...

risk and reward, one of the risks are that a player may not acclimatise to a league - Gomes is cheap / Tielemens is from outside of the country and the added bonus we see he can do it in the league and Lo Celso is from outside the league.
Comment

The BBC have their crystal ball out.

It's going to be a summer of significant change at Tottenham, regardless of what happens in the Champions League final.

They're looking at players who haven't quite made it elsewhere - think Lucas Moura when he was out of favour at PSG, Malcom now at Barcelona - and at players who are not the finished article.

Spurs are fond of Ryan Sessegnon and the feeling is mutual. He would have stayed at Fulham if they had stayed up, but now they're resigned to his exit. They can't afford to lose Sessegnon for nothing next summer - if he went abroad they'd only get half a million pounds in compensation and if it was a Premier League club it would go to a tribunal.

Tottenham are yet to make an offer but the sense is that a bid is incoming and it would then be down to the clubs to agree a fee. They envisage Sessegnon initially playing on the left wing before dropping to left-back long term.

There has also been strong interest in Sessegnon from Manchester United, PSG, Juventus, Borussia Dortmund and RB Leipzig. Chelsea, too, but their transfer ban and the West London rivalry rules that out.
The 18-year-old wants his future sorted before the Under-21 European Championships, which start on 16 June, but Tottenham's participation in the Champions League could delay matters.

Meanwhile, there is a very good chance Christian Eriksen will be sold this summer. With the Dane seemingly unwilling to extend his contract, Spurs will want to avoid losing him on a free transfer next year. There is a slight possibility that he could pen a new deal, with a clause inserted that would allow him to join a leading club like Real Madrid or Barcelona if they made an approach.

Previously, Tottenham have pursued Aston Villa's Jack Grealish and Zaha. Grealish is expected to leave Villa if they miss out on promotion from the Championship, while Zaha can be signed at the right price.
Further back in midfield, Spurs would like to move on Victor Wanyama and possibly Eric Dier.

Centre-back Toby Alderweireld has a year left on his contact and a £25m release clause, so if the Belgian is sold he will need to be replaced. Jan Vertonghen is also going into the final year of his current deal.

Tottenham need a back-up striker as well. Given Fernando Llorente's role in their run to the Champions League final, that could yet be him. But the Spaniard is now 34, so clearly they may look elsewhere. 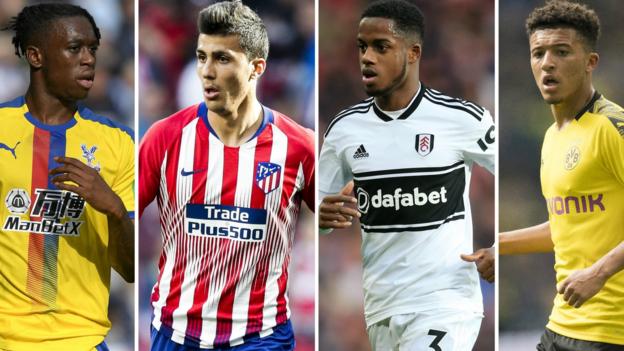 Totti said:
He was the best player on the pitch by a mile.
Click to expand...

Yes, Grealish was the best player on the pitch but we need better than what he offers.
Comment

Hotspurpaul said:
World has changed for the better?? Apart from the brexit mess, trump, kids killing each other on the streets every day with knives and terrorist attacks in virtually every country?? Yeah it's terrific.......
Click to expand...

Stopspot said:
His agent basically said as much when he was on one of the BBC football pods earlier in the year.

Gareth has negative reasons to move.
Click to expand...

reachingforthestars said:
A couple of days ago L'equip wrote that Real would announce Hazard after the Euro League final. Usually a reliable source. They believe the price to be around £87m
Click to expand...

If they lose Hazard, and without any signings, they’re already done next season. Here’s hoping.

Whilst they are allowed to sell, they would be mad to do it.
Last edited: 15 May 2019
Comment

WookieD said:
If they lose Hazard, and without any signings, they’re already done next season. Here’s hoping.

Whilst they are allowed to sell, they would be mad to do it.
Click to expand...

Letting hazard go for free next summer would be just as mad in Roman’s eyes. Though from a football perspective I agree with you.
Comment

Joshking5 said:
It was a joke mate.

But come to think of it I wouldn’t mind us tying up deals and keeping it on a hush ready to announce for afterwards. . .

Thanks for history lesson. Obviously the world's better than 50, 100, 200 years ago in that respect, but since Bale left us? It seems to have gone to shit......
Comment

I see what you did there